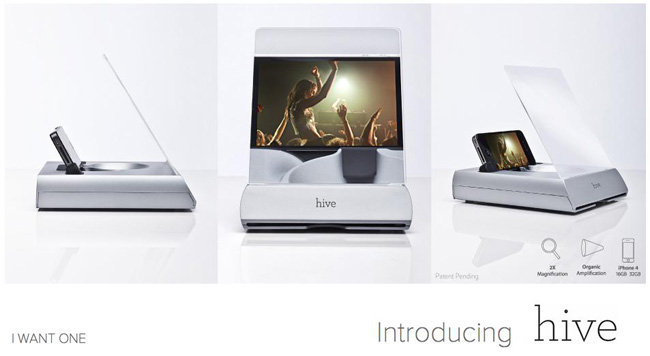 Mark this Kickstarter project as another original concept. The Hive, by Jake Waitzman of Screendoor Studio, requires no electronics or power, and amplifies the iPhone 4’s onboard speaker in both landscape and portrait orientation. It does this by channeling the sound into a concave chamber that projects upward and outward toward the listener’s ears (much like Griffin’s AirCurve). What makes it a lot different than the AirCurve and other docks is the fresnel lens. It stands parallel to the iPhone’s screen at a set distance of 4 inches, providing crystal clear 2X magnification.

Promo videos can be seen after the break.

So one could imagine the uses that the Hive could provide. Larger viewing for videos, games, internet browsing, and email composing (with a bluetooth keyboard too!). When the iPhone is docked in landscape orientation, access to charging and the headphone jack are available.

Back in January, the Hive was teased on YouTube before shown in person at CES 2011 in Las Vegas. Now it’s your turn to help pledge this Kickstarter project. By pledging at least $45 to this campaign, you are able to pre-order the Hive for $45. The unit will sell for $59.95 once it hits the retail shelves.