You know what, I won’t start this review by telling you what HippoRemote does; I’m going to tell you what it doesn’t instead. HippoRemote doesn’t display your Mac screen on your iPhone. But all the rest is just there, and it’s working greatly.

As you may know, I’m not into this all “control your Mac with a remote app” thing. I found all the apps I tried slow and clumsy, trying to poorly emulate the Mac’s interface and controls on a 3.5 inches screen. HippoRemote is a great app because it knows its limitations and tries new solutions, it mixes old and new elements and creates a cool, fresh experience.

HippoRemote by RoboHippo (these guys got the names just right) is a remote Mac (Windows and Linux are supported too) controller app for iPhone.You can control your Mac’s trackpad, keyboard and applications’ specific commands with it. It works on a “profile” basis, and it enables you create as many profiles as you wish and directly copy them into the app’s database. This, and a lot more. Let’s see what this hippo’s got, before you want to sink your teeth into it (an experience I would’t recommend, anyway.)

The first thing you’d like to try out is the trackpad emulation via the iPhone’s touch screen, so go for it. But first, you’ll have to enable HippoRemote’s access to your Mac: to do so, just click on the Sharing tab in the System Preferences, activate Screen Sharing and set a password. Now, fire up HR on your iPhone / iPod Touch, it will begin scanning the local network for a server (which is your Mac) and here you go, connect to it and type the password you previously chose. No additional apps required, it does everything via Snow Leopard’s screen sharing support. Awesome.

By default, HR opens in the trackpad mode (at least it did for me) so that you can immediately test the app’s capabilities in communicating with your Mac. Well, I think HR works really great, especially compared to other similar apps I’ve tried in these last years. Holding and moving your finger on the iPhone and seeing the cursor running on the screen is just as smooth as using Apple’s trackpad. Ok, I know that the iPhone’s screen is pretty good by itself, but HippoRemote does a hell of a job nevertheless. The implementation of the trackpad is very comfortable and well designed: there’s an empty space in the middle of the iPhone screen where you can move your finger to activate the cursor, and the usual mouse buttons are placed right above it. You can double tap on the trackpad to select a word, tap three times to select a paragraph, but what if you want to manually select something? Just hold one finger on the left button, use another one on the trackpad to select, and then you can perform an action by pressing the right button, just like you would do on your Mac. Also, HippoRemote supports multitouch gestures, but I had some problems with pinch, zoom and stuff like that. Nothing that can’t be fixed or implemented anyway. If you consider that this is an iPhone, it’s pretty clever and it definitely works throughout the whole process. Once you get the hang of it, it becomes very natural and pleasant. 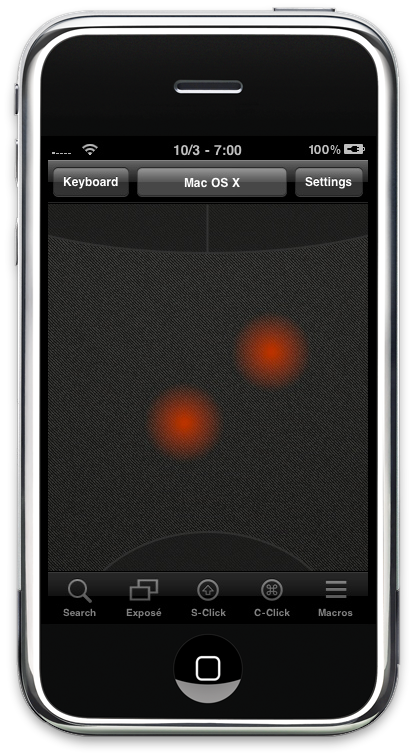 The keyboard is another feature I liked a lot: instead of placing every key on a single screen, the developers created 3 tabs (Basic, Arrows, F-keys) that contain almost every command you can ask for. You can type in the basic tab, press key modifiers and arrows in the Arrows one, have the F-keys in the last tab. A pretty cool thing about this is that key modifiers will stay pressed even if you leave the tab, which is kind of useful if you want to launch a specific command.You can also retrieve your typing history in the basic keyboard mode, so that you’ll be able to see all the things you typed before (perhaps useful for some kind of quick snippets feature). 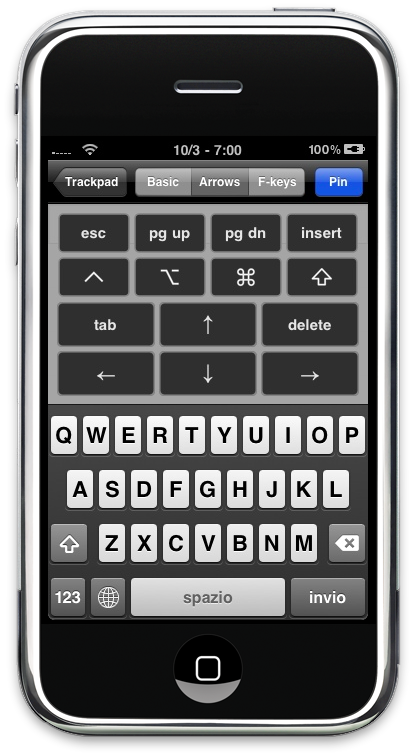 Probably the most important feature of HippoRemote 2.0, Profiles lets you control some of your Mac applications with a “dedicated” support to keyboard shortcuts and general commands. Let’s use VLC as an example: once you’ve moved to the Profile section and picked the VLC profile, the UI will change revealing some custom options to control the playback of movies and video and trigger the fullscreen mode in the app on your Mac. As you can see from the screenshots below, there are three new tabs in the bottom toolbar called Fullscreen, DvdPad and PlayPad that let you do so. Same applies for iTunes,Gmail, Front Row, even Movist and Opera are supported; HR comes with a pretty good list of supported apps built in, and if that’s not enough you can create your own profile by following a simple syntax. You can read a tutorial here. 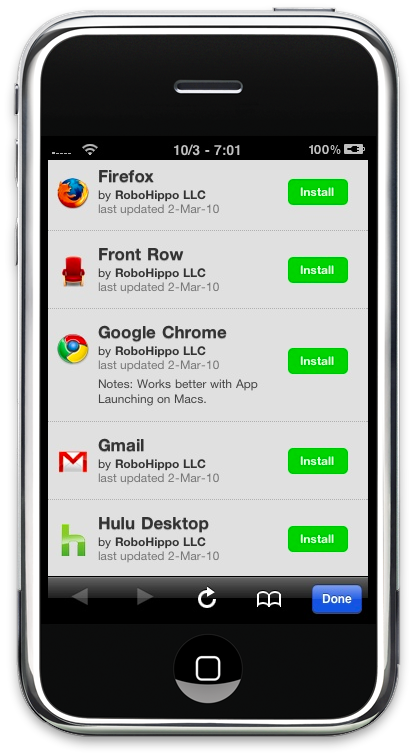 Using Safari from HR is an interesting experience too: the bottom toolbar sports buttons for going back, open a webpage (cursor goes automatically into the address bar), search (cursor goes into the Google search bar), log in (supports pre-saved logins) and activate Macros. Macros allow you to save any application specific command and activate it with a single tap instead of messing with the keyboard. You can of course create new macros directly within HippoRemote. I would also like to mention that Mac OS X profile is totally awesome: it supports Exposè, spaces, shift and command keys from the toolbar, tons of other commands from the Macros. To add this profile (and many other ones) you’ll have to download them right from the application.

Whether you’re using the Safari profile or the iTunes one, you can invoke another menu by tapping and holding your finger on screen; this menu lets you do a lot of other cool stuff. You can quit an app, browse the web, access twitter and tweet. The developers managed to include a pretty decent Twitter client, which even lets you choose between the timeline, mentions and favorites views. You can tweet, retweet an reply to people; you can access lists, pull to refresh, fave tweets, navigate through them with back and forward arrows. So, say you’re watching a movie a want to tweet something without having to leave the app you’re controlling the movie with - now you can.

The built in web browser lets you open bookmarks (you can add new ones), open and copy links to your Mac, but there’s no address bar to change the website on the go. As you can see, HippoRemote is seriously packed with features. 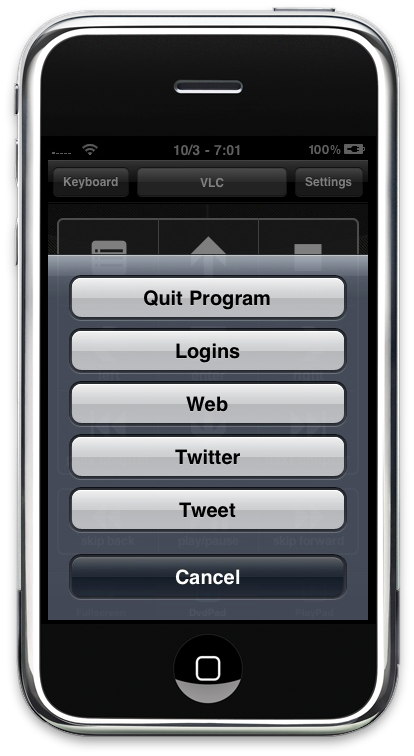 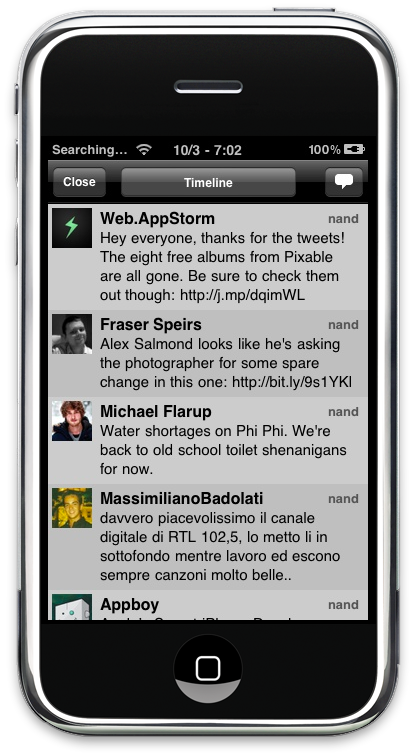 The Settings is another place you’d like to visit to customize your HippoRemote experience a little bit more. First, there are many trackpad settings to play with: tracking speed, scrolling speed, auto rotate, show scroll button and set a different wallpaper other than the default one. Tapping on “More Trackpad Options” enables you to set up even more preferences like drag lock, reverse scrolling and momentum (great). Other settings include an hotkey launcher for profiles, auto connection and quick macros.

All in all, HippoRemote is a stunning utility that makes it easy to remotely control your Mac and, most of all, packs a lot of features and commands into a simple and elegant interface. If you’re wondering whether this could be really that useful in a real life context, I say yes: I’ve been using it for almost a week now and I found myself firing it up many times while having dinner or chatting with friends just to play some music. Also, it’s a great way to work with your Mac after a long day of trackpad usage - your hands will thank you.

The Pro version iss available at $4.99 in the App Store. Go download.