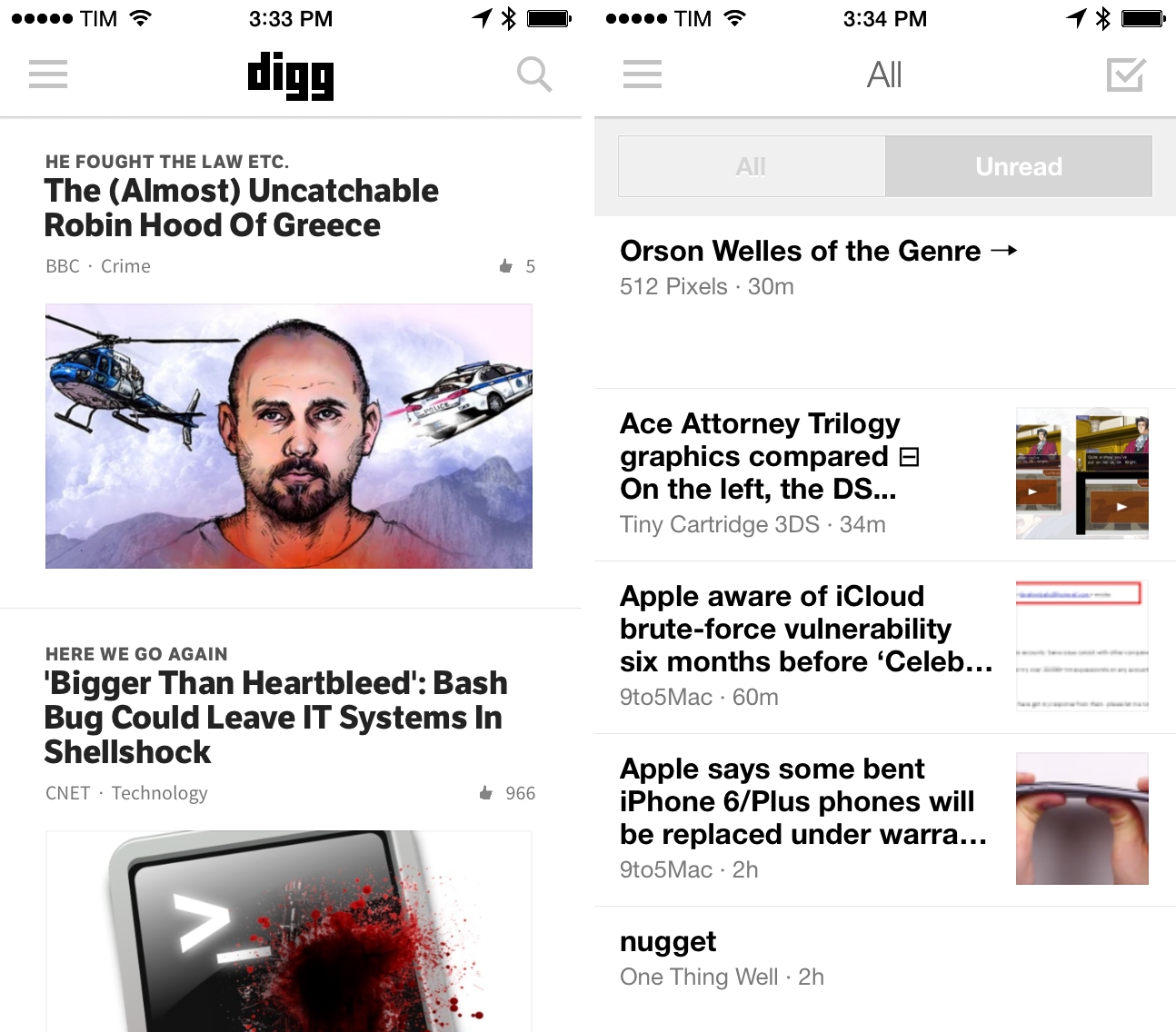 Late last week, I was looking for an RSS reader that had been updated for iOS 8. I couldn’t find any that I liked on the App Store, so I decided to give Digg a try. Yes, that Digg. I know that to many people that name may sound like a joke, but, as it turns out, the new Digg run by betaworks is a great service with a very good iOS app.

Coincidentally, Vox published a story about the return of Digg last week:

The company decided to ditch the user voting system that had been the hallmark of the original Digg. The Digg user community had become too acrimonious — and the front page too spammy — to be salvaged. Instead, the new Digg would use a combination of software and human editors to decide what would go on the home page.

In some ways, this marked a return to the “portal” vision that the original Digg had sought to replace. But this was a portal with a lot more intelligence under the hood. Betaworks has developed a sophisticated set of software tools to scour the web for interesting content and then use a variety of signals — including attention on social media sites like Twitter — to judge which articles are most interesting. The software produces a feed of promising candidates that are then curated by human editors.

I found it fascinating, and it convinced me that using Digg for a while might be worth it. The front page of Digg no longer features user-voted stories: now, it’s a collection of editorial picks chosen by the Digg staff, and I find the selections to be always interesting and timely. For example, today I discovered this profile of Greek criminal Vassilis Paleokostas and a story about lessons learned from LOST (I still love the series finale). 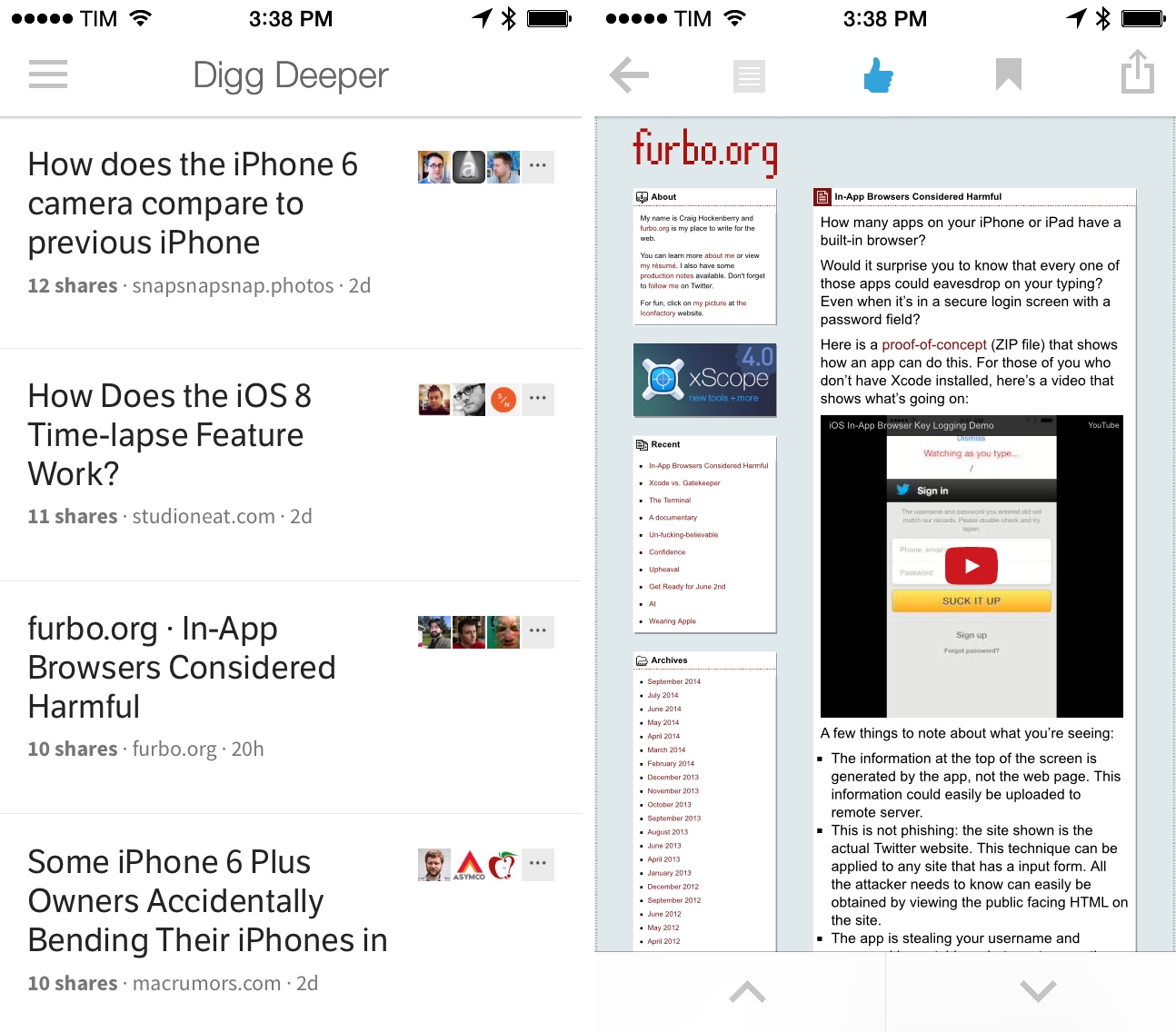 There’s also a Digg Deeper feature that, like a simplified Nuzzel, gives you the most shared links from your Twitter timeline. You can still vote stories, but you can choose to make your diggs private; thanks to betaworks, Digg has native Instapaper integration and it can optionally add every article you save to your Instapaper queue.

The RSS functionality is part of the Digg app in what’s called Digg Reader. I imported my RSS subscriptions with an OPML file, but I had to recreate folders from scratch. As an RSS reader, Digg doesn’t have all the settings and options of apps like Reeder and Mr. Reader, but it covers the basics well and it’s a good iOS 8 citizen. Your reading position is synced across devices, refresh times are fast, and the app is clean and easy to use. Interestingly, Digg leverages betaworks technology to show articles from your RSS subscriptions that are popular – think of Instapaper’s sorting options, but for feeds. I like this kind of innovation in the RSS space. 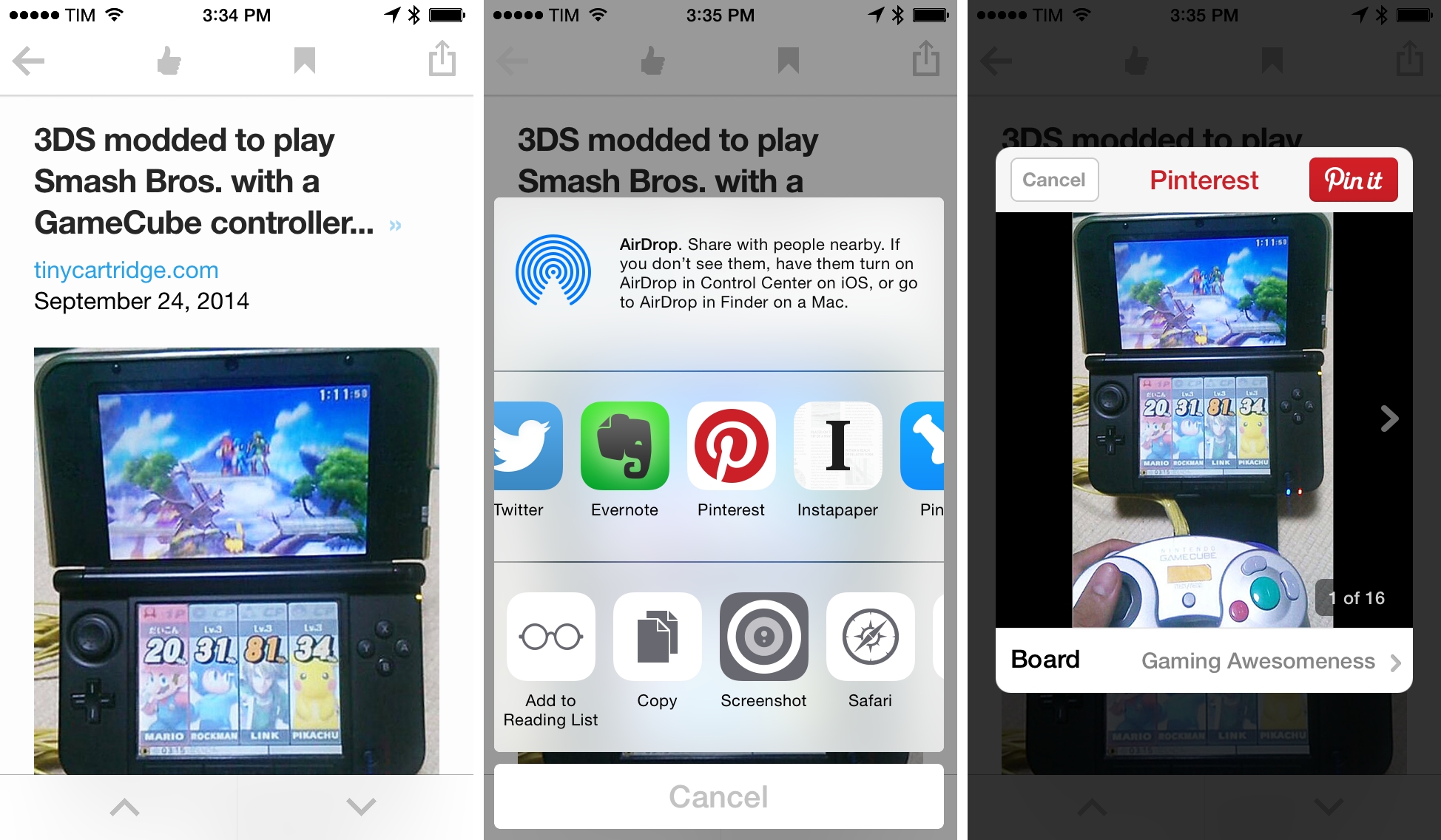 More importantly for my daily use of RSS, the Digg app supports action and share extensions. I can quickly save a URL to Evernote or bookmark it with Pinner without leaving Digg. Quite impressively, the Pinterest extension can be used in the app and it will find images or videos in the article you’re reading, which you can then save to a board. It makes for a great demo of iOS 8’s capabilities.