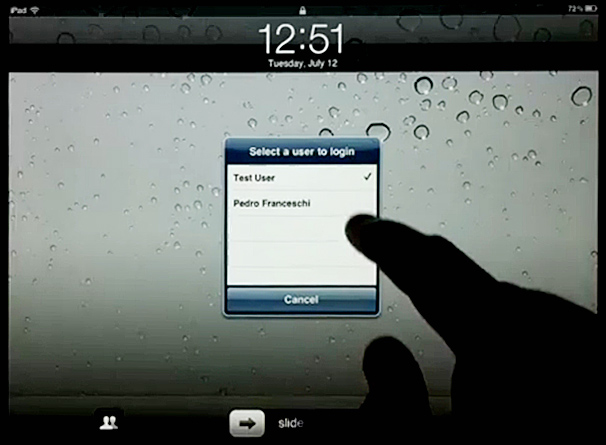 Everyone may not have to share Macs and iOS Devices with others, but there are many of us that do. For the Mac, it’s easy and a great idea to set up User Accounts for times when someone needs guest access or has a different OS setup than what we normally use from day to day. A common complaint for iOS users is that there are no User Account options, only parental controls and such. Dave Caolo recently posted on 52 Tiger how to child proof your iPhone, which we recommend reading. He lists many ways to child-proof your iOS device but an easier way for Apple to do this would allow User Accounts on iOS devices.

iUsers for iPad is a Cydia hack for jailbroken iPads by Pedro Franceschi that gives you something close to having OS X’s user accounts. The hack is set up inside Settings.app » Extensions » iUsers. Add a user by simply tapping “Add User”, insert a name, passcode and choose whether they have admin rights or not. This means each user can have their own set of app positioning, home screen wallpapers, settings, etc. Now this won’t save your iPad from wondering fingers or accidental App Store purchases but it does offer some deal of restriction for your personal iPad setup.

According to the video, if you want to switch accounts once they are added, simply go to the lock screen and tap the Accounts button. The iPad does a quick springboard reboot (which could bother some people) after selecting the account you want to open and it even remembers apps states for each account. Obviously this is dangerous for backups, but if you want to try something like this, it looks cool.

This isn’t Pedro’s first Cydia tweak, back in May we showed you PhySwitch, which lets you cycle through apps with the volume keys. iPad Jailbreakers, if you want to try out iUsers, add the repo: cydia.iblogeek.com to see it in your Cydia apps.

Demo video after the break.