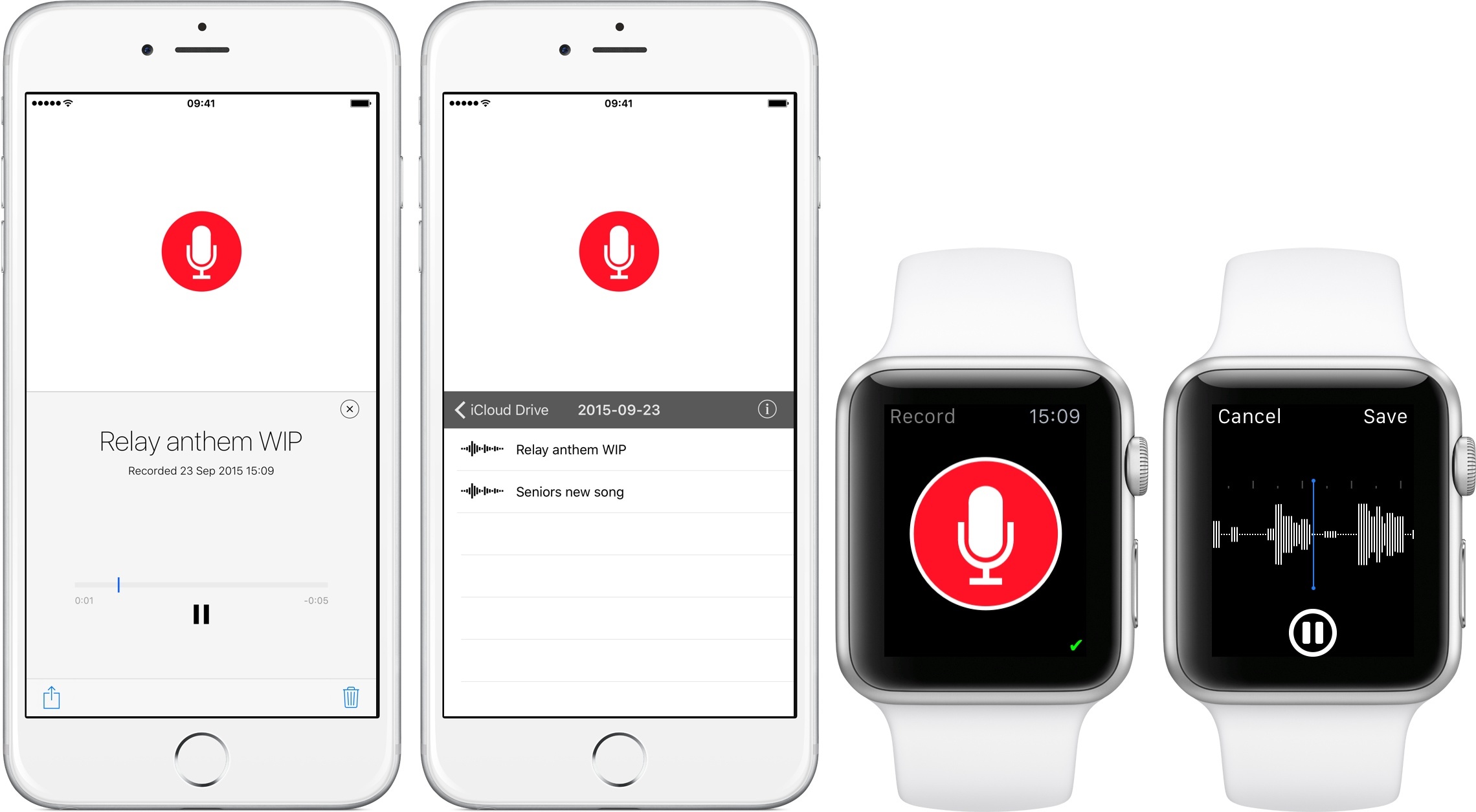 Among the various first-party omissions on watchOS 2, the lack of a Voice Memos app for Apple Watch is perhaps the most curious one. Given the OS’ support for audio recording and playback, a native Voice Memos app for the Watch would be an ideal companion for capturing ideas and audio notes anywhere. Just Press Record, a $2.99 Universal app, wants to provide the missing voice recorder for Apple Watch users.

Just Press Record has a minimal interface with a big red microphone button in the middle of the screen. Tap it to record, tap it again when you’re done. Recordings are saved as .m4a files with a timestamp as their filename; the playback UI consists of media controls, a date, and buttons to delete and share the file using system extensions. Just Press Record can record audio in the background on iOS (start recording and close the app), and it supports Slide Over and Split View on the iPad.

On the Watch, the app is extremely simple with a button that you can tap to start recording. Audio recordings are automatically sent to the iPhone app once saved, which is indicated by an upload icon in the bottom right corner (it turns into a green checkmark when done). Thanks to watchOS 2, the app launches fast, performs well, and it can even be used in Airplane Mode or when your iPhone is out of range. You’ll still be able to record audio, and files will be sent to the iPhone on the next connection.

Last, Just Press Record uses iCloud Drive as a storage backend between devices, and in my experience it has worked reliably under iOS 9. Files are organized in folders by date, and they carry the filename you choose in the app. iCloud sync has been fast in my tests, and because it always works in the background, I don’t have to worry about exporting my files or make sure they’ve uploaded successfully.

In this first release, Just Press Record doesn’t have a glance or complication to launch the app with fewer taps. Similarly, there’s no support for Spotlight search in iOS 9, so you won’t be able to search for audio files and jump to them. These are minor complaints, but I’d like to see them addressed in the next releases.

I wouldn’t be surprised to see more Apple apps coming to the Watch in the near future, possibly with watchOS 3. In the meantime, though, Just Press Record is a simple, fast voice recorder that uses iCloud Drive and the superior performance of watchOS 2 to let you record audio in a few seconds from your wrist, whenever you want. The app’s compatibility with iCloud Drive and iPad (and OS X) is a welcome plus, as it allows audio recordings to be used anywhere.

If you’ve been looking for a way to quickly record audio from your Apple Watch and find it again later on your iPhone, Just Press Record is available at $2.99 on the App Store.