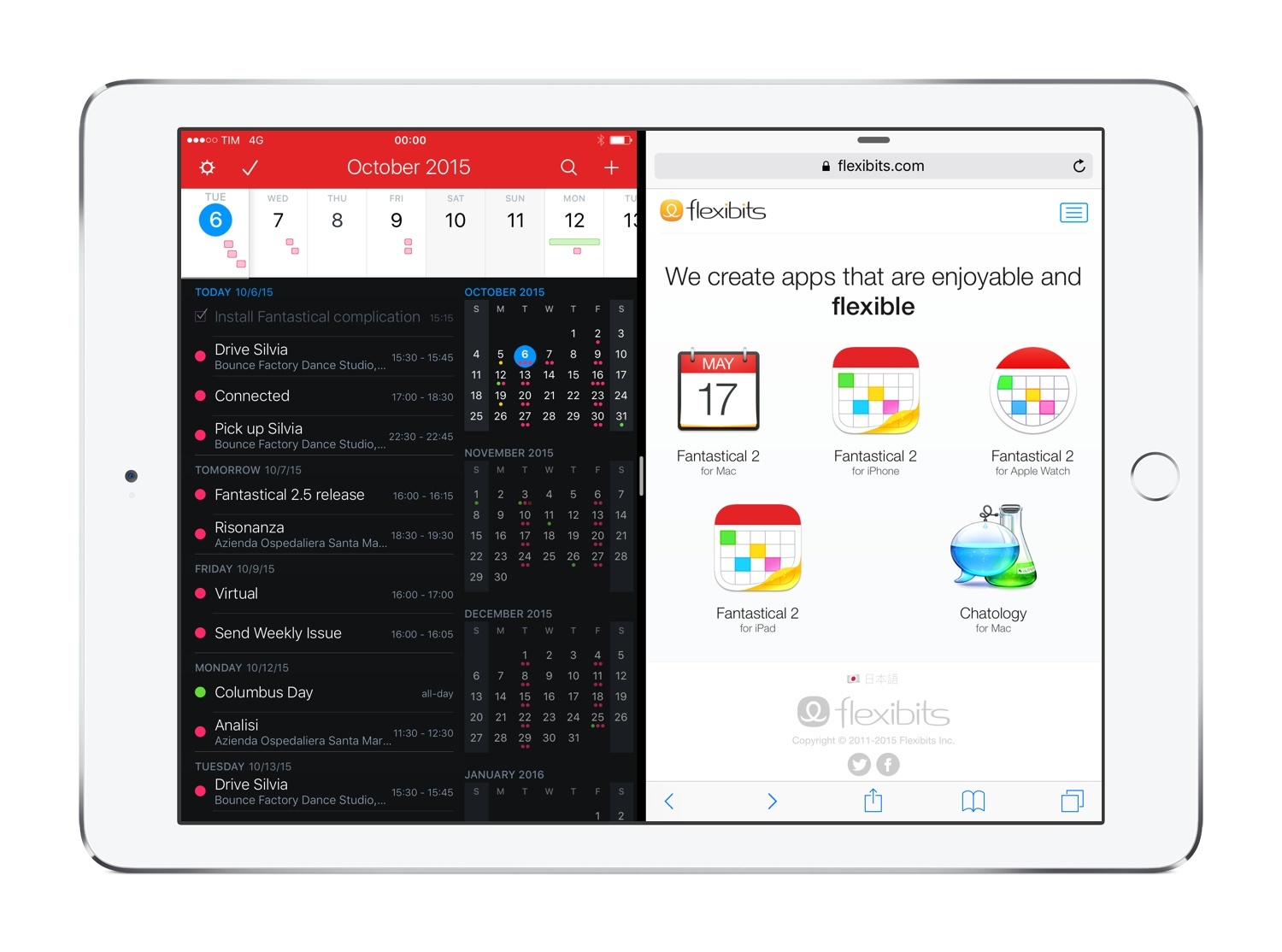 Despite my appreciation for Apple’s updates to the Calendar app on iOS 9, I still find Flexibits’ Fantastical to be the more powerful, flexible Calendar and Reminders client we deserve. Fantastical is an app which I’ve loved covering over the years because of Flexibits’ unwavering commitment to quality. Today’s 2.5 update continues to confirm the indie studio’s penchant for new versions that truly take advantage of what iOS has to offer. 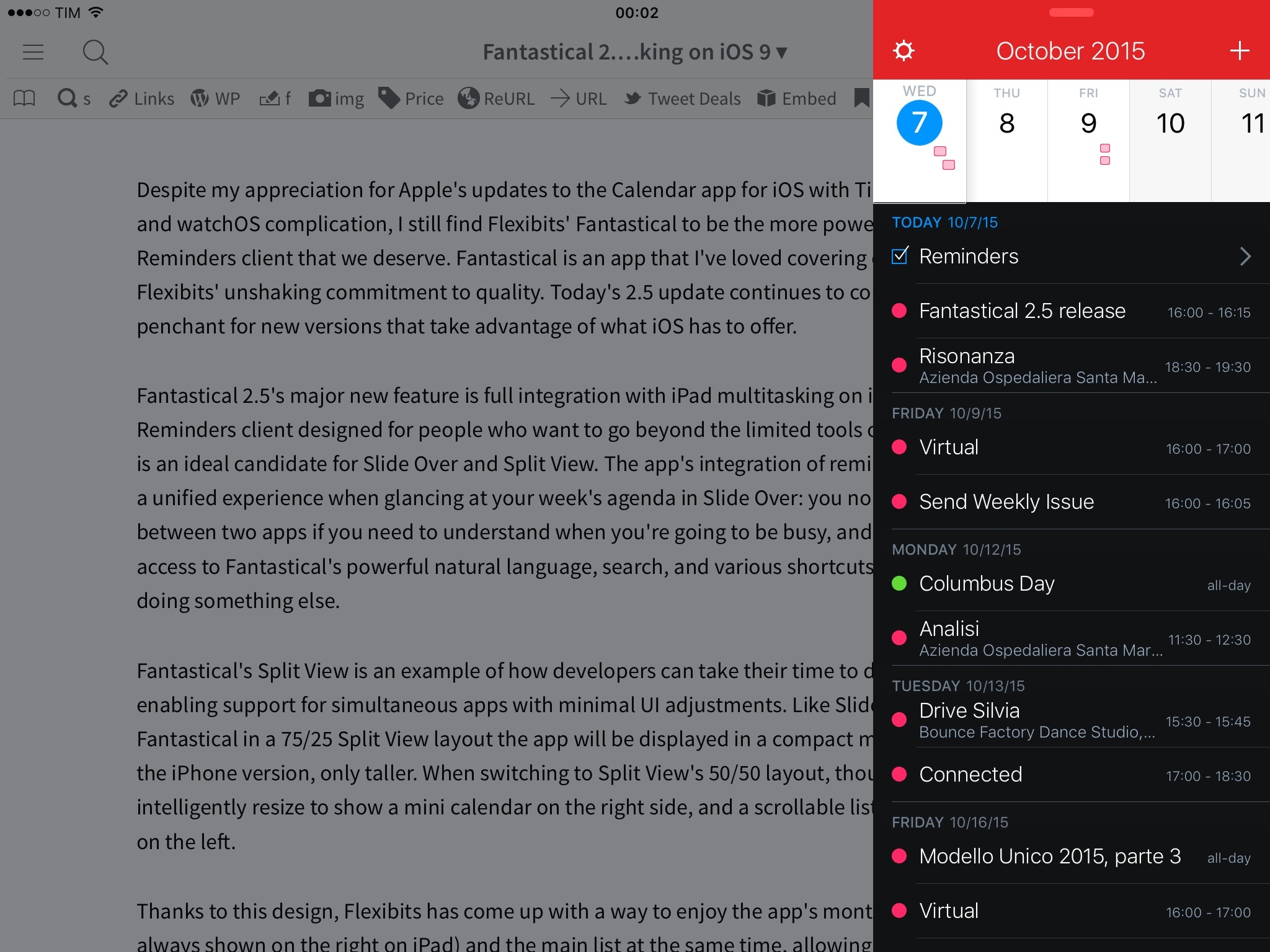 Fantastical 2.5 in Slide Over.

Fantastical 2.5’s major new feature is full integration with iPad multitasking on iOS 9. As a Calendar and Reminders client designed for people who want to go beyond the limited tools of Apple’s apps, Fantastical is an ideal candidate for Slide Over and Split View. The app’s support for reminders and events allows for a unified experience when glancing at your week’s agenda in Slide Over: you no longer have to jump between two apps if you need to understand when you’re going to be busy; in the process, you’ll have access to Fantastical’s natural language input, search, and shortcuts to manage items.

Fantastical’s Split View, on the other hand, is an example of how developers can take their time to do more than simply enabling support for simultaneous apps with minimal UI adjustments. Like Slide Over, when using Fantastical in a portrait Split View layout the app will be displayed in a compact mode that resembles the iPhone version, only taller. When switching to Split View in landscape, though, Fantastical will intelligently resize to show a mini calendar on the right side and a scrollable list of events and reminders on the left. 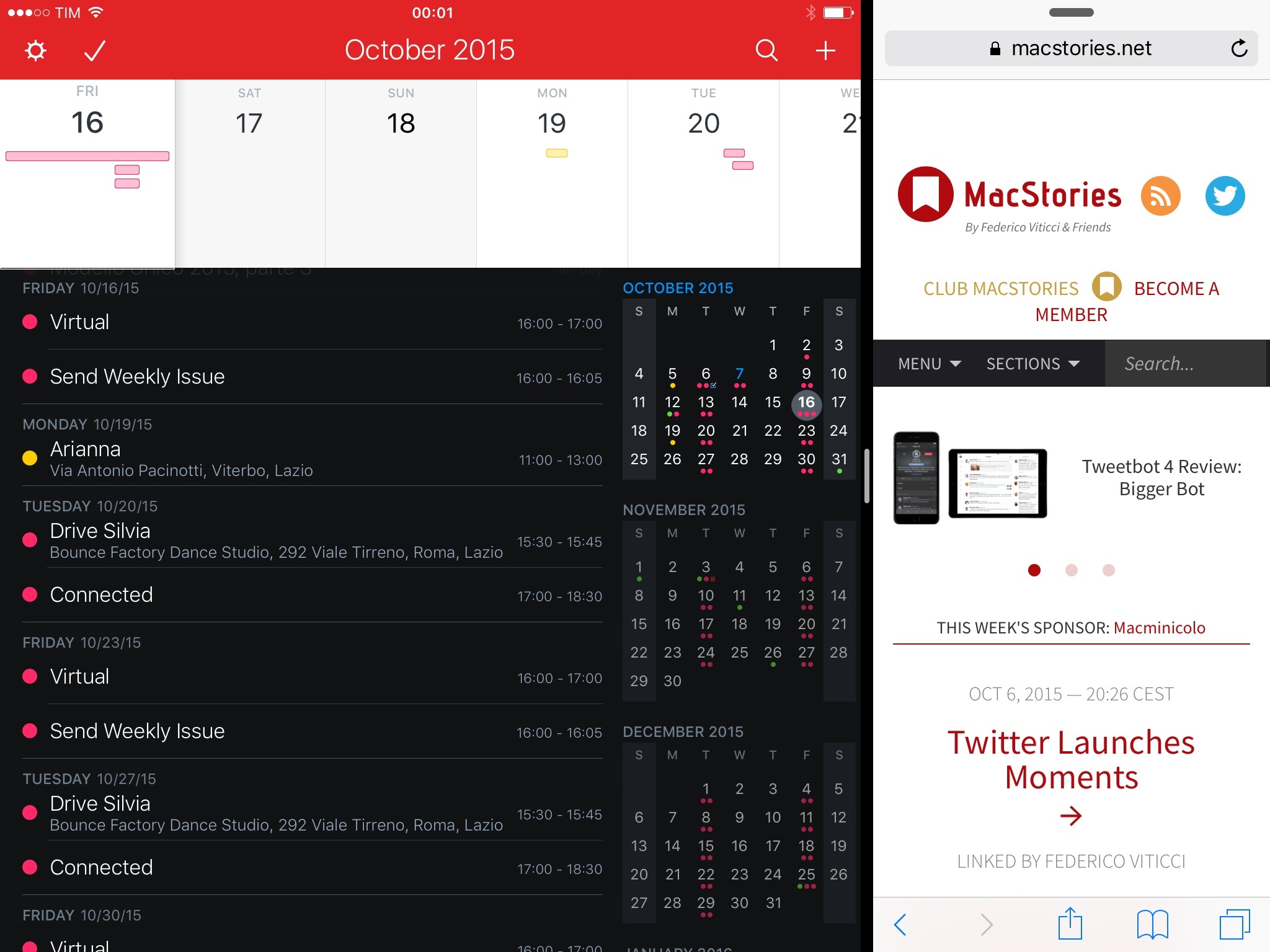 You can tap days in the mini calendar, which scrolls as you scroll the event list on the left.

Thanks to this design, Flexibits has come up with a way to use the app’s monthly calendar (the one that is always shown on the iPad) and the main list at the same time, allowing you to scroll both lists independently from each other, with event indicators for each day of the month. When using Fantastical with Split View in landscape, you won’t be limited to a single sidebar of information as most iPad apps are doing on iOS 9: you’ll see events and reminders with the same functionality of the full app, plus a narrow calendar column that brings faster navigation and the ability to glance at your schedule with a bird’s eye view.

Combined with external keyboard shortcuts, this makes Fantastical 2.5 for iPad a solid update with a superior use of the iPad’s screen and iOS 9 capabilities. In my tests, I appreciated the ability to pin Fantastical as a secondary app: version 2.5 lets me, for example, use Messages and Fantastical concurrently, looking at incoming texts on the left while confirming events for the near future and my availability for upcoming months. The result is an integrated experience that makes Fantastical for iPad desktop-class in terms of information density. Fantastical 2.5 is one of the best takes on iPad multitasking so far – if anything, it shows why apps like Tweetbot should consider multiple columns for Split View as well.

Fantastical 2.5 also brings improvements to the iPhone app, most notably with a revamped watchOS 2 app that builds upon its Apple Watch debut with faster performance and a new Fantastical complication. 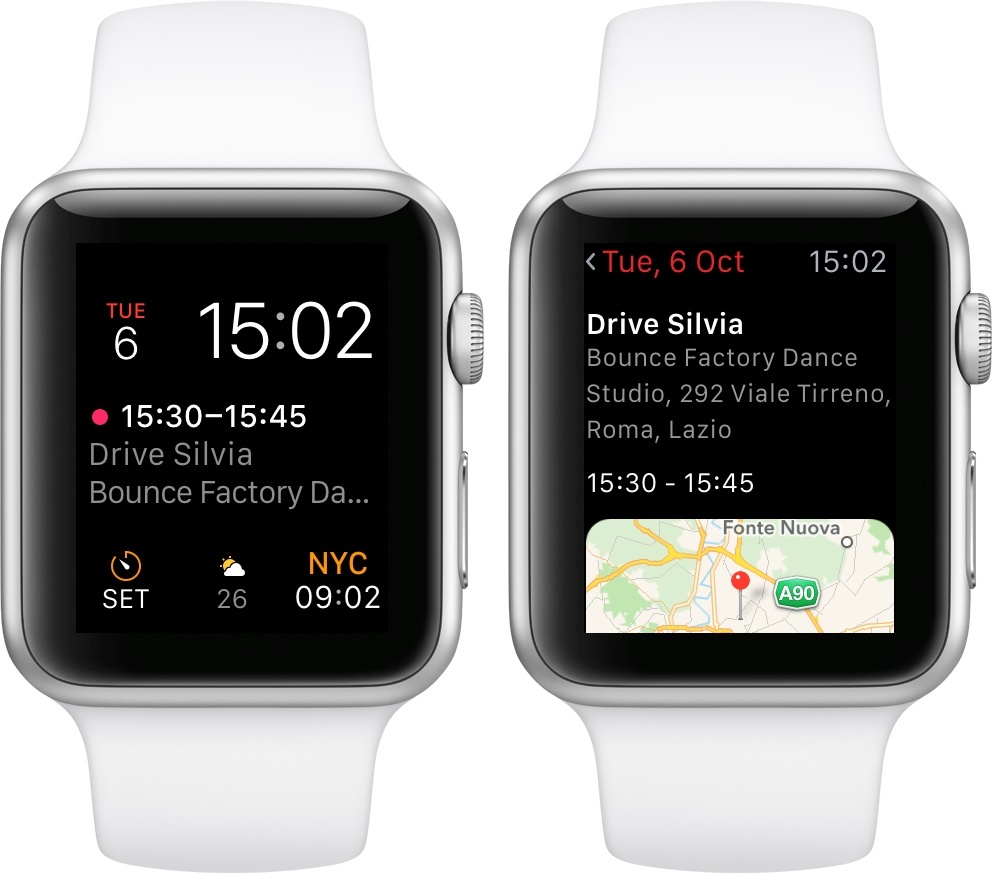 On the watch face, Fantastical’s complication can be installed as a large widget in the center of the Modular face, a smaller ticker in the Utility face, or as a counter for the total amount of items due on the current day, displayed as a ring. As a fan of the Modular face and multicolor complications, I’m happy with Flexibits’ approach: the Fantastical complication shows events and reminders with colored indicators, due times, and a description of the item. You can tap the complication to be taken to the relevant section in the app, which loads faster thanks to watchOS 2 and which keeps the list-based design of the original Watch app. Fantastical directly benefits from the addition of Time Travel in iOS 9: by spinning the Digital Crown, you’ll be able to look up events and reminders in the future – something that Apple doesn’t allow you to do simultaneously.

The most important change in Fantastical for watchOS 2, in fact, is the ability to manage events and reminders in a fast app that can be extended to Glances and the watch face. I find Apple’s decision to not ship a Reminders app for Apple Watch to be a baffling one: my girlfriend and I have a few shared lists where we save items we need to buy and things we need to do, and having that information available on our wrists would be a great use case for the Watch. 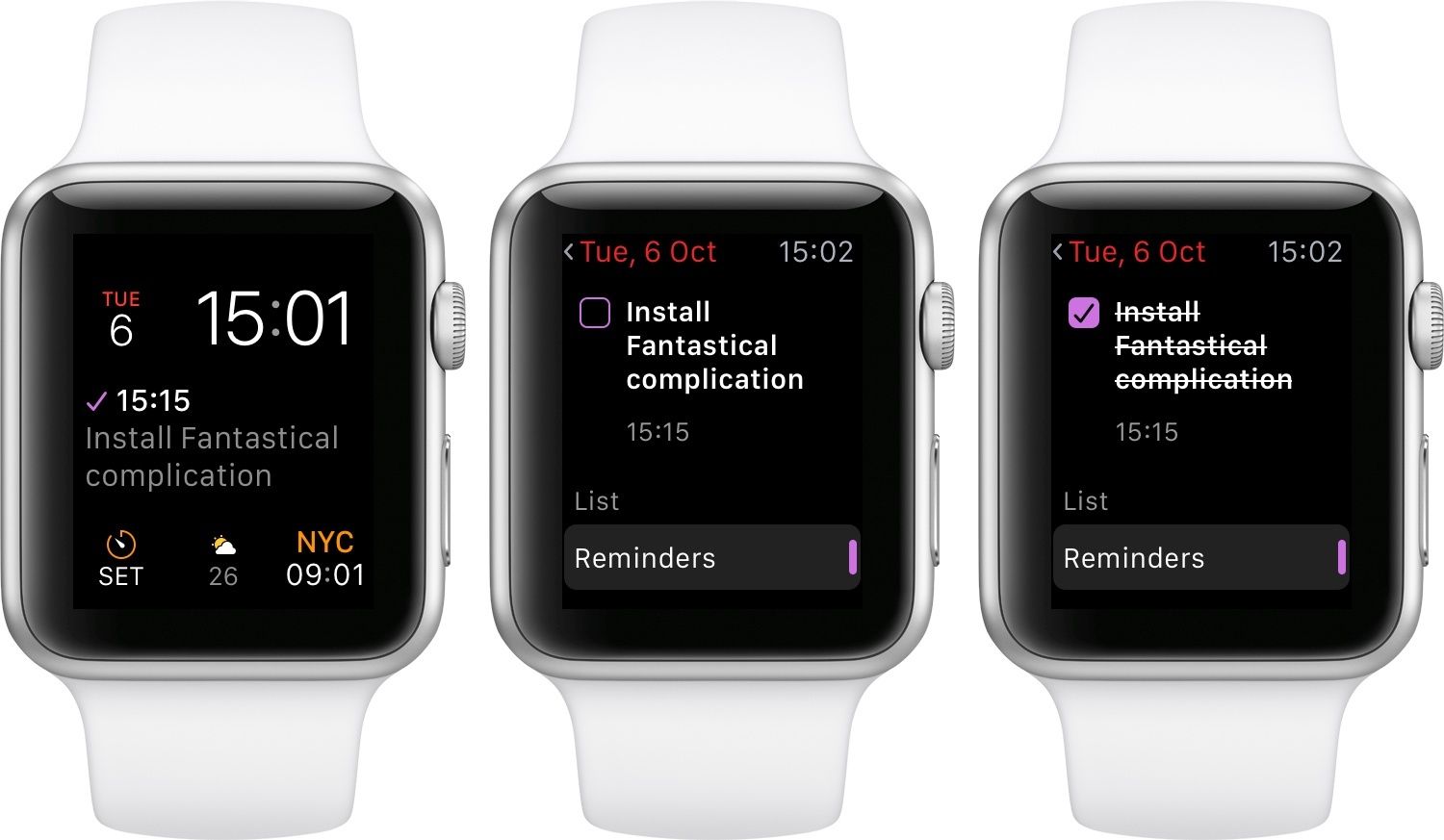 With Fantastical, we can now keep a shared calendar on the watch face with a complication, so we can both keep abreast of appointments in an easy and unobtrusive way. Similarly, we can finally access Reminders lists and check off items with a faster Apple Watch app, which has turned out to work well when grocery shopping or walking through IKEA. And, Fantastical’s glance continues to be my favorite calendar glance to date, with a useful visualization of the day ahead and better performance thanks to watchOS 2.

With Fantastical 2.5, Flexibits is showing how to implement Split View and rethink an iPhone app for Apple Watch. Split View in Fantastical does more than the typical iPad Split View; on the Watch, existing work from earlier this year has been refined and extended. In both cases, Fantastical 2.5 may appear as an iterative update with minor improvements; in reality, it demonstrates how new OS features should be approached without rushing them to the App Store.

Fantastical 2.5 is available on the App Store for iPhone and iPad.