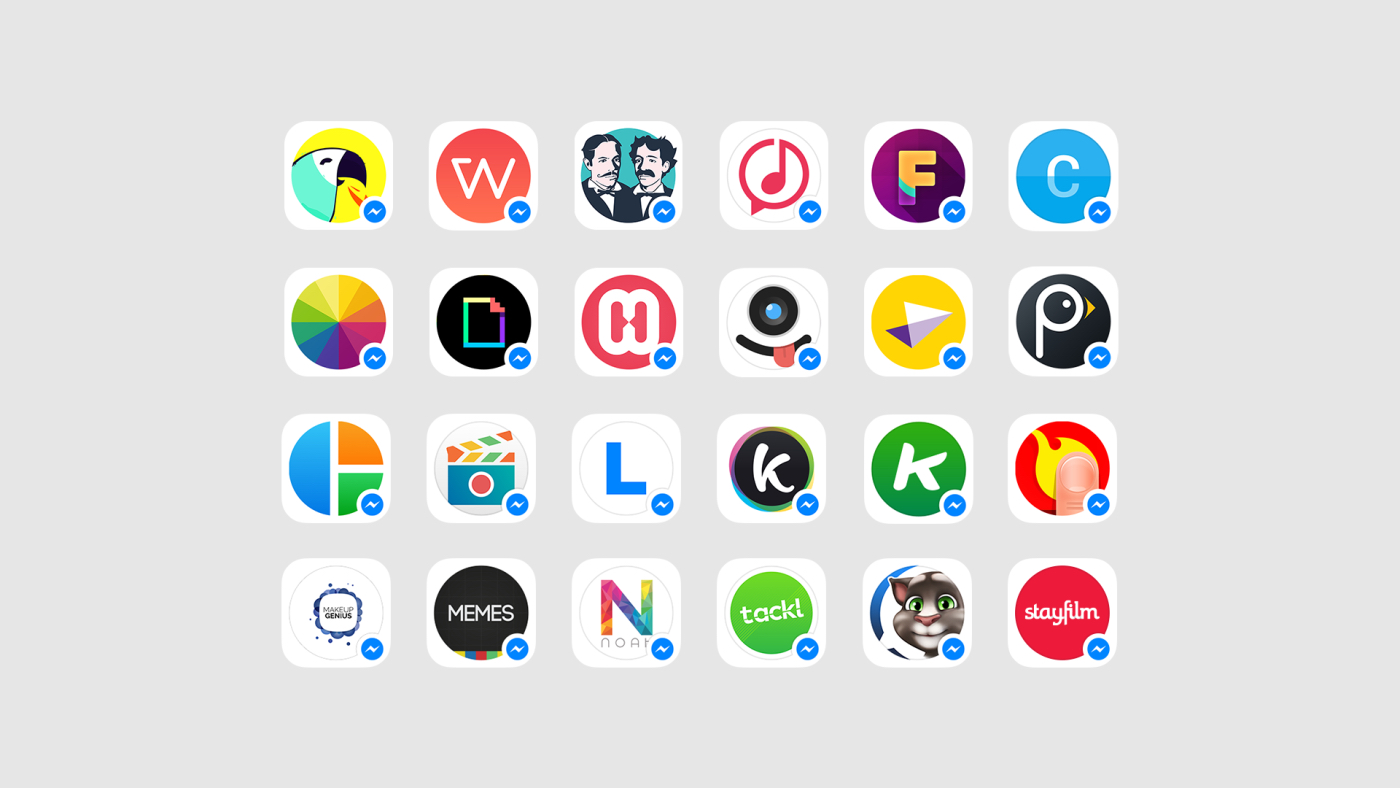 Over at Fast Company, Sarah Kessler has a good summary of Facebook’s Messenger announcements from today’s F8 developer conference:

Facebook wants to turn its Messenger app into more than just a messaging app. At its F8 conference in San Francisco Wednesday, the company announced details on its much-rumored plans to integrate Messenger with purchases made on other sites, and to allow third-party developers to build apps that work within it.

Messenger users will soon be able to select from a list of services inside of the app. At launch, most of these apps help users create new content, like singing telegram app Ditty, GIF app Giphy, and voice app FlipLip Voice Changer. There’s also a fun special effects app available from J.J. Abrams and an ESPN app that provides users with sports GIFs. Facebook says 40 apps will be available today or in the days to come.

I was curious about Facebook’s plans for Messenger Platform, and the addition of an API immediately caught my interest. I tweeted:

Messenger Platform could be interesting for app discovery. How is Facebook picking which apps to show though? pic.twitter.com/BsNy6qdz3R

Also interesting that Facebook is basically doing their own “extensions” for Messenger. Imagine this for iMessage?

After reading more about how Messenger Platform works with third-party apps, though, I realized that my tweets from earlier today don’t exactly apply to what Facebook is doing.

From the apps announced in the Messenger Platform Showcase (about 40), I noticed that most of them were dedicated versions specifically made for Messenger. There is, for instance, GIF Keyboard and GIF for Messenger, made by the same developer; there’s Bitmoji for all users and Bitmoji for Messenger. These apps are advertised with a special “for Messenger” suffix on the developers’ websites, they have a different icon with a Messenger badge, and they’re entirely new apps on the App Store. I downloaded the GIF Messenger app without having Messenger installed on my iPhone, and it’s got a blue “Send” button that does…nothing.

I also noticed how some apps – such as Imgur and Action Movie FX – were not dedicated versions built for Messenger, but simple updates to existing App Store apps with the addition of Messenger integration. That piqued my interest and I did some digging on Facebook’s Messenger developer website.

Why are most Messenger Platform apps standalone versions while others (Imgur) are simple updates to their existing app?

As it turns out, there are two ways for developers to integrate with Messenger: basic and optimized. With basic sharing, apps can let people “send images, videos, GIFs and sound clips through Messenger”. With this type of sharing, content shared from apps in Messenger carries an app’s name and icon. 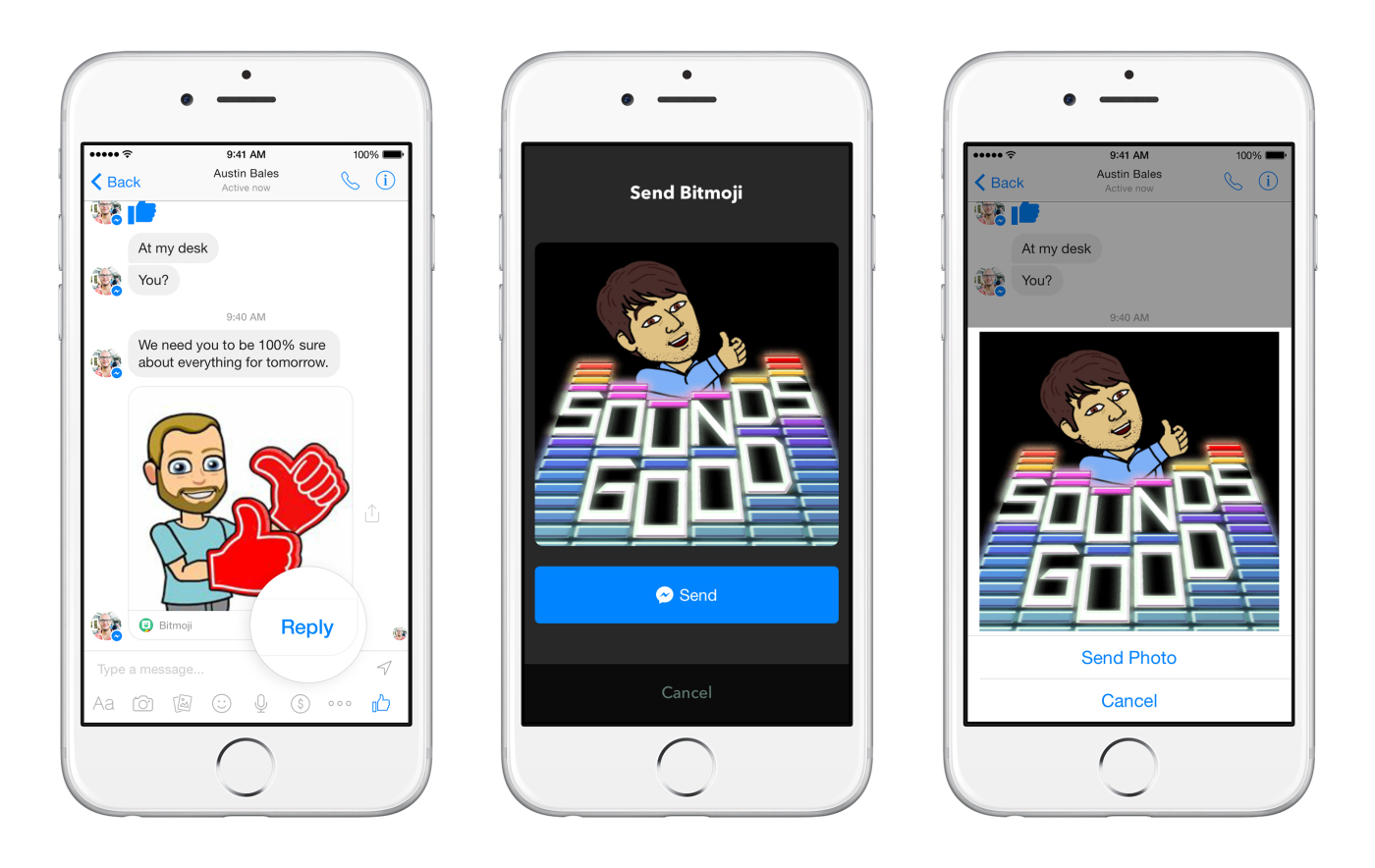 Optimized sharing is what Facebook thinks is the superior solution for developers and users. Once developers apply for optimized sharing and get approved by Facebook, they get access to special Install and Reply buttons for content shared from their apps. These buttons can help drive engagement by letting other Messenger users download an app their friend is using with one tap and reply in a conversation with the same app and flow.

So why have most developers from today’s announcement chosen the make-a-standalone-Messenger-version approach for their apps? The answer is in the custom composer Facebook has built and how they’re recommending Platform apps. 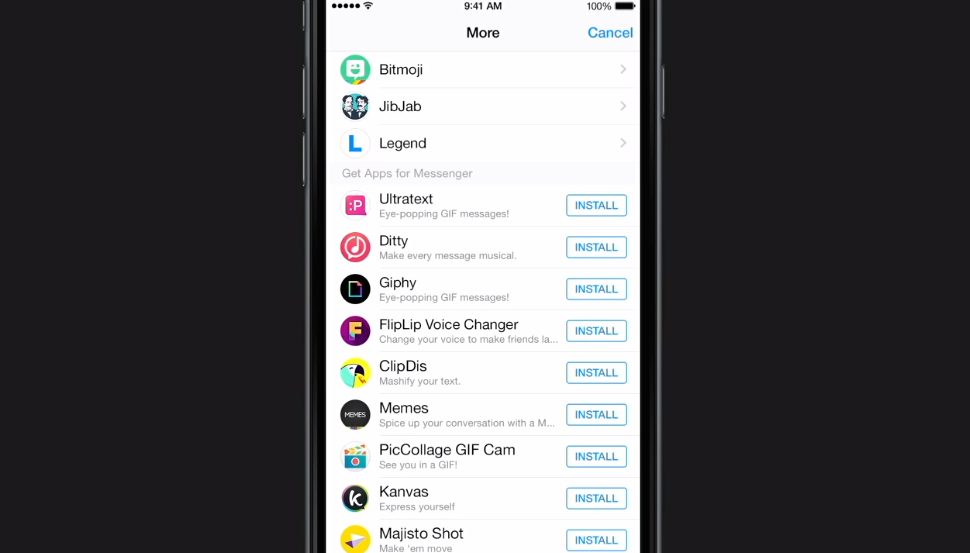 By opening the proprietary Messenger composer (a sheet of apps), users will see installed Messenger Platform apps as well as a list of more “Apps for Messenger”. How are these other apps picked? According to Facebook, you should “think of featured apps as an editorial list of some of the best Messenger integrations”. And to get in that section, Facebook offers some “tips to get featured”. After being approved for optimized sharing, the first recommendation from Facebook is:

Make your app exclusively for Messenger.

There’s also a branding factor at play. The Messenger badge that Facebook is providing with a downloadable Photoshop file is only available if:

Messenger is the exclusive means of sharing content from your app

On the developer’s side, Facebook is even replicating the traditional App Review model with their own App Review for apps that want to use optimized sharing. Interestingly, developers can submit apps that are already available on the App Store (and therefore initially limited to basic sharing) or upload a Simulator build file for a pre-release app.

I’ve been going through Facebook’s guidelines and developer portal, and it seems to me that they’re building Messenger Platform as a locked-in layer on top of the App Store itself. Facebook controls the deep-linking between apps, sharing mechanisms, branding, app review, and editorial curation for a subset of apps built for Messenger, most of them downloaded from the App Store but exclusive to Messenger. They’re using the App Store as a dumb delivery pipe, with the core experience confined in Messenger and apps optimized for it.

How much of Messenger’s app discovery will happen in Apple’s App Store app, and how much will instead take place inside Messenger with App Store sheets that are contextual and never force users to leave Messenger?

I don’t know if Facebook’s experiment will succeed, but it is interesting to observe how this massively popular company with some of the most downloaded apps on the App Store is now using Apple’s infrastructure to serve their own ecosystem with third-party developers. It’s a walled garden inside the walled garden – not a new approach, but with a high visibility in western markets due to Facebook’s established name.

Note also how Facebook isn’t leveraging native iOS 8 extensibility features to integrate its platform with third-party apps. While Facebook could have promoted iOS 8 extensions and keyboards that work well with Messenger (like Apple does for iOS with curated App Store sections), they chose to go with a locked-in approach powered by a proprietary SDK that hinges on exclusivity and native integrations. This may as well be ultimately beneficial to Facebook and developers, but it doesn’t seem like a straightforward experience for the average iOS user.

By eschewing iOS 8 extensions, Facebook has built a system that uses deep-linking (the company isn’t new to that) to make users jump between apps to attach media to Messenger. This is a deeply different experience than what Apple wanted to promote with iOS 8, and it’s both disconcerting and unsurprising to see Facebook using their own solution instead of the open approach granted by iOS 8 extensions. Considering how popular Messenger is across iOS users, I wonder if this custom definition of a “share sheet” will alter perceptions in how communication between apps works on iOS.

I’m not a fan of how Facebook decided to extend Messenger and I think that maintaining standalone apps could be problematic for developers and confusing for iOS users, but I’m curious to see how this plays out.