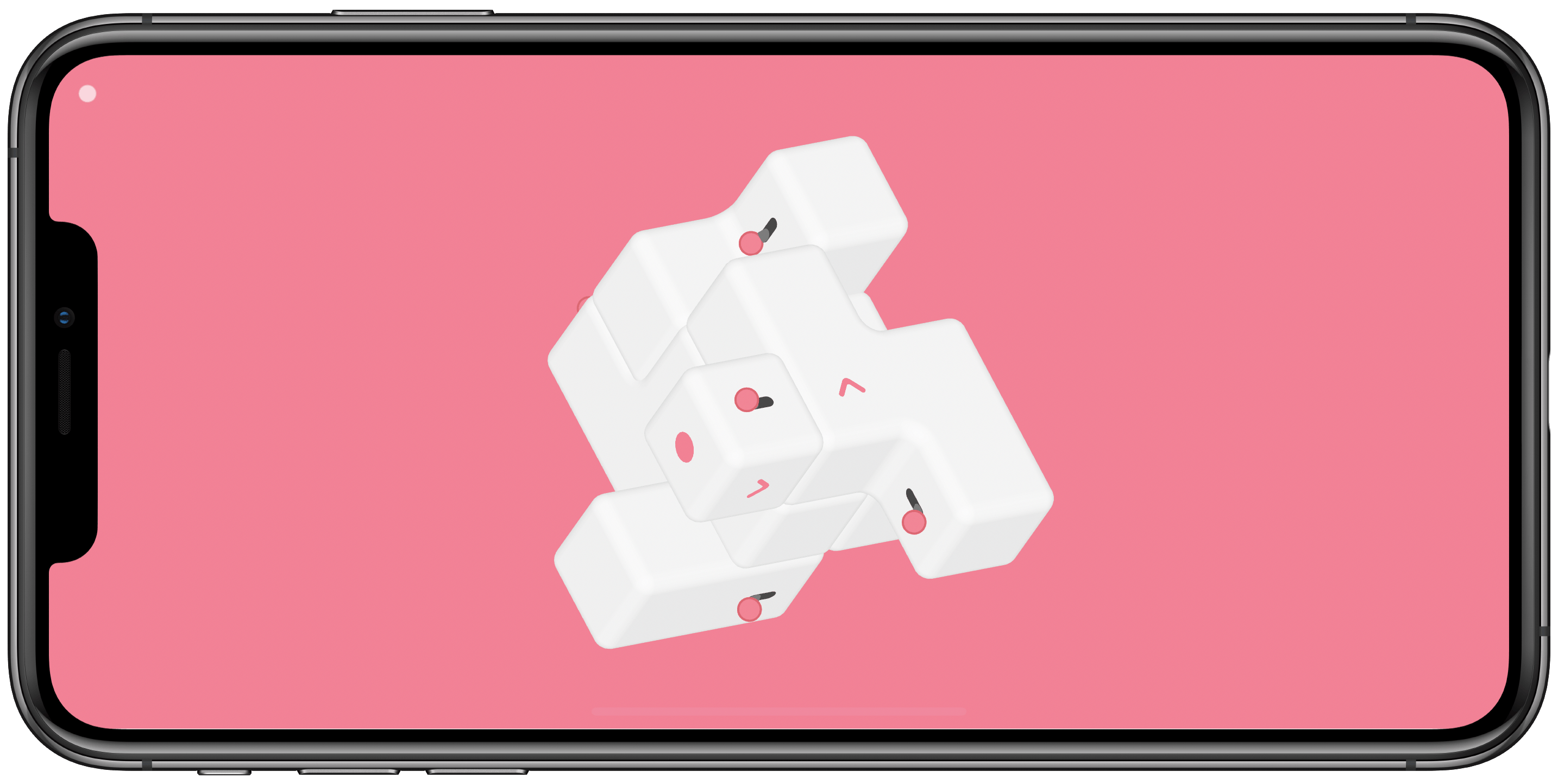 NABOKI, a brand new puzzle game by Maciej Targoni, is a masterpiece of mobile game design. Targoni is the developer of klocki, which I previously reviewed, and several other games that feature a similar minimalist aesthetic that I love.

I started NABOKI for the first time on a recent early-morning flight to California. I couldn’t have picked a better game to make my uncomfortable surroundings melt into the background.

The game has no tutorial and virtually no UI. Instead, NABOKI relies on exploration and the player’s curiosity to propel it forward. Coupled with a soothing nature-inspired soundtrack, NABOKI creates a calming environment of thoughtful concentration that’s a great way to relax.

NABOKI opens with a single white cube with rounded edges and a red arrow-like character on one side. Swiping on the screen spins the cube in three dimensions. Tapping on the cube provided immediate audio feedback, playing one tone when I tapped a blank side of the cube and another when I tapped the side with the arrow, causing the cube to launch itself offscreen.

The early levels of the game introduce the basic concept of tapping the arrow side of cubes to clear them from the screen and rotating the puzzle to consider your options from all angles, as you would a Rubik’s cube. As the puzzles become more complex, featuring blocks of several contiguous cubes, you need to clear pieces in a particular order to clear a path for others, and often to expose the arrows you need to reach before they can be cleared.

After several more levels, NABOKI begins to introduce different behaviors to cubes. There are circles that rotate cubes, switches that shift cubes and blocks of cubes, unclearable blocks, and blocks with patterns that have to be matched to clear them, for instance. Each puzzle builds on the new types of blocks introduced, combining them in clever ways that amp up the difficulty gradually in a way that isn’t frustrating.

Each type of cube also provides different audio feedback, which I enjoy, but I’d like to see haptic feedback added to interactions. NABOKI is the kind of game that I’m far more likely to play on my iPhone, and I think haptic feedback would draw players into the game’s world even more quickly and deeply.

NABOKI should be played with headphones because the soundtrack is a fantastic synthesis of instrumentation and sounds from nature. The soundtrack reminds me a little of the Brain.fm music. It’s a wonderful complement to a puzzle game like NABOKI, that creates a relaxed, contemplative environment in which it’s easy to lose yourself.

The single dot in the top-left corner reveals navigation buttons to replay solved puzzles and a button to turn the soundtrack on and off. There’s no scoring, leaderboards, or other competitive aspect of NABOKI. It’s just you against the puzzles.

Crammed into a narrow seat with a tray that was too small to use my iPad Pro, and with no WiFi, NABOKI was the perfect way to pass a big chunk of my weekend flight. A few levels are also a great way to unwind after a long day. I highly recommend NABOKI to anyone who’s a fan of puzzle games.

NABOKI is available on the App Store for $0.99. 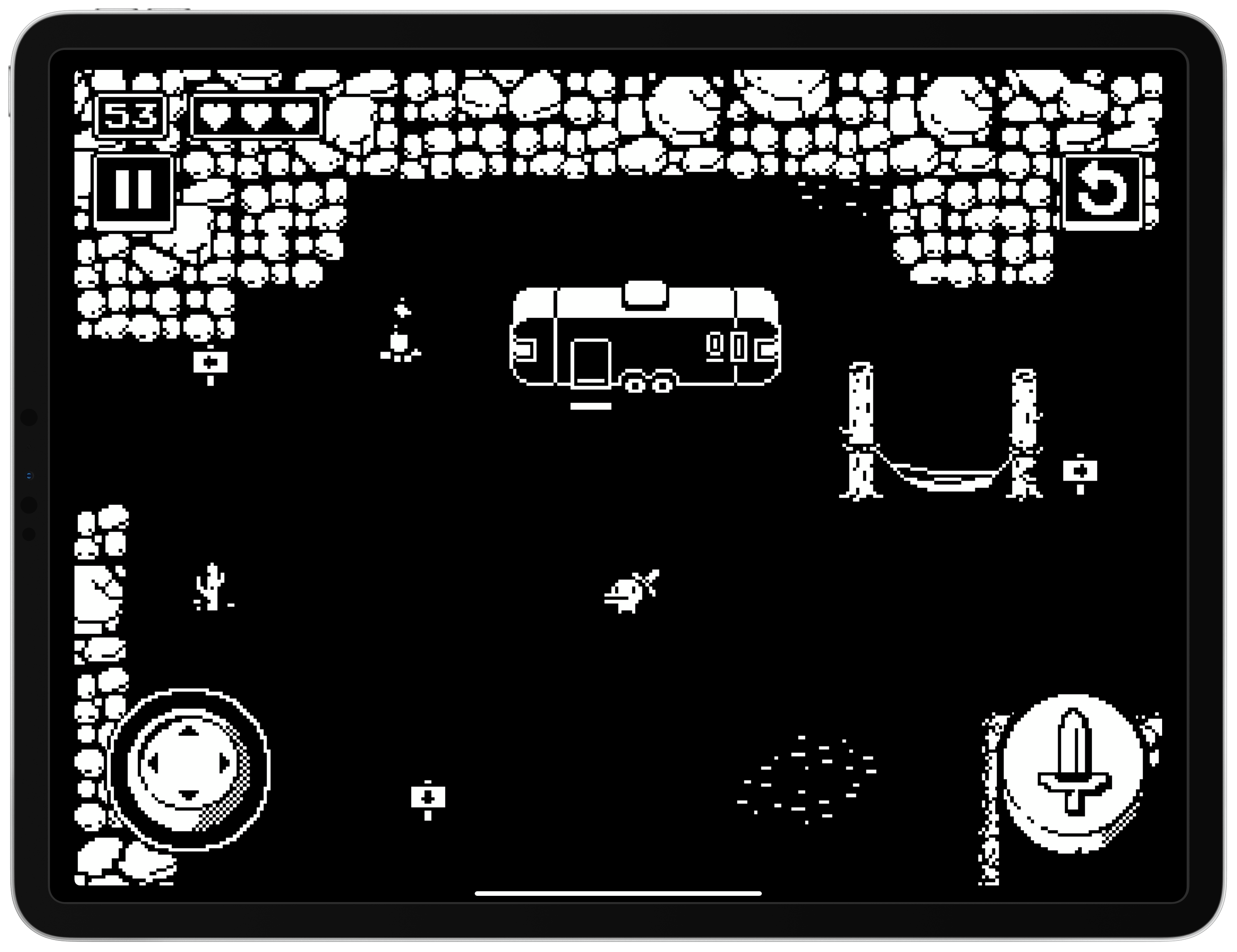 Minit is a new-to-iOS indie adventure game by Jan Willem Nijman, the co-founder of Vlambeer, Kitty Calis, Jukio Kallio, and Dominik Johann. The game, which was brought to iOS a little over one week ago by Devolver Digital, first debuted in April 2018 and is now available on all major consoles, PCs, and mobile platforms. It’s a fantastic game that benefits from the high-resolution screens and excellent sound available on iOS devices but also suffers a little from onscreen joystick controls. That issue can be remedied with an MFi controller, but even playing with the onscreen controls, Minit has quickly become one of my favorite iOS games of 2019.

Minit’s hook is that the hero you control only has a minute to live, a mechanic that’s perfect for a mobile game. As you race around the game’s map, solving puzzles and discovering items, you have to move fast because when the minute is up, you die and have to start over again.

If that sounds frustrating, it really isn’t. You have to start over after you die, but not entirely from the beginning. The ticking clock certainly makes Minit challenging, but it cleverly avoids becoming frustrating by letting your character retain items, powers, and locations even after you die. For example, one of the first items you discover in the game is a cursed sword that is central to the game’s story. When you inevitably die and respawn to continue exploring, you don’t need to grab the sword again because it will already be at your side. The same holds true of powers like pushing objects and locations that become your new home, which avoids the monotony of having to restart the game from the same point over and over.

Minit strikes a careful balance with its core mechanic, allowing just enough progress to be made each time you play to keep you coming back for more. It also helps that no matter where I’ve been on the game’s map, I’ve always felt that I had multiple options each time I restarted. That’s an essential element of avoiding frustration because even when I’ve gotten stuck on a particular quest, I’ve had the option to set out in a different direction and make progress elsewhere.

The game’s art and sound design are top-notch too. The artwork is entirely black and white with chunky pixel characters and environments that convey a sense of whimsy and fun. Coupled with an excellent soundtrack and sound effects, Minit imbues its world with a personality that brings its simple environment to life in a way that transcends any one aspect of the game.

Minit’s controls are just as simple as its artwork. There’s a virtual joystick in the lower left corner of the screen for moving your character and an attack button in the opposite corner. The gameplay is simple enough that the onscreen joystick works reasonably well, but it’s still not as good as a controller with a dedicated thumbstick, especially when lining up your character to attack an enemy. Relatively few iOS gamers have MFi controllers now, but iOS 13 should give games like Minit a boost in the fall when the OS adds support for Bluetooth-based PS4 and Xbox controllers that far more people already own.

Even relying on the onscreen controls though, I’ve had a blast playing Minit. It took the game with me on a short 4th of July road trip, and it was the perfect companion for the long drive and when I had some time to myself in the evenings. Minit treads some of the same ground as similar retro-style adventure games I’ve played before, but the combination of the timer mechanic and unique black-and-white world make it stand head and shoulders above similar games.