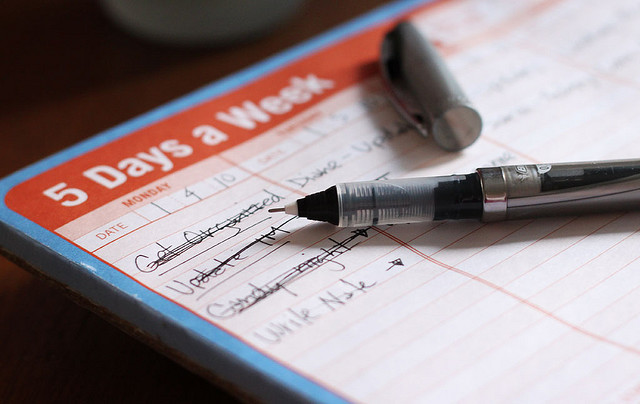 KIMS, unlike KISS (Keep it simple, Stupid!), is removing the notion that we have to toss out our complicated, but memorable systems in favor of simple workflows. I think throwing away what works is the wrong way to go about changing your workflow or lifestyle for the better.

In looking for a simpler way to do something you’ll be presented with tools, pitched ideas, and told that your quality of life will be better if you take this system you have now and simplify it. I think the big problem is that people tend to confuse the words simple and minimalism. To say I should simplify my workflow is to say I should throw out my system because it’s inefficient. That might be true if I was to compare how productive I am to how productive you are. However, our jobs are likely different and even if they were the same, it’s like comparing how well I run to a guy who’s been running in marathons for the last twenty years. You can only accurately measure and reference yourself!

Where I make my case is that you shouldn’t toss a memorable system for the sake of minimalism. Text files for example are extremely minimal, but not many people want to go commando and start setting up areas of focus in Dropbox, when tags and journals in Evernote are much easier to manage for lots of people. You’re told you should do this thing because you’ll ultimately be more productive or you’ll remove a point of stress and clutter in your life, but I have a feeling that the transition and “attempt” (because you’ll never really stick with this minimal system) is going to be a point of stress itself.

We tend to look at problems with broad solutions. Right now, you have this memorable process that you trust, but it actually might be pretty clunky. That’s okay, because there’s something called “streamlining”. It’s not the same thing as simplifying. The problem in simplifying is that it infers that you have to make a big change to one of the variables in your equation. Streamlining infers that you can take the system you already have and improve upon it, which may ultimately lead to some form of simplification. Yes, I’m saying that jumping right into a new habit is a bad idea when you can make small changes that add up over time.

The reason you Google’d productivity hacks for an hour is due to something about your workflow that bugs you. The system mostly works, you’re comfortable with it, but there’s bottlenecks or repetitive things you do that are a drag. The thing that we don’t want to do is say that because something needs tweaking, that you should ditch the whole system for what someone else promises is better. I guarantee that approach will only lead to frustration until it becomes habit, and until then you’re going to deal with lots of lost productivity (which may not be an affordable option depending on your volume of work) while you adopt the system. Even then, if the system doesn’t make you happy or comfortable, it’s ultimately not a good change.

Being comfortable and keeping your workflow memorable is everything.

You’ve surely taken a look at OmniFocus before right? There’s always tons of hype around it because the people who use it are incredibly passionate about it. Interested, you purchase the suite of programs and jump into it. But it’s like jumping headfirst into concrete! You don’t stick with it. Unlike your memorable system of sticky notes strewn across your cubicle walls, OmniFocus is a huge leap of faith. Learning it takes time, you’re already accustomed to this previous system of physically writing things down, and there’s no memorable motion of actually putting a sticky note (which is an abstraction for a reminder) in some physical place. There was no preparedness for that change. There was only ever a whim and promise.

OmniFocus (or maybe it’s Things or The Hit List) doesn’t work because it isn’t memorable. You’re not accustomed to working in the way it wants you to work. See, the problem is that you took a mallet when you only needed the right kind of hammer. Instead of accidentally smashing your thumbnail, you’ve gone and smacked your whole hand! Precision precision….

You’re comfortable with sticky notes and it’s a memorable system. At some level, you start to realize that sticky notes are kind of a pain in the butt. There’s limited space, you collect a lot of them, and there’s really no good system of organization. You keep using this system, however, because you know that you like getting things out of your brain and you realize you’re pretty fast with them. You want to seek a better alternative that keeps things as memorable without disrupting your current way of working. This is the first step towards solving those bugs you want to solve.

In the workflow you have now, you’re likely to come across little things that bug you. The goal to simplifying isn’t to apply a simplified practice. The “minimalist workflows” you read about online shouldn’t be applied as is. These people have achieved the goal of ironing out all the bugs and have come to a broad conclusion of how they ended up working after long periods of reflection, tweaking, and time. Habits don’t change overnight. What you should start getting is that productivity is reflected in small doses of change.

Looking at the sticky notes, we can begin to solve some of the bugs we noted but remain within the means of what’s already memorable. We move from sticky notes to index cards (maybe it’s a legal notepad instead). There’s more space, there are lines so I can have neatly written sentences, and I can title them to solve the whole management issue. After a while you realize that having index cards tacked on your walls isn’t working out between promotions and heavier workloads, so now we want to solve that specific problem.

You buy a file tray from Staples. Your index cards are now organized into little piles kind of like OmniFocus. You have an inbox, different categories for work management, and an outbox for delegation. You’re the queen of the office! How easy is it to walk by Sheela’s desk and just hand her the thing she needs to do tomorrow from the outbox rather than searching for it on one of your three cubicle walls? Your productivity boomed by just making some small changes. You never really altered your system, but you simply changed your toolset for similar, but better tools. Sticky notes became index cards, and the cubicle walls became the file tray.

A few months later you get a big promotion. Supervisor. Suddenly your stack of index cards gets really big. Cutting down on the clutter is now a priority, so you make a small change and move to a traditional to-do list format. Now you can prioritize tasks on paper, keep topics together, and it still works with that desk tray you purchase.

These changes add up. You’ll read Lifehacker and learn of Gina Trapani’s Todo.txt workflow that might be pretty similar to that paper based to-do format you have now. Being on a budget, you decide to forgo paper for a simple text file. Eventually, it might lead back to OmniFocus in due time. Through this process, you were always comfortable with just streamlining the workflow you were comfortable with. You never had to dramatically change your habits or learn some new system. Friction was kept at a minimum, and you never had to swing in reverse.

I’m not saying you should follow the exact steps I listed above. It’s merely an example of how a workflow change might happen over time. You shouldn’t be thinking about mimicking someone else’s workflow down to a T, but rather looking at the bugs in your current workflow and ironing them out. Keeping your workflow memorable will result in much greater yields than dumping a word processor for a text editor with the promise of making you more productive. Baby steps are needed, especially if you aren’t familiar with the tools recommended.

Just because a system is immediately simple or minimal doesn’t make it immediately better, because the system you use now is so familiar that this new promise ultimately becomes disruptive.

Keeping your system memorable is really important. Not everyone has the time commitment to jump straight into GTD and read David Allen’s book, but what I think that practice encompasses is being mindful of what you’re doing and solving that in non-disruptive ways. Instead of telling you GTD is how you should do things, I’m saying you can get to GTD or the form of it that works best for you (just like nutritional needs, our workflows are going to be different) by just fixing what “bugs you”. Don’t be aggressive about it and don’t bring a sledgehammer. Improve upon ways that make you excited to tell your neighbors how awesome you are.

Even if that small change involves just rearranging sticky notes into a different system of organization, it’s at least one small positive change. You will be happier. The next time someone says that your workflow isn’t simple enough, know that they might have some good tips, but don’t see their solution as the one you should adopt. That system was tailored for them. Keep your system memorable, seek advice, learn from other’s mistakes and apply it to you, but don’t throw away what already works for the promise of something better. Because even they? They’re still tweaking too.