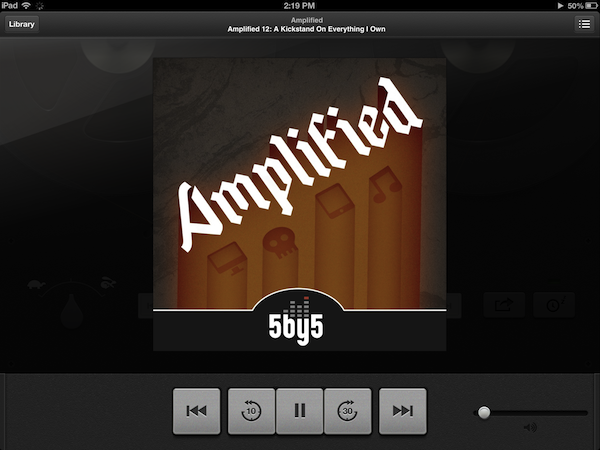 Apple’s Podcasts app is an acknowledgment that podcasts make up a substantial part of entertainment on iOS devices — more people than ever are subscribing to, learning from, and taking part in conversations around the topics that interest them. Long neglected with basic playback controls and mediocre syncing in the Music app, Podcasts is now its own standalone application. You couldn’t miss the news either — the Music app notifies you of this change on your iPhone or iPad when you open it.

With large and indie media networks recording weekly, if not daily, audio and video content, listeners who want “radio on their own time” can subscribe to and take part in discussions that they otherwise can’t be a part of through traditional radio or broadcast TV (i.e. time slots). Podcasts, while not a new concept, give listeners the opportunity to stream and download often short, consumable chunks of content that that’s more accessible than written text — it’s the way to catch up on news if you’re sitting in rush hour traffic, taking the dog for a walk, or doing the dishes.

Over the years, consuming podcasts becomes an incredibly intimate experience. Because people choose to listen on their own time, and often when they’re doing specific activities where they otherwise can’t read or listen to an available live stream, people look for specific features tailored to provide a custom listening experience. Being able to increase the playback rate of podcasts, set sleep timers, create playlists, add bookmarks, and stream podcasts over wireless networks has become increasingly important. Features, more-so than fancy user interfaces, are often preferred by users who regularly listen to podcasts.

Apple’s Podcasts application on iOS is their new central hub for finding, subscribing to, and listening to podcasts on your own terms. In consideration of how Apple’s podcast directory (their Catalogue) and podcatcher intermingle, it’s a pretty typical Apple experience. And in places where I thought Apple would fall short, I’m actually impressed at the amount of stuff they’ve added to their once featureless podcatcher. While Apple has certainly gone above and beyond my expectations in what they’ve provided, I think there can be some room for improvement. 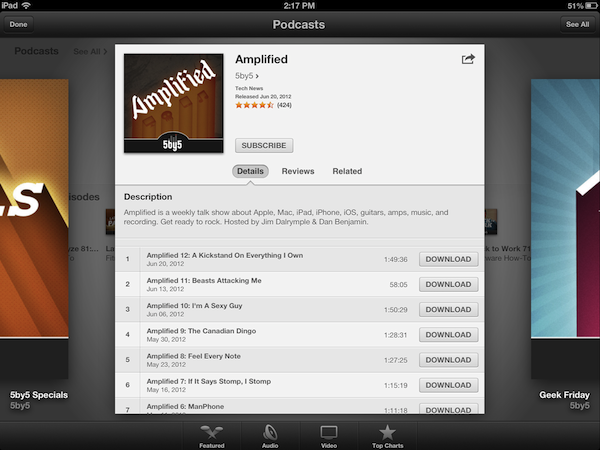 Honestly, I’d say Podcasts surprisingly does a good job in paring up with the big boys like Instacast, Downcast, and Pocket Casts. Apple added features I didn’t think they would consider, such as a sleep timer with an option to sleep when the current episode ends; 10 second rewind and 30 second forward buttons; social sharing with Twitter and probably Facebook down the road; sorting by newest or oldest episodes; and streaming vs. downloading indicate that they don’t just care about their casual audience. Gone is the idea of downloading a podcast through the iTunes Store, selecting an episode, and hitting play: you can subscribe to shows and stream them in Apple’s distinctive user interface. 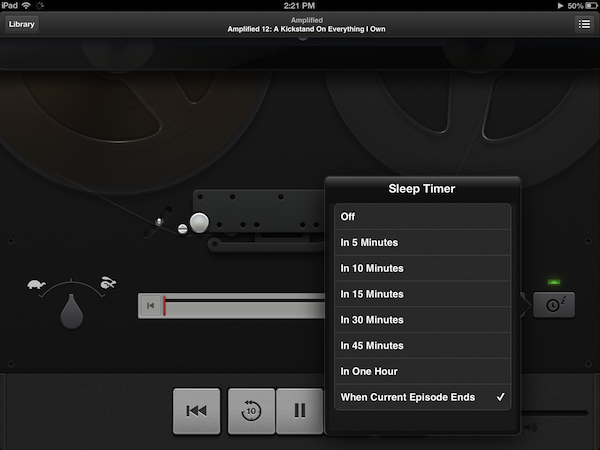 Much like how Apple completely refreshed the Music app on the iPad, Apple’s Podcasts brings what I’d have to say is an incredibly clever user interface. While the Catalogue is par for the course as far as browsing and subscribing to podcasts go, the really impressive stuff is happening in the Library. Top Stations, which is more or less intended to be a way for users new to Podcasts to find popular content (it’s maybe even a, “I’m bored — what’s new?” directory), lets you scrub through popular shows as if you were tuning an old AM / FM radio. Podcasts open up to reveal episodes behind artwork much like how albums open up in the Music app, and selecting an episode takes you to a beautiful podcast player that’s really nifty. Sliding up the artwork reveals a playback knob, tape, and a sleep timer light that are all interactive. As the episode plays, the tape will roll between the wheels on either side of the display — it’s a really impressive animation (and it’s interactive if you move the red scrubber). If a podcast includes chapters, it will break them up into sections inside the scrubber instead of showing them in a traditional list.

For casual and even some power podcast listeners, there is a lot to like about the Podcasts app. If you just want to listen to podcasts, then I believe the Podcasts app could be enough to fulfill your needs. Power features are what’s missing: you can’t make playlists, set individual refresh schedules for podcasts, set bookmarks, read links in show notes, or sync subscriptions over iCloud with your other iOS devices. You can get away with some of these omissions, but the lack of syncing between your devices means you’ll have to choose a dedicated iOS device for podcast listening, or you’ll have to use iTunes as the intermediary. Disappointingly, iTunes can only work as the intermediary if you actually download the episodes. I’m sure Apple will address this in future iTunes and Podcasts updates. 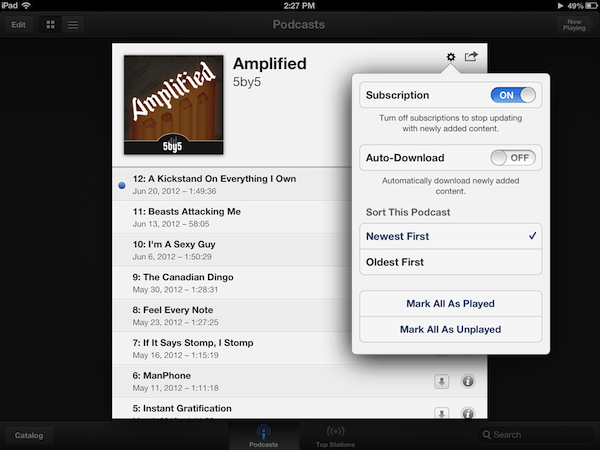 If you’re using another podcatcher that has a good syncing option, I wouldn’t switch to Apple’s app. Even when Apple does update their podcatcher, power users will still find alternatives to be advantageous for the myriad of sorting, subscription options, and niche features they offer. I think pundits and bloggers can argue that Podcasts will sherlock podcatchers in the App Store, but that simply isn’t true when we start to talk about the top selling podcatchers in the App Store. Apple is providing a platform for success and a gateway for new users to discover podcasts, while leaving room for 3rd party developers to fill in the gaps that iOS users want or ask for.

Apple’s Podcasts gives its growing network of “talk radio and online television” the attention it deserves, and in this move, rightfully makes more users aware of a mountain of great content that could otherwise go unnoticed. The app itself is fantastic, removing the friction that users had to deal with in the previous implementation. The Podcasts app itself is really well done — with the exception of not syncing subscriptions between devices through the cloud, it can be an ideal podcatcher for many people. Preparing to be disappointed, I was delightfully surprised, and I suggest that users at least check out the wonderful animations and interface elements peppered throughout the app. It’s an app that should ship with iOS devices — it shouldn’t be a separate download from the App Store. When iOS 6 ships, we’ll see what Apple decides then.

You can download Podcasts for the iPhone and iPad from the App Store.