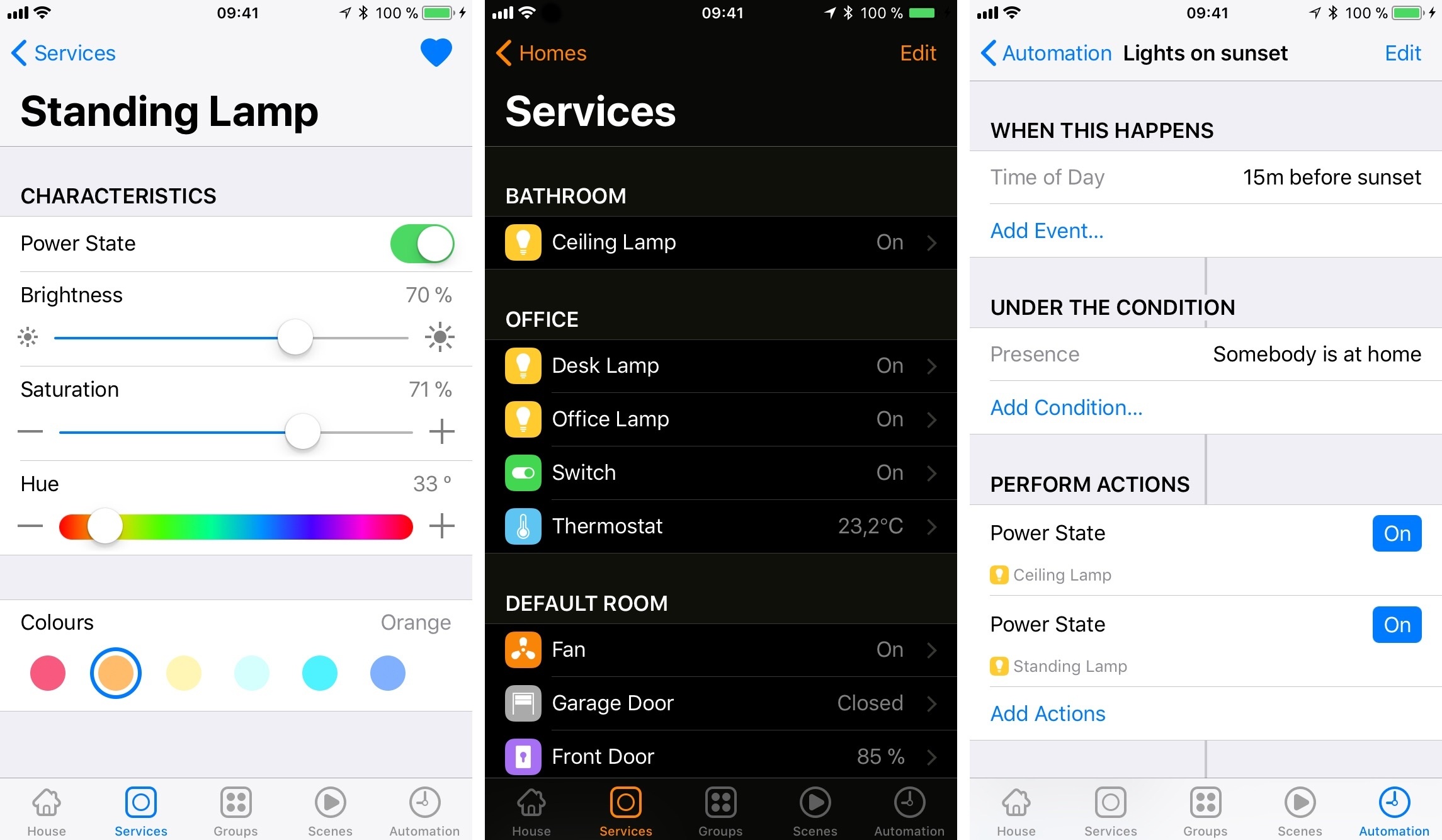 Matthias Hochgatterer’s Home app has received a major update to version 3.0 alongside the release of iOS 11. It includes an updated UI and drag and drop support, but the biggest news with Home’s update is the way it unlocks a world of new automation possibilities thanks to iOS 11’s HomeKit updates.

When setting up HomeKit automations, Home 3.0 now contains several new event options. One of those options is an event trigger currently unavailable in Apple’s own Home app: characteristic value ranges. It taps into precise value measurements tracked by HomeKit accessories – such as the current temperature as read by a smart thermostat – and can use those values as event triggers. For example, your thermostat could trigger a Home action when the house hits a certain indoor temperature. The absence of this feature in iOS’ native Home app is puzzling, but I’m thankful it’s available here.

People presence is another new iOS 11 event trigger, based on the concept of yourself or certain family members being at home or away from home – a crucial concept for home automation systems to grasp. A third new trigger is sunrise or sunset, which allows a more precise automation approach than time of day by basing automation on localized sun state. There’s also the option of choosing a set period of time before or after sunrise or sunset to set off the trigger, such as 15 minutes before.

In addition to these event triggers, Home also includes new conditions available for automation purposes, including time of day, people presence, and weekdays.

Home’s updated interface only contains minor changes, but it’s clearly been optimized for iOS 11. Bold headers match those found in Apple’s stock apps, making Home fit in well on the platform. A new dark theme is the most interesting UI update. Rather than creating a native dark mode as developers traditionally do, Hochgatterer opted to take advantage of iOS 11’s new Smart Invert Colors feature and brand it as a dark theme. Smart Invert Colors is iOS 11’s new and improved accessibility feature previously known simply as Invert Colors. Prior versions of this feature would invert the colors of everything onscreen, but Smart Invert Colors identifies UI elements that shouldn’t have their colors inverted, thus only changing things like backgrounds, buttons, and so on. The catch is that while Apple has optimized several of its apps for Smart Invert Colors, third-party developers have to take action in order for their apps to do the same. That’s what’s happened here: Home tells the system which UI elements to invert, and which not to – effectively, creating a dark theme for the app with minimal effort. It will be interesting to see if other developers follow this approach for providing users with a dark option.

iOS 11’s new drag and drop framework has been implemented throughout Home for expected tasks like reordering accessories, scenes, and triggers. It provides an intuitive, streamlined approach to setting the app up to your exact preferences.

Home 3.0 is a clean, easy to operate smart home command center, taking the best new functionality of HomeKit in iOS 11 and presenting it in an attractive package. If you’re looking for an alternative to Apple’s Home app, look no further.

For the remainder of September, Home is on sale for $10, down from its normal price of $15. You can find it on the App Store.