Over the past few years Apple has continued to improve the speakers in the iPhone and iPad quite significantly, except for the fact that they continue to be directed out to the side rather than the front. In fairness, this is probably the most practical location for Apple but it has meant that I’ve purposefully cupped my hand around the iPad’s speakers to help redirect the sound on a number of occasions. It is exactly this weakness where a Kickstarter project, the SpeakerSlide, is trying to improve things. It’s a simple plastic (polycarbonate) accessory that redirects the sound out to the front of the device. The SpeakerSlide team were able to ship me 3D-printed evaluation models of the SpeakerSlide for both iPhone and iPad, so I gave the product a test run over the last week.

I first tested the SpeakerSlide with the iPad Air and I can honestly say that the effect it had was instantly noticeable and fairly significant. Sound coming from the iPad actually sounded like it was directed to me, which shouldn’t be surprising, but what was surprising to me was how much more natural that felt. When I started taking the SpeakerSlide on and off to try and hear the difference, the effect was even more noticeable. It almost felt like the sound (without the SpeakerSlide) was muffled because of the direction of the speakers. Because the sound is being directed at you with the SpeakerSlide, it also means you don’t need to have the volume as loud as you would without it, and that shouldn’t be underestimated.

The one downside of the SpeakerSlide from a sound perspective (and note that I am nowhere near an audiophile, or I’d probably just buy some really good headphones), is that when the volume was loud it did seem to get a bit hollow with the SpeakerSlide. It wasn’t a significant effect, but noticeable at the higher volumes – keep in mind that I was using the 3D printed evaluation model; the final polycarbonate version may not have this issue.

A bigger issue I see for the SpeakerSlide is the way it attaches to the iPad or iPhone, which it does so either with a Lightning cable or with its own plastic plug. The way they work is that the SpeakerSlide has a slot for the Lightning cable to pass through, but it is narrow enough to get a good grip on the cable and hold itself into place. That’s actually pretty clever and well designed, but the problem is if you want to use it without the Lightning cable (3rd party cables won’t work because they have different dimensions) – you have to use the SpeakerSlide’s little plug for the Lightning cable, which is effectively just a replica of the end of a normal Lightning cable, but in plastic. I can just imagine how easy it would be to lose that plug, because it is really small. I can also potentially see someone using it, accidentally dropping their iPad and the plug snaps in half, stuck in the Lightning port. Those concerns could potentially be solved by shipping a few replacement plugs with every SpeakerSlide and maybe making the plug out of metal rather than polycarbonate. 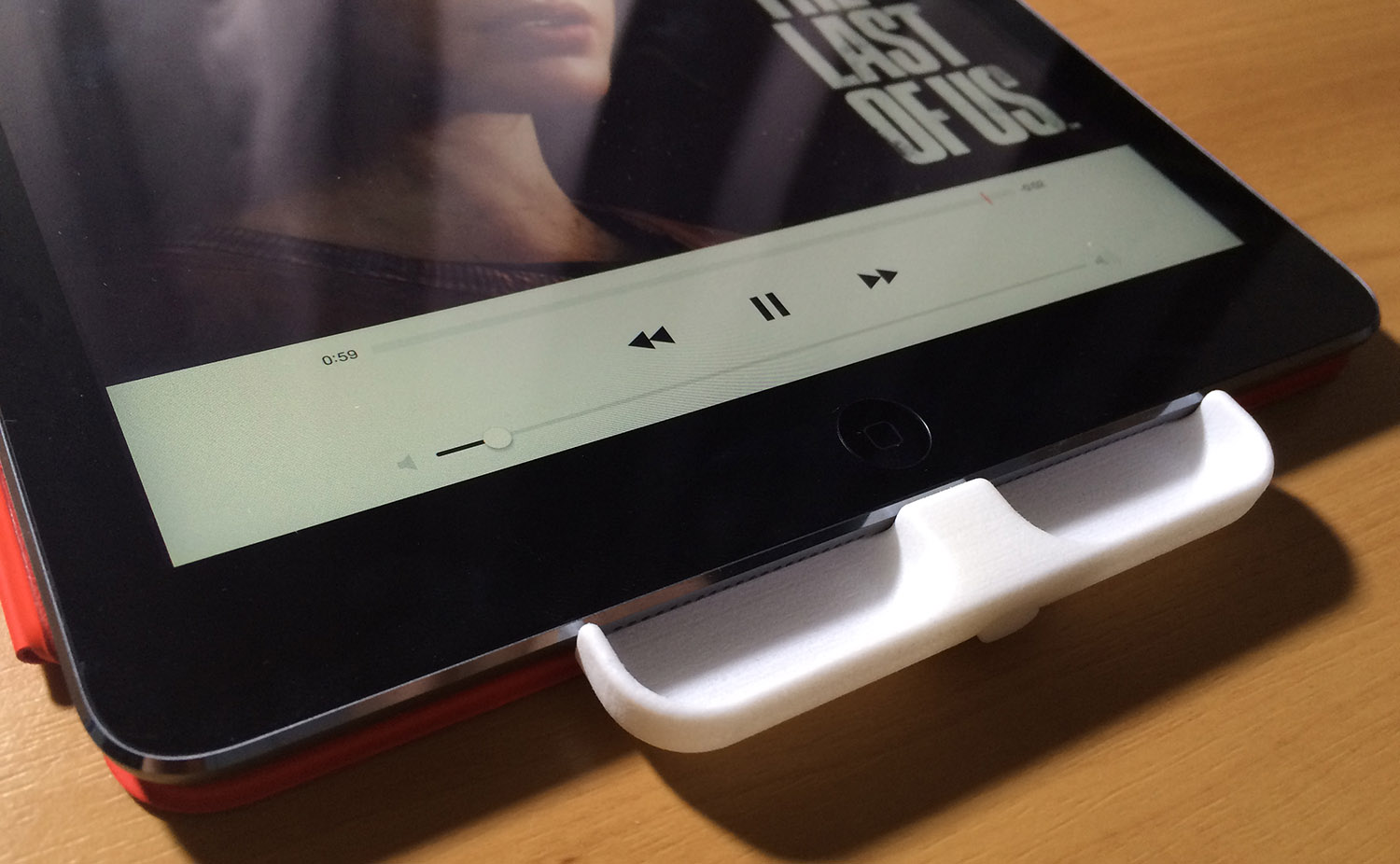 The 3D printed evaluation model of the iPad SpeakerSlide, attached to an iPad Air by the SpeakerSlide’s Lightning port plug.

A quick note on the iPhone SpeakerSlide which I also tested, and truth be told I’m not really a big fan of it. It didn’t seem to improve sound volume or “quality” as much as it did on the iPad. There’s also the practical aspect of how often would you really want to carry the SpeakerSlide around with you and use, not to mention the fact that you probably already hold the iPhone in a way that redirects the sound at least a little bit.

In the end though, I was impressed enough by the iPad SpeakerSlide that I’ve decided to back the project on Kickstarter. There is enough of an improvement in sound volume and “quality” that it is worth the effort to grab the SpeakerSlide and plug it in when you want to watch videos, listen to music or perhaps play a game on the iPad and want a little better sound experience. In particular, FaceTime or Skype calls with a group of people around one iPad is one particular instance where the SpeakerSlide truly shines and where other solutions don’t really cut it (headphones wouldn’t work, external speakers are probably too much hassle, etc).