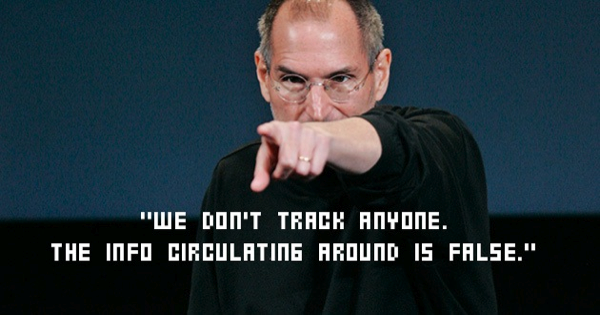 When security researchers Alasdair Allan and Pete Warden revealed a file in the iPhone’s backup history that contained time and location data, the media broke into a frenzy as Apple, Android, and smartphones became a target of scrutiny for privacy. It’s believed that Apple’s location data exists to reduce the time it has to look for cellular towers and GPS data by caching your known location. The data is accurate but not pinpoint accurate, and Apple has taken significant strides to increase battery life by regulating wireless services on the device. Quite simply, this file is simply for reference and is stored locally, used by the phone to preserve battery life and connect to known wireless “hubs” faster depending on your location. The issue, however, is that the file is likely “leftovers,” meaning cache was accidentally saved as a persistent file. This morning, MacRumors reports that one of their readers reached out to Steve Jobs on the issue, and got a response.

Could you please explain the necessity of the passive location-tracking tool embedded in my iPhone? It’s kind of unnerving knowing that my exact location is being recorded at all times. Maybe you could shed some light on this for me before I switch to a Droid. They don’t track me.

A: Oh yes they do. We don’t track anyone. The info circulating around is false.

Sent from my iPhone

Steve Jobs slams Android (claiming Google tracks users while Apple doesn’t), and it’s possible a future update from Apple could fix the issue in question (permanent storage of temporary cache). While Jobs has likely started a firestorm  this week over Android’s integrity (think antennagate all over again), there’s nothing to be worried about here and this issue has been overblown. You can always turn off your iPhone’s GPS services if you feel compelled, but the evidence suggests that Apple has nothing to hide.