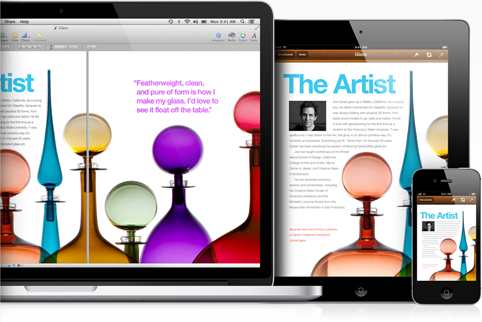 Apple has today updated the Mac versions of iWork (Pages, Keynote, Numbers) to include support for the new display on the Retina MacBook Pro as well as integration of iCloud. Support for iCloud now allows users of the iWork apps to create documents on their iPhone, iPad or Mac and then continue working on them on any of their other devices, no matter where they are. The highlight of it all is that changes are synced across automatically and instantly. iCloud support for the Mac apps has been a long time coming, with the iOS versions updated to include support late last year, but comes today on the release of Mountain Lion which touts iCloud support as one of the key improvements.

Users of the new Retina MacBook Pro and iWork suite will also be happy with today’s update that now natively supports the new display. As Apple says, “everything you create in iWork is stunning on the new MacBook Pro with Retina display”.

For those wanting a complete overhaul of the iWork suite, well today just isn’t that day. Whilst Apple nearly always just calls it “iWork”, there are a few reminders on Apple’s own website, that these are apps that last received a major update in 2009.

You can download or purchase the latest version of iWork from the Mac App Store: Pages, Keynote, Numbers.