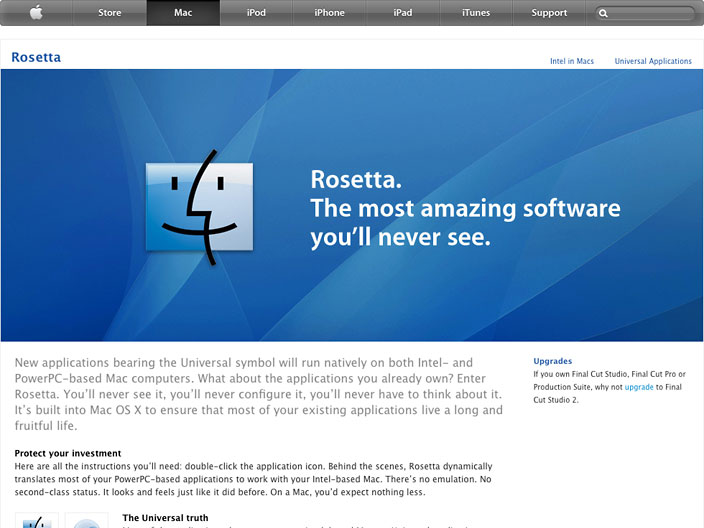 If you’re still running Mac apps that leverage Rosetta, prepare to lose that functionality when you install Lion. A main concern that TidBits recently expressed, is that the loss of Rosetta (which helped switch users from PowerPC to Intel based machines) would eliminate still perhaps frequently used software.

“Now, two major versions of Mac OS X later, it appears that Rosetta is going away. And if it does, it will be accompanied by a number of applications that I use frequently. Quicken 2007. Photoshop CS1. FileMaker Pro 8. Microsoft Word 2004. Among many others.”

Rosetta is a subject that often evades us since it’s optionally installed on Snow Leopard by apps that really need it. If you’ve recently purchased a Mac or only have purchased apps on the Mac App Store, you’ll never have to install Rosetta to use the most up-to-date applications. But for those still utilizing PowerPC compatible applications, it might be required that you simply don’t upgrade to Lion, or install it on a separate partition so you can continue using Snow Leopard’s provided functionality. MacRumors reminds us of this change today via a forum post at Macworld, where a user expressed worry over retaining a soon to be outdated version of Quicken. Macworld responded:

Broadly, you have a couple of options. One is to create a dual-boot Mac – one that can boot from two volumes. One volume contains Lion and another runs an older version of the Mac OS. When you need to spend some quality Rosetta time, you boot into the older OS. And yes, this is a pain.

The other option is to simply not update to Lion. Your Mac will continue to work just as well as it does today. How acceptable this is to you depends on how desperate you are for Lion’s features and iCloud (some of iCloud’s features will require Lion).

The changes in Lion will even affect current universal applications. From Charles Moore of Low End Mac:

There is an interesting element to Lion, such as “autosave”, which will only work on new programs coded for Lion, but won’t work on earlier Intel/Universal coded programs. It indicates to me that Apple will eventually run only post-Lion programs on their computers.

Apple doesn’t hesitate to cut old features. With the system requirements for Lion requiring the latest hardware, those who have older Macs will not only lose out on software they use, but will have to upgrade to a new machine as well. In our audience, how many of you still run Rosetta-based apps? Leave a comment below letting us know what the Lion upgrade means to you.