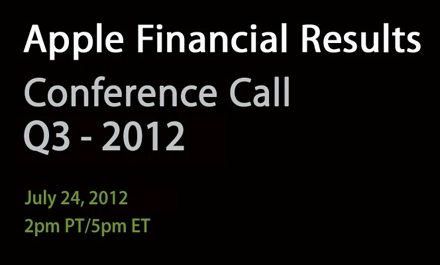 Looking ahead to the fourth fiscal quarter, we expect revenue of about $34 billion and diluted earnings per share of about $7.65.

Apple will provide a live audio feed of its Q3 2012 conference call at 2:00 PM PST, and we’ll update this story with conference highlights. The full press release is embedded after the break.

Oppenheimer: Concerning iPad and iPhone, “iPad and iPhone sales continue to be affected by rumors and speculation about new products.”

Q: What is sequential impact on margins and revenue for Fall quarter? How much would you get back in December quarter? Oppenheimer: “Fall transition is driving most decline. It’s not something we’re going to talk about in detail today. We could not be more confident in our product pipeline.”

Q: Any quantification on how iPhone rumors have hurt sales? Tim: “I think there’s a lot of speculation. It’s difficult to sort out… But, I’m fairly convinced from what I’ve seen that’s there is incredible anticipation for future products [based on our previous products]. … I think it’s a reasonable amount. We put our current thinking in guidance that Peter provided you.”

Q: Can you talk about the Mac? Any thoughts how Macs are doing and cannibalization by iPad? Tim: “Primary factor for lower growth in Mac is timing of portable announcement within last quarter. We announced an entirely new portable lineup which has been well received with only three weeks left in the quarter. A year ago we sold our entire lineup in the Q3 period. Prior to our developer’s conference, we were running below the previous year… after the developer’s conference, new Macs drove sales above the year over year. MacBook Pro with Retina display has been incredibly received — we ended the quarter with a backlog.”

Q: What are conversations like with carriers… pricing and subsidies. Tim: *laughs* “Let me avoid talking about the product transition… you’re very smart to ask about that. [Our focus] is on the customer experience. The most important thing for Apple, by far, is to continue making the best products in the world. We are maniacally focused on it. The subsidy they pay is relatively small to what they collect in a 24-month contract period. Churn rates are much less. You see carriers now focusing on shared data plans… Customers more likely to have an iPad. We think we have the most the most efficient smartphone with an app rich ecosystem. We think carriers will be motivated to provide for their customers.”

Q: Peter - above expectations relative to guidance for iPhone. Above expectations for iPod. Thrilled with iPad. Illustrate where you were disappointed relative to original guidance. Oppenheimer: “We are happy — sales exceeded guidance, and iPad set a new record at 17 million units. 35 billion in revenue grew by 6 billion year-over-year. Economy in Europe is not doing well. We also saw some economic impact in natural resource based economies like Australia, Brazil, and Canada. Rumors and speculation about a new iPhone - we think this has caused pause in customers purchasing. Timing in Ivy Bridge impacted sales in April and May. We did not get benefit of launching new iPad in China or new portables — we’re perusing regulatory approval. And dollar grew stronger than international currencies.”

Q: Tim - smartphone growth in emerging markets. Some data I’ve seen suggests that 70% of smarts phones, like in China in other places, are under $300. Does that limit your ability to gain share in a marketplaces where you can’t match those price points. Tim: “Your 70% doesn’t match what I’ve seen, but let me try to answer your questions. We’re focused on China because we see it as an opportunity. We’re pleased to grow iPhone sales over 100% last quarter. We firmly believe that people in emerging markets want great products like that in developed markets.”

Q: Apple TV number for quater? Thoughts about that going forward? Tim: “1.3 million last quarter, and it brings our fiscal year to 4 million units… which is pretty incredible. It’s still at a level where we would call it a hobby. We continue to pull strings to see where it takes us. There’s a lot of us who believe in Apple TV. We do it because we think it will lead us somewhere. We’ll see… I think this 4 million is not a small number. Small to iPhones and iPads perhaps, and there’s a lot of believers in it.”

Q: You talk about hobbies… PassBook lays out the future of a wallet. Can you comment on that? Tim: “Many of us found boarding passes and tickets that were scattered over iPhones in different apps, and so PassBook does an incredible job of pulling those in one place. So, it’s a important feature of iOS 6. I wouldn’t want to speculate about where it might take us.”

Q: Apple not doing well in India? Tim: “I love India. We believe, in the interim, we have more opportunities in other countries.”

Q: Distribution? Tim: “Short of MacBook Pro with Retina display, we believe it will be in supply and demand in August. We don’t talk about new products or parts that are in them, there is a limit, other than anything we know about we’ve included in guidance. If we were short on something, you can be sure we’re spinning our wheels to mitigate that.”

Q: iPad with Retina display inventory? Tim: “In Q3 we feel we ended in balance.”

Q: How do you think about opportunities to address lower price points with existing products without compromising core features that make products great? Tim: “Our north star is to maniacally focus on making the best products. Economic turmoil may push those products aside…(But our focus is on making the best products when we can.) We’ve seen year and year again that we distance ourselves further from people who don’t innovate. That’s what we’re focused on. When we can hit more aggressive price points, we’re also going to do that. You’ve seen us do that with the $399 iPad just a few months ago and the iPhone 3GS. So, our north star is making the best products in the world. That’s why we breath. That’s why we live. We’re not changing that.”

Apple’s Board of Directors has declared a cash dividend of $2.65 per share of the Company’s common stock. The dividend is payable on August 16, 2012, to stockholders of record as of the close of business on August 13, 2012.

“We’re thrilled with record sales of 17 million iPads in the June quarter,” said Tim Cook, Apple’s CEO. “We’ve also just updated the entire MacBook line, will release Mountain Lion tomorrow and will be launching iOS 6 this Fall. We are also really looking forward to the amazing new products we’ve got in the pipeline.”

“We’re continuing to invest in the growth of our business and are pleased to be declaring a dividend of $2.65 per share today,” said Peter Oppenheimer, Apple’s CFO. “Looking ahead to the fourth fiscal quarter, we expect revenue of about $34 billion and diluted earnings per share of about $7.65.”

Apple will provide live streaming of its Q3 2012 financial results conference call beginning at 2:00 p.m. PDT on July 24, 2012 at www.apple.com/quicktime/qtv/earningsq312. This webcast will also be available for replay for approximately two weeks thereafter.

This press release contains forward-looking statements including without limitation those about the Company’s estimated revenue and diluted earnings per share. These statements involve risks and uncertainties, and actual results may differ. Risks and uncertainties include without limitation the effect of competitive and economic factors, and the Company’s reaction to those factors, on consumer and business buying decisions with respect to the Company’s products; continued competitive pressures in the marketplace; the ability of the Company to deliver to the marketplace and stimulate customer demand for new programs, products, and technological innovations on a timely basis; the effect that product introductions and transitions, changes in product pricing or mix, and/or increases in component costs could have on the Company’s gross margin; the inventory risk associated with the Company’s need to order or commit to order product components in advance of customer orders; the continued availability on acceptable terms, or at all, of certain components and services essential to the Company’s business currently obtained by the Company from sole or limited sources; the effect that the Company’s dependency on manufacturing and logistics services provided by third parties may have on the quality, quantity or cost of products manufactured or services rendered; risks associated with the Company’s international operations; the Company’s reliance on third-party intellectual property and digital content; the potential impact of a finding that the Company has infringed on the intellectual property rights of others; the Company’s dependency on the performance of distributors, carriers and other resellers of the Company’s products; the effect that product and service quality problems could have on the Company’s sales and operating profits; the continued service and availability of key executives and employees; war, terrorism, public health issues, natural disasters, and other circumstances that could disrupt supply, delivery, or demand of products; and unfavorable results of other legal proceedings. More information on potential factors that could affect the Company’s financial results is included from time to time in the “Risk Factors” and “Management’s Discussion and Analysis of Financial Condition and Results of Operations” sections of the Company’s public reports filed with the SEC, including the Company’s Form 10-K for the fiscal year ended September 24, 2011, its Forms 10-Q for the fiscal quarters ended December 31, 2011 and March 31, 2012, and its Form 10-Q for the quarter ended June 30, 2012 to be filed with the SEC. The Company assumes no obligation to update any forward-looking statements or information, which speak as of their respective dates.

© 2012 Apple Inc. All rights reserved. Apple, the Apple logo, Mac, Mac OS and Macintosh are trademarks of Apple. Other company and product names may be trademarks of their respective owners.