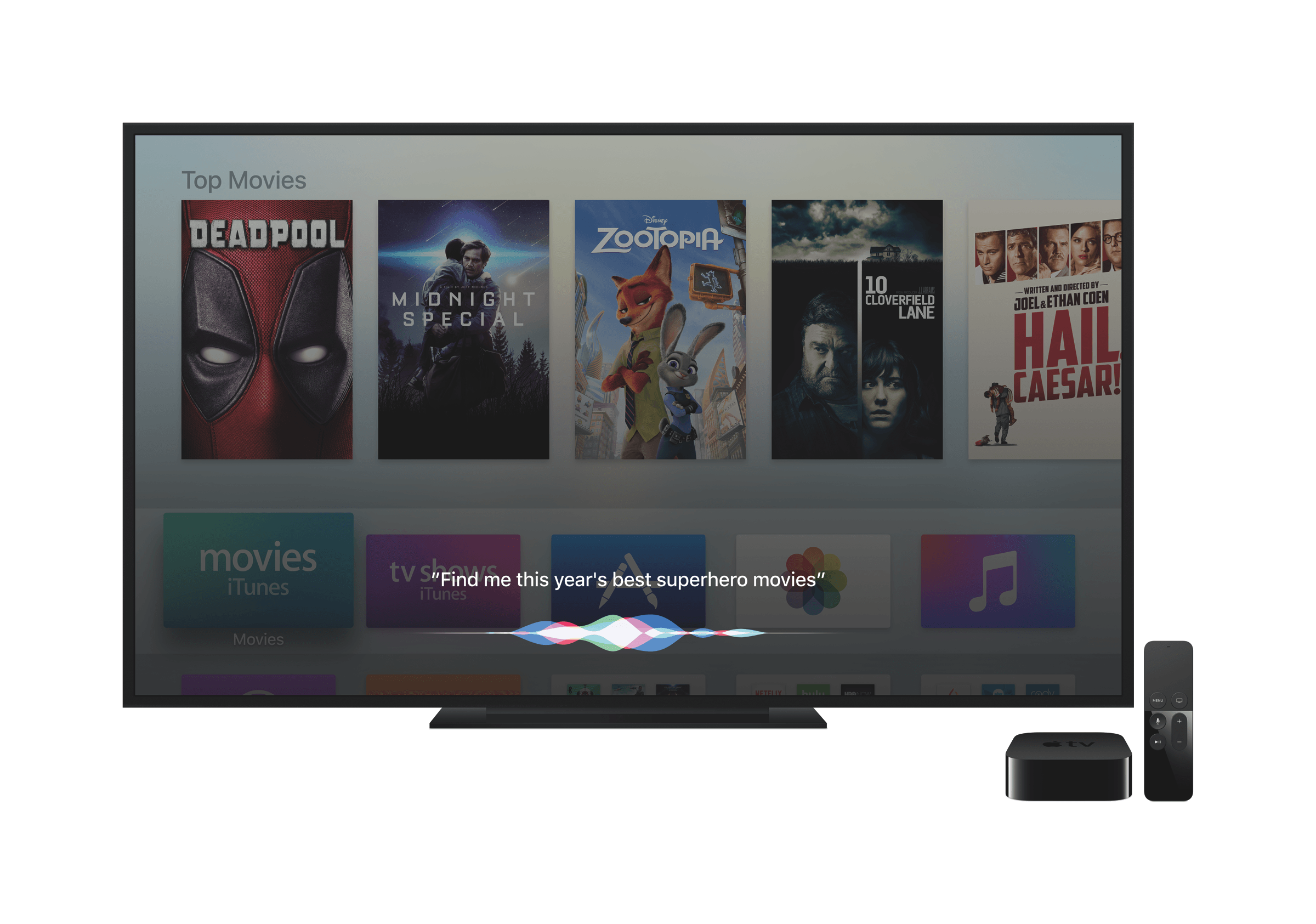 At today’s WWDC keynote event, Apple introduced the newest features set to come to their tvOS operating system this fall. Among the marquee features of the release are improved Siri functionalities, single sign-on, new developer APIs, a brand new Apple TV Remote app for iOS, and more. During the introduction of the update, Apple’s Eddy Cue also announced that since the introduction of tvOS last Fall, there are now 1300 video channels available for Apple TV, and 6000 total native apps that can be downloaded from the Apple TV App Store.

Apple revealed at the event that Siri’s search feature on Apple TV now searches through more than 650,000 TV episodes and movies. In the updated tvOS these searches are expanding capabilities to encompass topic searches for movies. Queries like “show movies about baseball” or “find documentaries about cars” will now surface relevant movies.

Siri can also now search YouTube directly (“search YouTube for cat I’m a kitty cat”), as well as allow users to tune directly into live channels (“watch ESPN”). Finally, Siri on the Apple TV will now allow users to fully control their HomeKit devices (“set the temperature to 70 degrees”, or “turn on the living room lights”).

One of the more exciting features of the tvOS announcements is the new availability of a single sign-on option. This will allow users to have a centralized location in which to sign into their cable or other pay-TV provider a single time. Once they’ve signed in, any apps which require that sign in for authentication will be able to access it on launch without requiring the user to sign in again in their separate silos.

During the single sign-on process, users will also have the option of viewing all available apps from the provider that they are signing into. This view will enable them to see all of the content that their sign-on allows them access to in a single place, and download the apps/channels that they are most interested in. Single sign-on authentication is available for all network-TV apps.

Interestingly, single sign-on is not a tvOS-only feature, but will also be coming to iOS with the release of iOS 10 this fall.

The new update for tvOS is also going to enable support for Apple’s new Apple TV Remote app. The redesigned remote app now includes all the same features available on Apple’s Siri Remote, which means it can be used as a controller to play games, as well as a far more convenient way to type in your passwords using the iOS keyboard instead of swiping back and forth between letters on the Apple TV. The app will also allow sending commands to the Apple TV’s Siri by speaking into the phone, so the full feature set of the remote is available. Next time your Siri Remote disappears to never be seen again, you can now just switch to the Apple TV Remote app instead of dropping over $70 on a new one. (Or just check between your couch cushions.)

Other improvements in the new tvOS include a nice looking new dark mode, a redesigned Photos app to match the changes that Photos for iOS 10 is bringing (including the new Memories feature to intelligently collect groups of related photos and videos and allow you to relive memories in new ways), and a redesigned Music app (also to match its shiny new iOS companion). Finally, tvOS will now pick up a feature that’s worked among iOS devices for quite some time: automatic downloads of purchased apps. When you enable this feature, you can now download an app on your iPhone or iPad and have your Apple TV automatically download the TV version of the app (if there is one). While I’m not always a fan of this feature between my iPad and iPhone, it could be a convenient way to get around the continued lack of a good solution for linking to tvOS apps to download them.

While not particularly revolutionary, the new tvOS looks like a solid update all around, including several new features which will make the experience of using tvOS demonstrably smoother for new and old users alike. tvOS is Apple’s newest operating system, and has been available to consumers for less than a year. It’s nice to see that Apple is continuing to iterate on its vision for the system, and is not letting it deteriorate like the old Apple TV’s operating system did for years.

The new tvOS is available as a developer preview today, and will be released for all users as a free update this Fall.