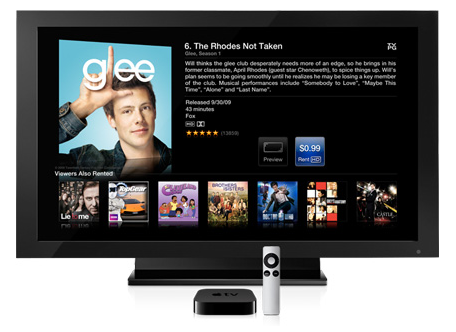 The iTunes Store and the current generation Apple TV can currently playback 720p video without issue. 1080p video, however, is the apple in every blu-ray owner’s mind. If Apple doesn’t want to provide customers with high-definition video, then why bother streaming video from Apple to the big screen? Movie-goers may want to hold onto the cash in their pocket before they spring for an alternative just a little while longer. AppleInsider was advised that 1080p video could become the norm beginning this fall with the availability of higher definition content and an updated Apple TV.

A higher resolution format for video, dubbed HD+ for 1080p content, is rumored to be an option alongside SD and HD video. 20th Century Fox as well as other large movie studios are said to be submitting films encoded with with an average bitrate of 10,000 kbps at 1920 x 1080p resolution. An updated Apple TV with an A5 processor would have no problems in playing back high definition content — the rumor would also coincide with an updated iPad 2.

If Apple is going to be attacking the media front with 1080p video this fall, a higher resolution iPad to play that 1080p content on makes some sense. While it’s not a confirmation, Apple could roll out an updated Apple TV alongside an iPad 2 HD to play back HD+ video. The iPad 2 HD would be rumored to have a resolution of 2048 x 1536, well beyond the requirement to playback 1080p at full resolution. With the A5 processor already in place, the iPad 2 HD would need nothing more than a display adjustment in coordination with a new content launch.