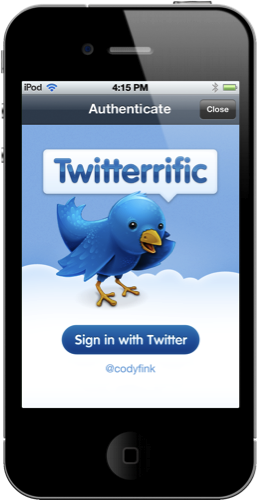 Twitterrific 4.2 is available on the App Store for both Mac and iOS right now if you’re so inclined to keep on top of the latest updates, and there’s some new major additions that we think you’ll really love. There’s also some big changes to how you’ll sign in–thanks to the way Twitter is requiring 3rd party clients to authorize your account–thus making 4.2 a mandatory update to comply with Twitter’s rules. 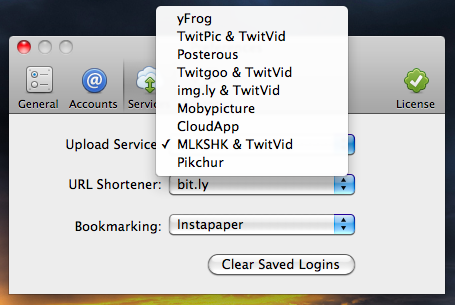 The Iconfactory has added a few new fun services to Twitterrific, including MLKSHK and Pikchur for images. For MLKSHK, the default video service becomes TwitVid as with TwitPic and Twitgoo. Images from MLKSHK and Pikchur will also be displayed in-line on the main timeline. For folks like @SteveStreza who prefer an alternative to Instapaper, Twitterrific now supports Read It Later for saving links. Twitterrific also sports a third party URL scheme for sending links to the blue bird. 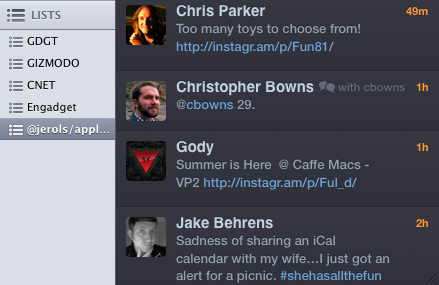 With the addition of new services comes some terrific usability updates as well. Lists will now only show the @username for lists you’ve subscribed to. Your own lists will now longer display your username before the list name. In the iOS-version of Twitterrific, you can now adjust the auto-refresh rate from never to thirty minutes while the app is open. 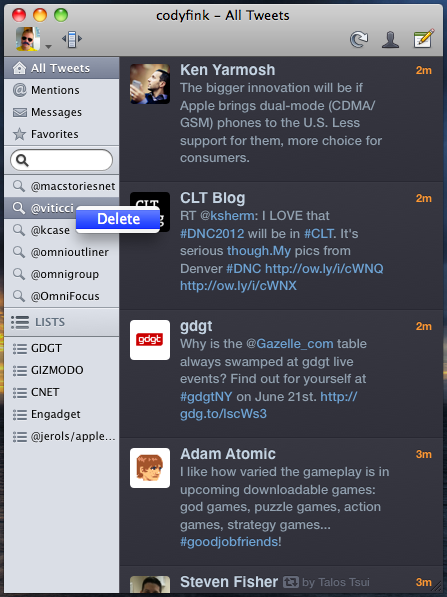 In the sidebar, you can finally delete searches! Simply right click and select ‘delete’ on the added search to remove it from it from Twitterrific. In the iOS app, simply swipe across a saved search to delete. Twitter does give you the ability to send direct messages to users who don’t follow you, and Twitterrific has followed suit by giving you that ability. The Iconfactory has also improved how your position is maintained in the timeline after long periods of inactivity.

The biggest change, however, has to be the newly added OAuth integration. It’s unfortunate that Twitter is forcing third party developers to go this route, but all developers have to comply or remove the client’s ability to send and receive direct messages. The Iconfactory has complied (as will others), but unfortunately the solution isn’t so pretty. You’ll be required to log in via Twitter.com, which will take you from the app, to the web browser, and back as you authorize the app. It’s terribly clumsy, especially if you have to activate multiple accounts, but we’re going to remind users that there’s not much Twitterrific can do about this: don’t leave it a bad rating for this feature. To Twitterrific’s credit, the Authorize splash page is really really pretty (as is the whole app).

That wraps up all the new additions to Twitterrific 4.2. You can download Twitterrific from their respective App Stores using the links below.

Twitterrific for Mac in the App Store

Twitterrific for iOS in the App Store