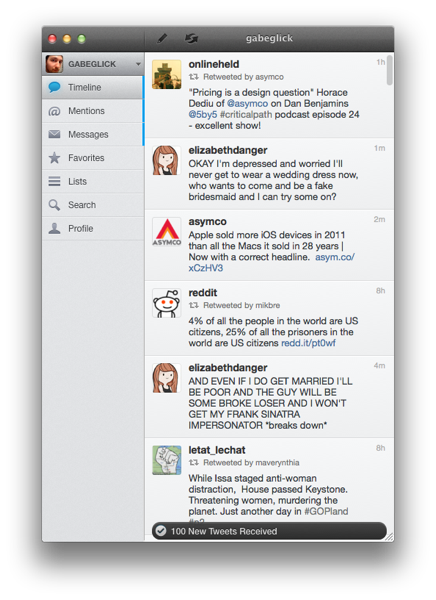 I have been a heavy user of Twitter for Mac since it was first released over a year ago. While certainly not perfect, for me, it is the gold standard of desktop Twitter apps. As such, it is impossible for me to be objective when reviewing a new client, as I will inevitably end up comparing it to Twitter for Mac (hereafter Twitter.app), so I’m telling you here and now that I didn’t even try to do otherwise. As a result, much of this review consists of comparisons between Osfoora and Twitter.app, and the best I can hope for is that other long-time Twitter.app users find it useful. So let’s get into it.

Scrolling and animations seem as smooth as Twitter.app, which is no small accomplishment. Switching sections with the keyboard is just as fast as it is in Twitter.app, and the similar sliding drawer animations helped me to feel right at home.

When switching sections, Osfoora does not automatically scroll you to the top. Instead, it keeps your last viewed position intact until you scroll up or down yourself. The exception is if you have “Keep Scrolled to Top (If already at the top)” turned on in the Settings and leave a section with its most recent tweets displayed. I find this better than Twitter.app in some instances (like checking a conversation in Mentions, jumping back to your timeline to view the latest tweets, then jumping back to Mentions without losing your place) and worse in others (when you want to scroll up to the most recent tweets without touching the mouse or hammering on the page up/page down keys).1 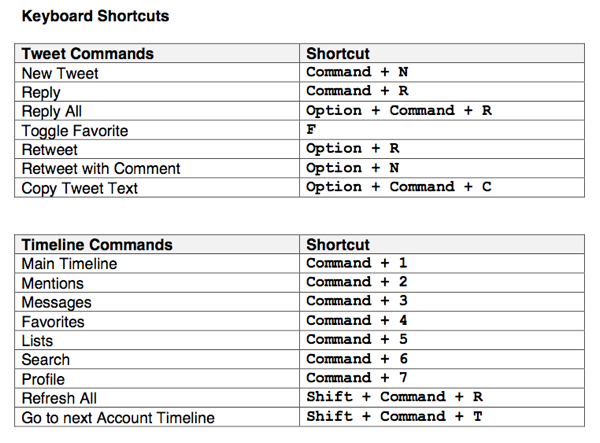 Osfoora carries over some of Twitter.app’s most useful keyboard controls, like hitting ⌘1 to go to your timeline, ⌘2 to go to mentions, ⌘3 for DMs, and so on for all the major sections. Similarly, hitting the right arrow key on a highlighted tweet will show you the conversation (if it’s a reply to another tweet) or the user’s profile (if it’s a self-contained tweet). Other controls, like the one for viewing images, are different (right arrow in Twitter.app, Return in Osfoora). Some are not here at all, like the ability to hold down Option and hit the right arrow key while highlighting a tweet to bring up a context menu allowing you to jump to any links, users, or hashtags contained in the tweet. And there is one glaring omission: the ability to open links with a keystroke. Opening links is one of the most frequent things I do with Twitter, and as a heavy keyboard user being forced to take my hands off it to use the mouse to click a link is painful. 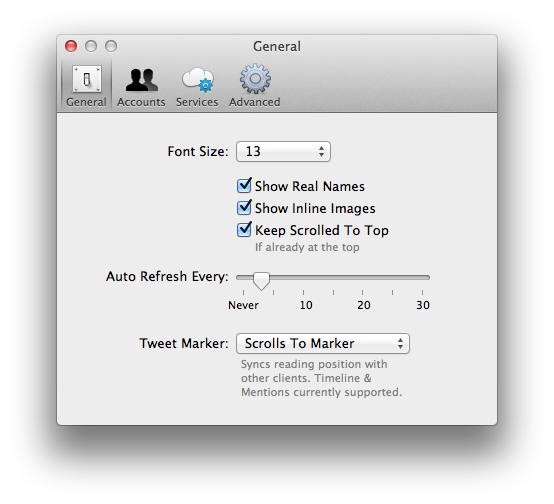 Speaking of things that are painful, I can’t get around the lack of a livestream. I’ve become very accustomed to seeing new tweets and replies instantly appear when using Twitter on my Mac, so having to refresh manually or wait for the auto refresh to kick in feels like a huge step backwards.

Where Twitter.app allows for multiple keys to accomplish the same tasks, Osfoora limits you to one. You can’t use any of the arrow keys to close an image, only Escape. When viewing a conversation, you can’t use Escape to go back to your timeline, only the left arrow. One of Twitter.app’s great accomplishments is how it provides multiple intuitive methods to perform the same actions, and unfortunately Osfoora feels limited in comparison.

Unlike Twitter.app, Osfoora does not currently have a way to directly look up user profiles. The only way I have found to find a particular user was to use the Search section, which is messy and indirect as you have to look over a wide swath of tweets and then click (again, no keyboard controls) on the name you want to view.

Upon loading up a user’s profile, I found myself wishing there were Twitter-like keyboard controls to move between different profile sections. As of now, the only way in Osfoora to switch between a user’s tweets, mentions and faves is to use the mouse. On top of that, you have to go back to the user’s profile to view a different section, whereas you can switch between them freely in Twitter.app. I also wish that a user’s profile loaded up their tweets underneath by default instead of having to explicitly click on them, the way Tweetbot for iPad and, you guessed it, Twitter.app does.

Two things I do like about Osfoora’s profile views: I like that, unlike Twitter.app, you can see a user’s followers and followees without going to Twitter’s site. And I like that when you look at their mentions, you can view conversations the same way you would on the timeline, so it’s easy to see which mention is replying to which tweet. 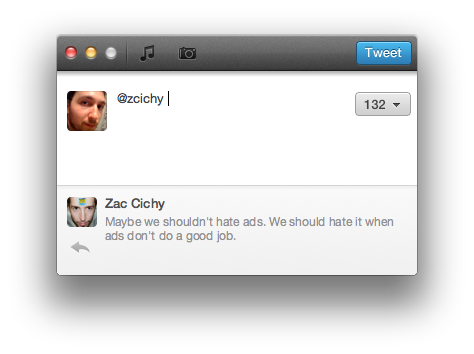 Touch navigation is fine on iOS apps because that’s all they have, but the same is not true for the mouse and a good Mac app. Good Mac apps should not only be equally navigable via both the mouse and the keyboard, they should be optimized for the latter. And as you may have noticed from all my complaints about keyboard controls, Osfoora still has a long way to go in that area.

As many developers have lamented, building a new Twitter client is not easy. There are tons of different users with different tastes, a long list of “must have” features, new and evolving services to incorporate, and no end of existing competition. I don’t envy any client-maker their task, nor do I want to unfairly disparage their efforts. But the fact remains that, as Osfoora stands right now, it doesn’t offer enough to provide a worthwhile experience for Twitter.app users to switch, especially when the latter is free.

Osfoora for Mac costs $4.99 and can be found on the Mac App Store.