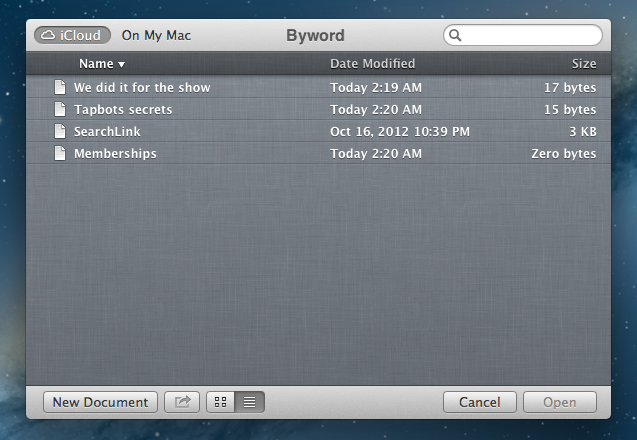 Over at Macworld, Dan Moren writes about the poor state of iCloud document sharing between apps and users:

Imagine being able to see other documents that friends or co-workers share with you, right in that same iCloud Open dialog box. You open a file and work on it, all of your changes are automatically saved and versioned so that when your collaborators edit it later, they’re sure to be working on the most up-to-date version.

Realistically, I imagine “simple collaboration” with other people (“send John a document”) would be the easiest for Apple to integrate in iCloud. Just like you can “find friends”, Apple could leverage the same infrastructure to “work with friends” – obviously making the necessary adjustments to switch from a location app to tools like Pages or Keynote.

It gets more complicated with stuff like real-time editing, sync, and tracking changes or differences. I believe there is plenty of room in the iCloud Document Library for a “Your Collaborators” tab that would show people working on a project with you or editing a document you are “subscribed” to. Imagine being able to receive “updates” for a document via iCloud email, or to assign to-dos of a document to a Reminders list. Imagine asking Siri “has John updated the presentation yet”? Once you start thinking about pulling all the iCloud strings together, the possibilities are endless.

Question remains as to whether it’s in Apple’s plans to tackle these requests in the short term. Which brings me to the issue with sharing files across iCloud-enabled apps. In my Mountain Lion review, I had a whole section dedicated to this subject. I concluded with:

I’d like an app’s visual Document Library — not just the Mobile Documents folder — to display files from other apps that can be opened and edited. It would enable me to use an elegant interface without giving up on the filesystem-oriented nature of the Mac, which, as much as it may be hidden by default in some areas, is still there and still part of my daily workflow.

On the flip side, I recognize how the majority of users don’t see this option as a must-have. The average user doesn’t fiddle with dozens of text editors, nor do they try 10 different PDF apps to see which one has the best support for annotations (I am guilty of this too). Still, I think there could be some edge cases in which those users would miss “shared iCloud documents” — for example, they could be using TextEdit on the desktop, but another text editor on iOS — so once again, I restate my hope that Apple will someday consider the possibility of making iCloud documents app-independent…as an option if nothing else.

After three months, I keep hoping that Apple is considering the possibility of real iCloud documents, not just app documents. Like Dan and I suggested, they could be the same files with an extra “shared” privilege; or – mine is a more futuristic alternative – iCloud could simply have its own “Documents” area that contains files any app can open and send updates to.

These things take time. As I said, though, I hope Apple isn’t simply dismissing the idea as a “power user request”. After talking to people who have upgraded to 10.8 for the past three months, I’m convinced file portability and inter-app access is something a lot of folks understand, not just nerds.