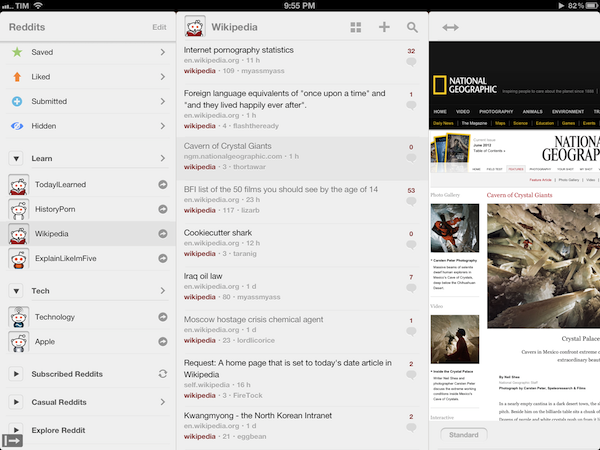 My favorite Reddit client for iPad, Alien Blue by Jason Morrisey, was recently updated to version 2.1, adding a number of functionalities (including iCloud sync, which will work alongside an upcoming update to the iPhone version) aimed at increasing the app’s Reddit-based discoverability features.

Inside Alien Blue, you’ll now find a well curated and up-to-date list of active subreddits ranging across a wide variety of topics. This list is maintained and updated nightly. If you see something missing, you can make a recommendation in any of the categories and they’ll be live soon after.

To better leverage Reddit’s wide-ranging amount of information available every day, Alien Blue now lets you easily organize similar subreddits (sections of the site) into groups that are synced to iCloud, and will automatically carry over to the iPhone once the new version comes out. At first I didn’t get the usefulness of groups – I was used to accessing my most-visited subreddits through Alien Blue’s sidebar, which, by the way, in version 2.1 seems to be more reliable at switching between “compact navigation” and extended panels depending on whether you’re holding the iPad in landscape or portrait mode.

Subreddit grouping, however, has changed the way I use Alien Blue. Aside from the convenience of neatly categorizing similar subreddits in the app’s sidebar, each group can be turned into a “front page” collecting all the most upvoted links of each subreddit. This means that, for instance, I was able to create a “Learn” group within Alien Blue, throw TodayILearned, HistoryPorn, Wikipedia, and ExplainLikeImFive in there, so that when I’m in the mood of learning new things and cool facts, I can enjoy my own “Learn” Reddit front page made of the subreddits I grouped. It’s incredibly smart.

Check out all the improvements in Alien Blue 2.1 in the official announcement post, and download the app at $3.99 on the App Store.