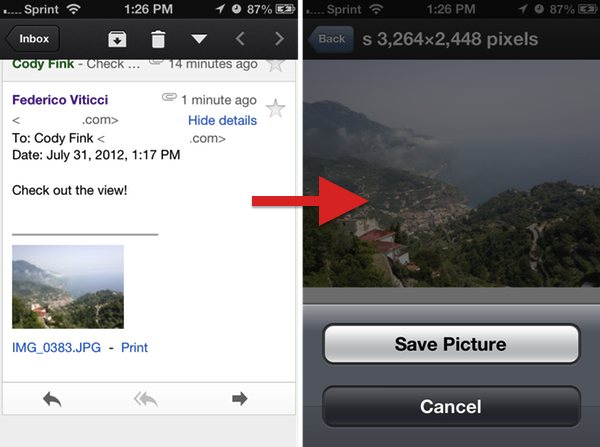 Gmail has a small update out this afternoon, promising all around smoother animations and scrolling, the ability to save picture attachments to your photo library, and bug fixes that squash some annoying issues.

Gmail 1.3 on iOS is certainly a bit speedier: scrolling through the Inbox and revealing the panel feels as smooth as a native app, although Gmail’s sliding animation to a message can still display lag here or there. However, the speed improvement doesn’t change that Gmail is a web app, with the Gmail splash logo being displayed at startup, network complaints when strained for bandwidth, and some “this doesn’t feel right” moments when composing email.

A new feature added is the ability to save pictures to your photo library, but it’s clunky, awkward, and not obvious. To save an image attachment, you have to open the image attachment in Gmail’s browser, then tap and hold on the picture to bring up the dialogue to save your picture to your photo library. Oddly, you can print from the message view, but you can’t save a photo (you have to open it first). I think the Gmail for iOS team would be better off replacing the Safari icon in their browser with a sharing icon, letting users Open in Safari, Save to Library, Open in App, or Print from a more familiar and traditional list of actions.

Composing email still feels awkward, with the compose window being relatively finicky and jumpy, but bug fixes have at least solved one annoying selection issue. Before, I couldn’t drag the cursor before the first letter of the first sentence in Gmail for iOS, but this is remedied in today’s update.

Gmail is passable as an app (it’s certainly not Sparrow) and it’s slowly getting better, but its flaws as an email client in a web view still show in the most important places, such as when working with attachments and composing a message. If you’re inclined on being in Google’s ecosystem, Gmail is free on the App Store.