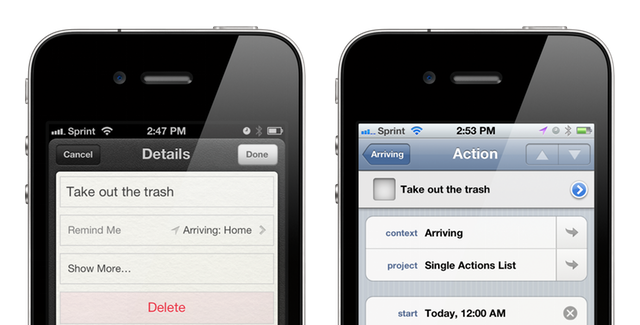 When I first got my hands on the new Reminders app in iOS 5, I launched it and scoffed under my breath. Sure it was cute but it was not for me. I have spent so much time developing a bond with OmniFocus that I don’t know if it could ever be broken. It probably sounds dramatic but OmniFocus and I have been through some hard times together, probably some of the worst in my life.

My wife hates when she sees OmniFocus projects related to something personal in our marriage but it is my trusted system and I use it for everything. I have never found a suite of applications that can do for me what OmniFocus does. I have tried so many productivity and task management apps that I refuse to count them for fear of realizing the amount of money I have wasted. I have a natural (or unnatural if you ask my wife) attraction to this genre of apps so of course I was excited to take a look at the new Reminders app.

Reminders is a simple, albeit extremely well done, list-making application. Its main appeal is the “geo-fencing” feature that will trigger a reminder based on your proximity to a predefined location. The concept is amazing to me. The only problem is Reminders does not easily integrate in to my existing system, thus I probably won’t be able to truly utilize it.

Some time had past since my initial experience with the beta for the Reminders app. I was still using my iPhone 3GS and features had been pulled from Reminders for this model, rendering it even more useless. When the new iPhone 4S was announced I knew I would buy it on day one. Among all the new features, I was most excited to play with Siri. I used the original Siri app when it hit the App Store long ago and remember showing it to my friends. I tried to impress them with its ability to recommend a restaurant around my current location – Siri failed to do so, they laughed at me, and I deleted the app. Times have changed. Apple bought Siri and baked it in to the operating system. Tell me, how could it not be awesome now?

I received my pre-ordered iPhone 4S and I could hardly wait to try Siri. One of the first commands I asked Siri was to remind to do something when I got home. Like magic, Siri successfully created the reminder by pulling the address from my personal contact information and added the task to the Reminders app. Right then and there it clicked, this app is a game changer. The accessibility it brought to quick and useful reminders is unrivaled. Although I knew OmniFocus would quickly follow suit with their own implementation of “geo-fencing” and I couldn’t wait to get my hands on it. 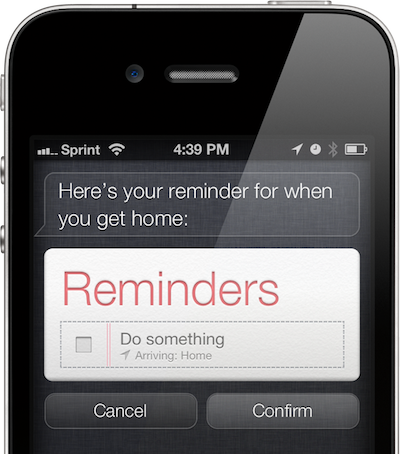 In the time that past while I waited for an OmniFocus update, I found myself instinctively using Siri to create tasks while my hands were unavailable i.e., in the car, at the gym, or doing yard work. I was able to capture thoughts, tasks and ideas more quickly and efficiently than ever before. Sure these tasks had no contexts and no projects associated with them, but I was logging and completing them when and where they needed to be done – isn’t that the point?

Of course that is the purpose of a trusted system and it worried me that I was actually finding enjoyment and productivity in something other than OmniFocus. I felt like I was doing something wrong. I enjoyed Reminders so much that when OmniFocus released their update that included “geo-fencing” I didn’t immediately download and try the new feature out. It was a good week before I would find the time to play with latest update.

Setting up the location based notifications in OmniFocus was nothing like the seamless experience I had with Siri and Reminders. I learned that I would have to bind an address or specific location to a context and manually set whether this context would be using a notification. That notification then had to be defined as Arriving or Leaving and I had no flexibility to choose this setting while creating the task. This meant I had to add four more contexts to my list which I was not happy about.

My Home and Office contexts became:

I know this is not a deal breaker and it is simply more of an inconvenience but it is a differentiation between the two apps that is worth noting. I then proceeded to test the reliability of each application’s notifications. In every situation both apps launched their reminders at the same exact time when arriving or leaving a location. From my experience, their accuracy was impressive. When I arrived to work I would park my car, take two steps toward the building and the “Office : Arriving” notifications would trigger. On my way home, the notifications would trigger as I would turn in to my driveway. It was quite amazing. 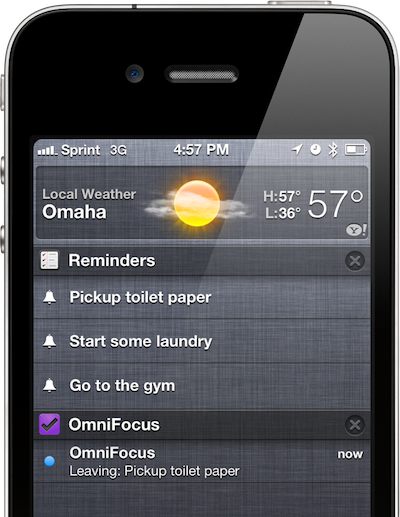 Another difference came when selecting the triggered notifications. A Reminders notification would take me to the Reminders app to check off the task, and everything worked as expected. An OmniFocus reminder would launch the OmniFocus app in some type of map view and then immediately crash. I know this is just a software bug that will likely be worked out in the next update but it happens now and it is pushing me closer to using the Reminders app for quick tasks.

Now I am not suggesting that this simple app is going to replace the OmniFocus suite. That would be impossible. The way these reminders are managed on the Mac are unusable in my opinion. I need more advanced task management software for many situations, but not for all of them. I can see myself happily using Siri and Reminders for more of those one off reminders that always felt frivolous and out of place in my OmniFocus “Single Actions List”. Tasks like specific items I needed from the grocery store were horrible to manage in OmniFocus and I could not easily share them with my wife. Reminders app solves this problem with shared lists and does so with style and finesse, telling Siri to “add item XYZ to my Groceries list”.

Reminders is a huge win for average users and GTD die-hards alike. I for one welcome the change in my trusted system and truly enjoy speaking my tasks to Siri. I can only hope that one day Apple releases an API for third-party applications so The Omni Group can add commands to Siri.

The Holy Grail: “Siri, add this task to my XYZ project in OmniFocus”.

That will be the day.