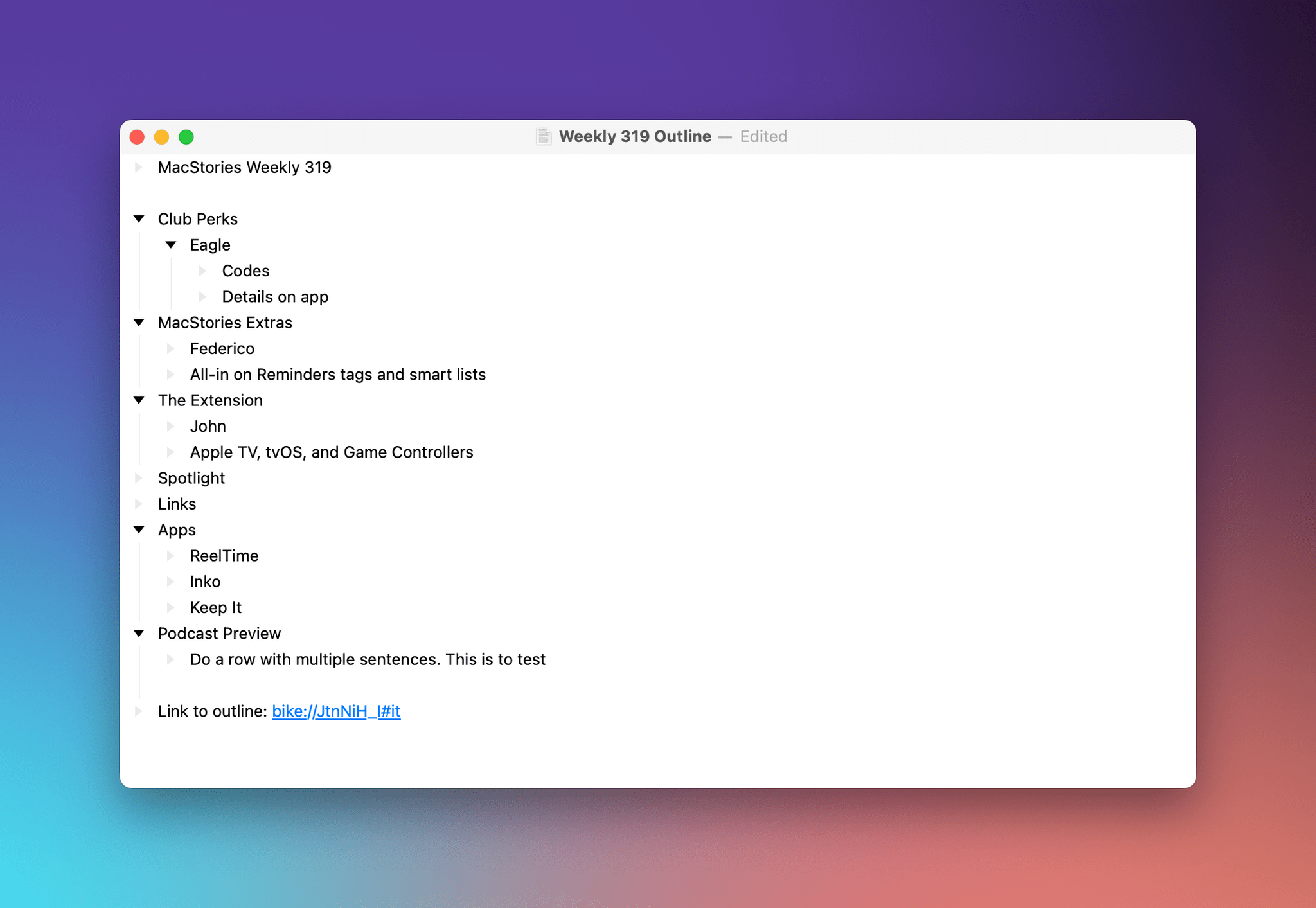 Bike is a brand new Mac-only outlining app from Hog Bay Software that executes the fundamentals of outlining flawlessly. The outline creation and editing workflows are polished, and the keyboard-focused navigation makes moving around a large outline effortless.

The app’s feature set is limited by design. That focus is part of what makes Bike such a good outliner. The care and attention that has gone into building a solid outlining foundation are immediately evident.

However, that focus comes with a downside. Bike is a simple app that won’t meet the needs of users looking for iPhone or iPad support, formatting options, Shortcuts support, or other features.

Overall, I like the approach Bike has taken a lot, but I think it has gone too far, limiting the app’s utility more than is necessary to maintain its simplicity. Let me explain what I mean.

Bike reminds me of Drafts 1.0. As originally conceived, Drafts was a fast way to input text on the iPhone that was destined for another app. The focus was on speed and simplicity.

Bike 1.0’s strength lies in its simplicity too. The app features unadorned text organized in a foldable, hierarchical structure. That’s it – text and a tab-based outline structure. There are no formatting options, fonts to pick, text color, highlighting, or any of the other customization choices offered by other outliners. There’s an elegance to Bike’s limitations that insist that you focus on organizing your ideas instead of procrastinating by decorating your outline, which I love.

Bike’s approach serves its feature set well, too. A lot of outlining apps are just glorified text editors. That works to a point, but the structured nature of an outline demands an approach tailored to organizing ideas. 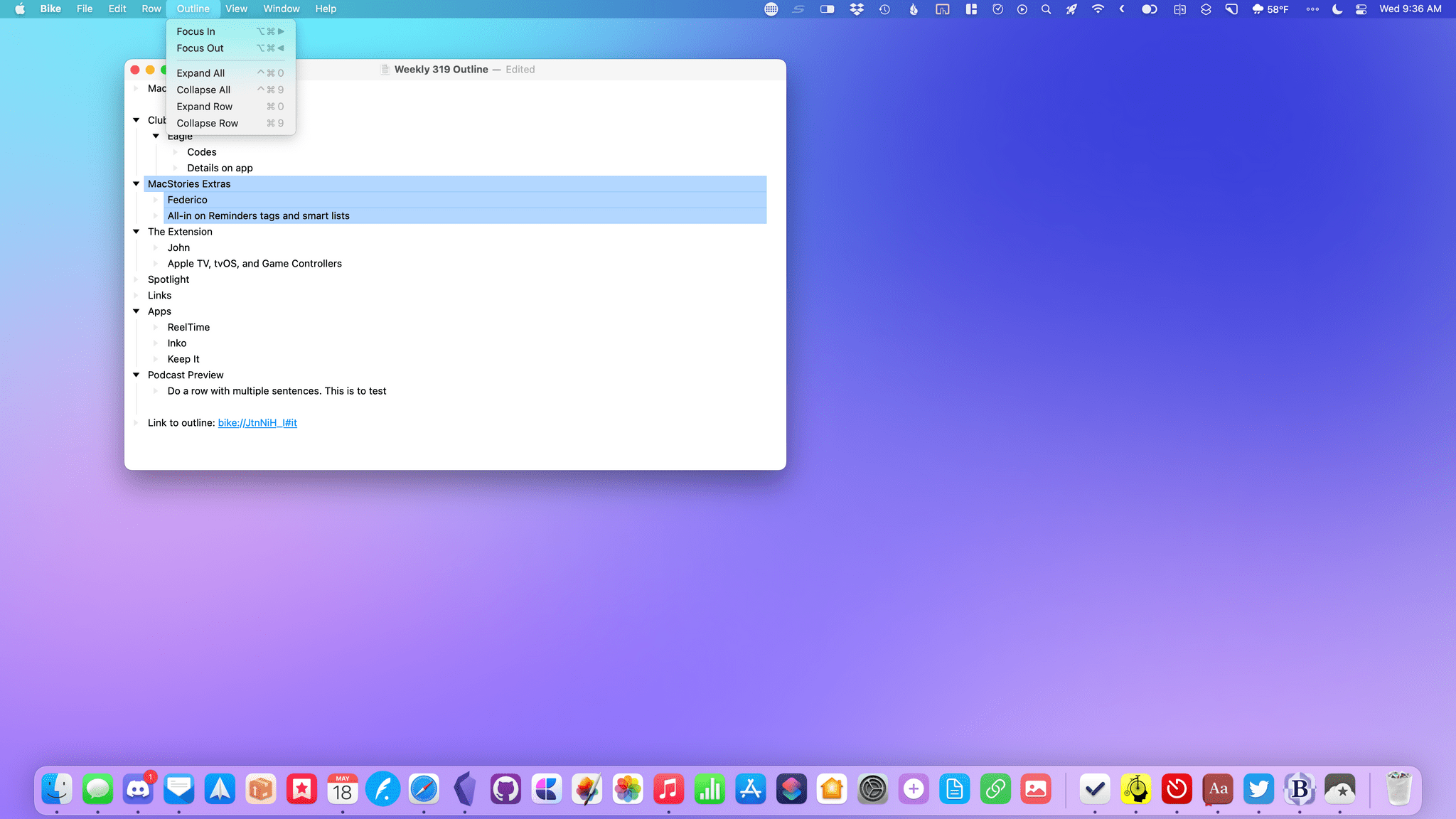 Every major feature of Bike has a keyboard shortcut.

Keyboard navigation and editing are at the core of what makes Bike such a powerful outliner. Multiple rows can be selected and a new parent row added above them with a single keystroke. Rows can be moved up and down through an outline’s hierarchy individually or as a group when multiple rows are selected, sections can be collapsed and expanded individually and all at once, and you can focus on one section of an outline at a time, hiding the others. 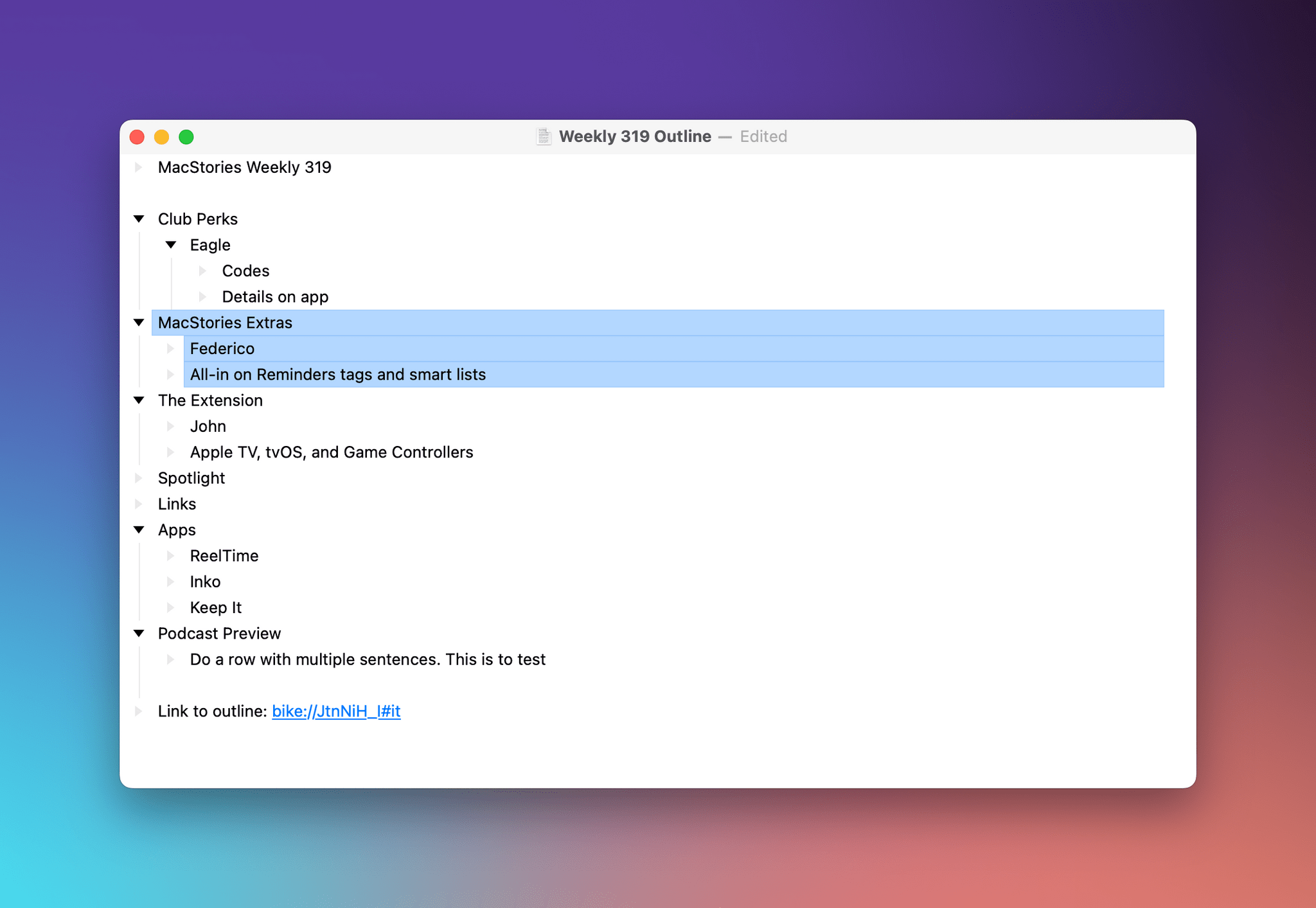 Bike’s outline mode selects entire rows, making it simple to move them around.

Bike also has a separate outline mode that’s toggled on and off using the Escape key on your Mac. When enabled, outlining mode highlights entire rows at once, allowing you to treat each as a unit. Because so many of the keyboard shortcuts for navigating an outline are also available in editing mode, I haven’t found myself turning to outline mode often, but it does allow you to use the left and right arrow keys to expand and collapse sections, whereas, in editing mode, those keys simply move the cursor. In editing mode, expanding and collapsing sections is accomplished with ⌘ + 9 and ⌘ + 0. 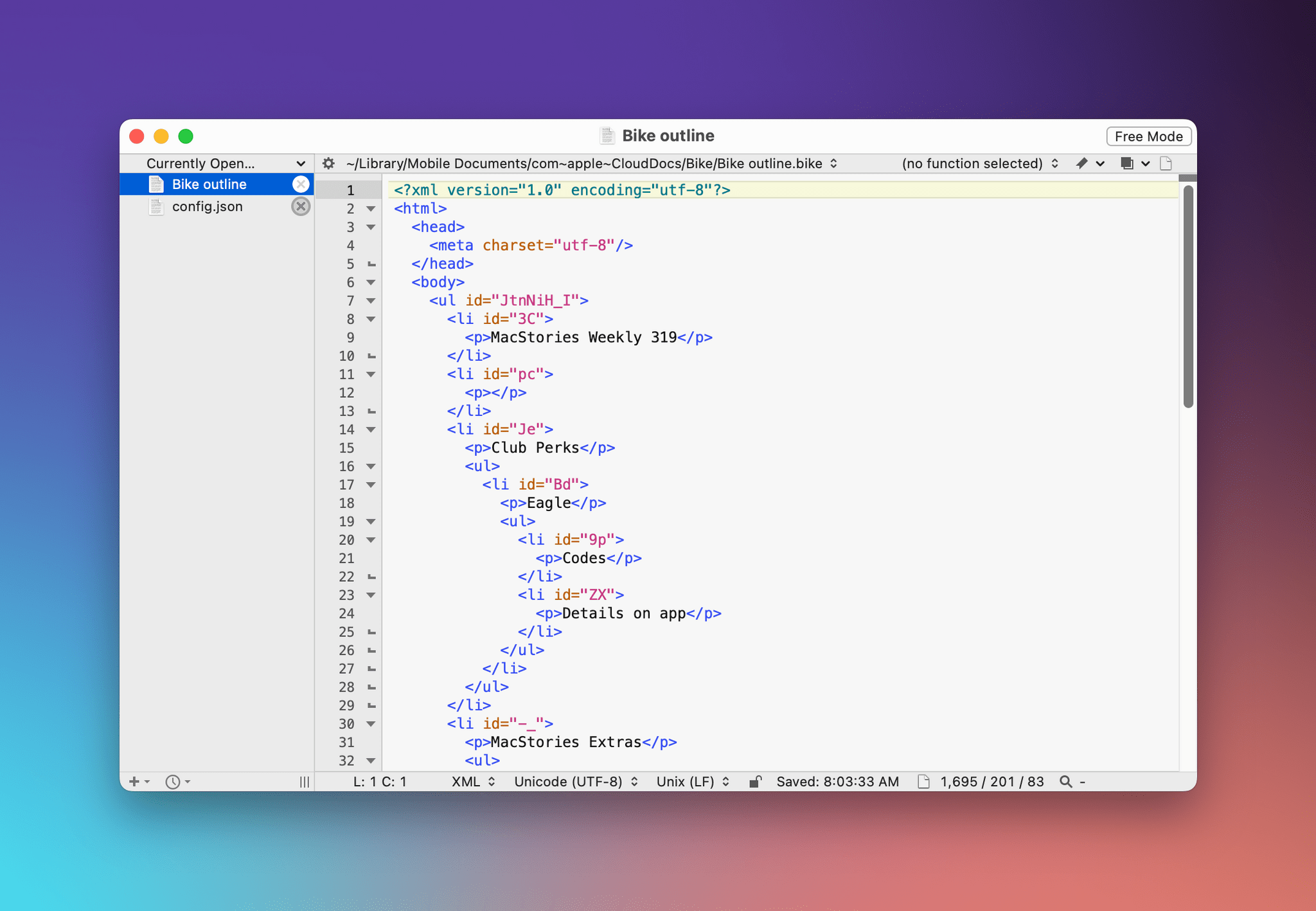 Bike outlines are HTML files under the hood.

Outlines can be saved in three different formats. By default, Bike saves to a proprietary .bike file that is really just HTML. That means you can right-click on a .bike file, open it in Safari or an editor like BBEdit if you’d like, or manipulate it as HTML in Shortcuts, for example. Bike’s outlines can also be saved as opml files, which is a common outliner format used by other apps like OmniOutliner, or as plain text, which structures your outline using tabs and new line characters. 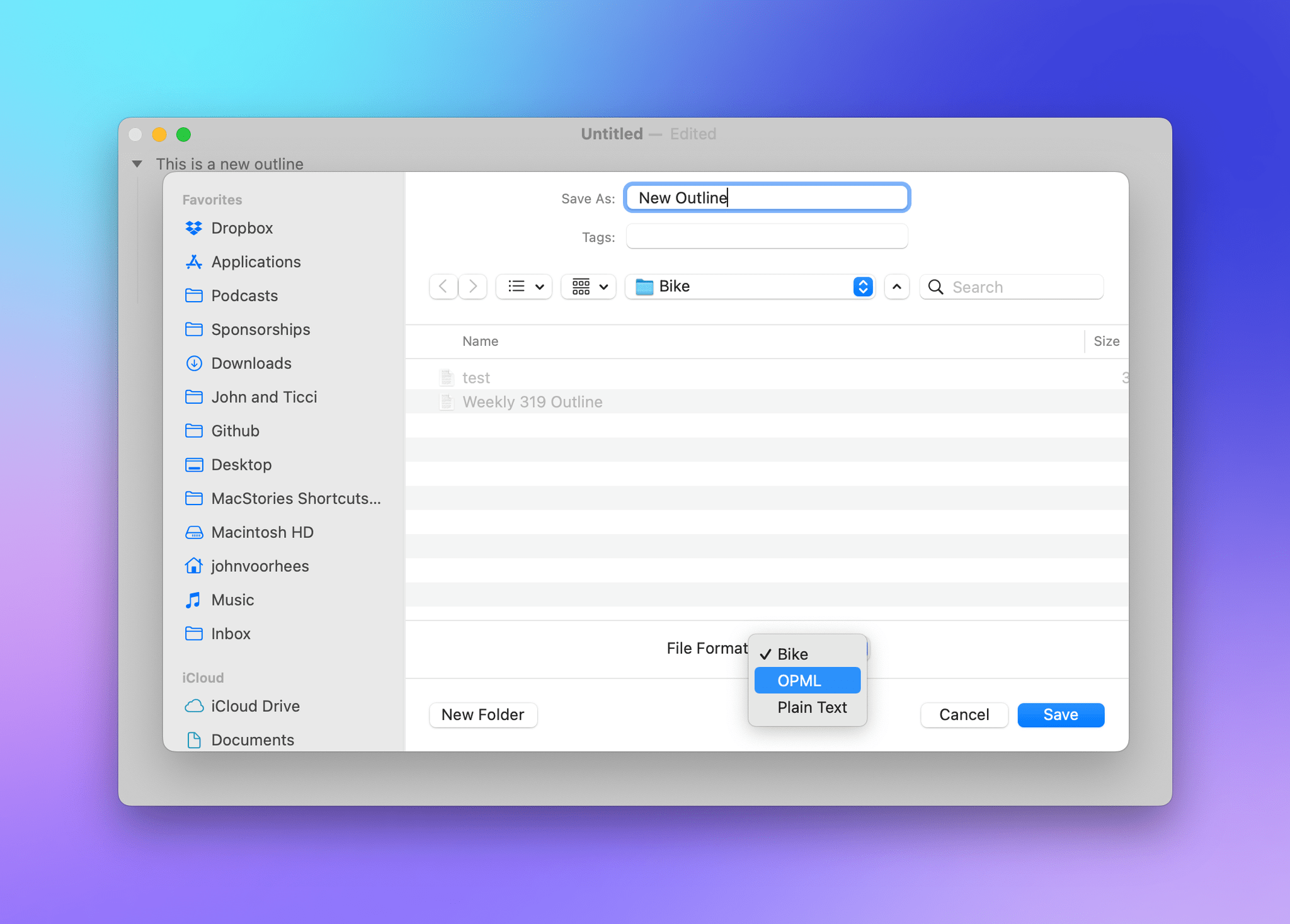 The file format for your outline is only available in the initial Save dialog.

Bike’s URL scheme is a useful way to link to outlines in other apps, so you can get back to them or a particular section quickly. However, there’s no UI affordance to let you know that you’re in Bike’s focus mode, so opening directly into a section of an outline can be disorienting. I’d like to see some sort of focus mode indicator added to Bike to let users know when there’s more to an outline than what’s currently onscreen. 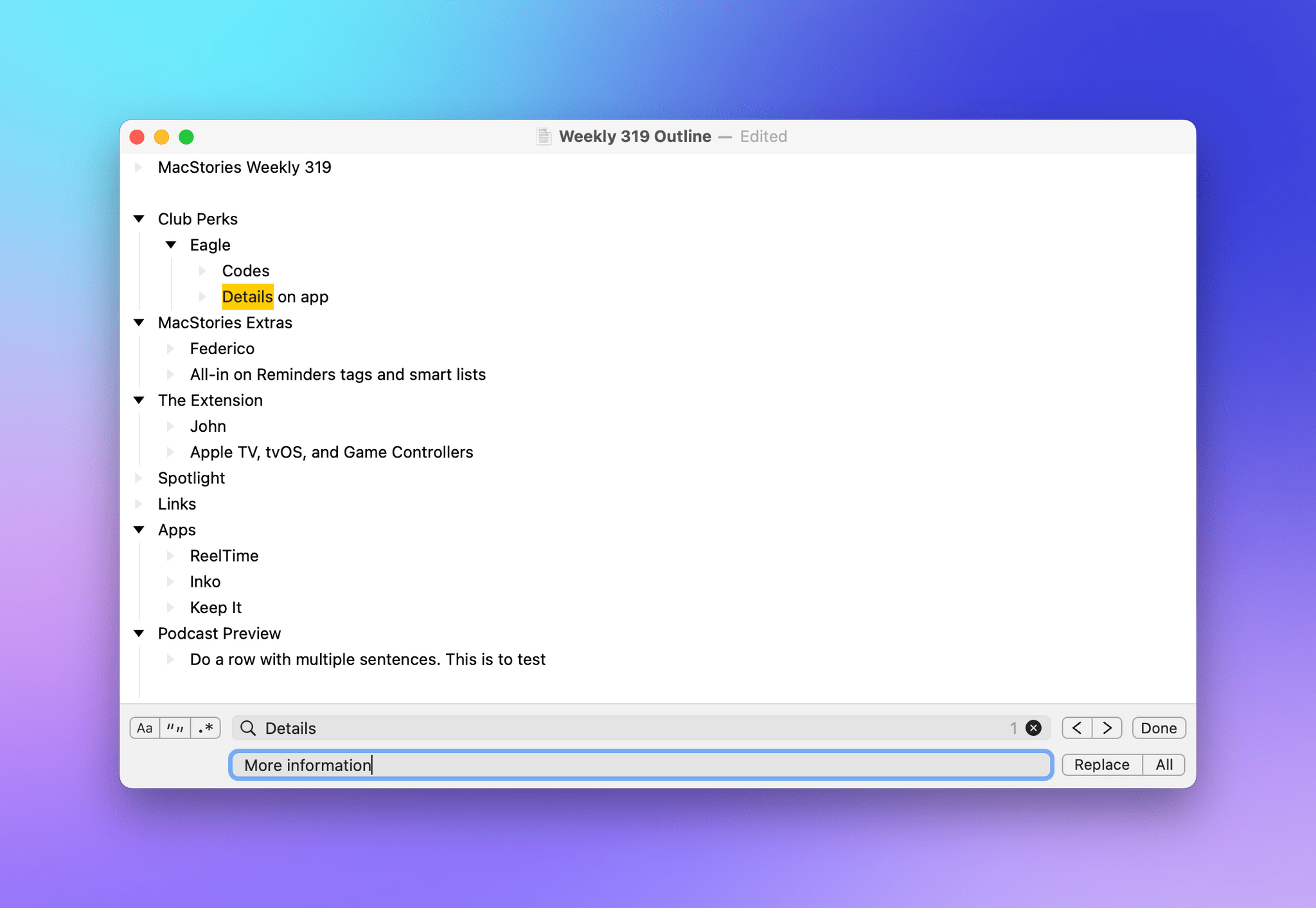 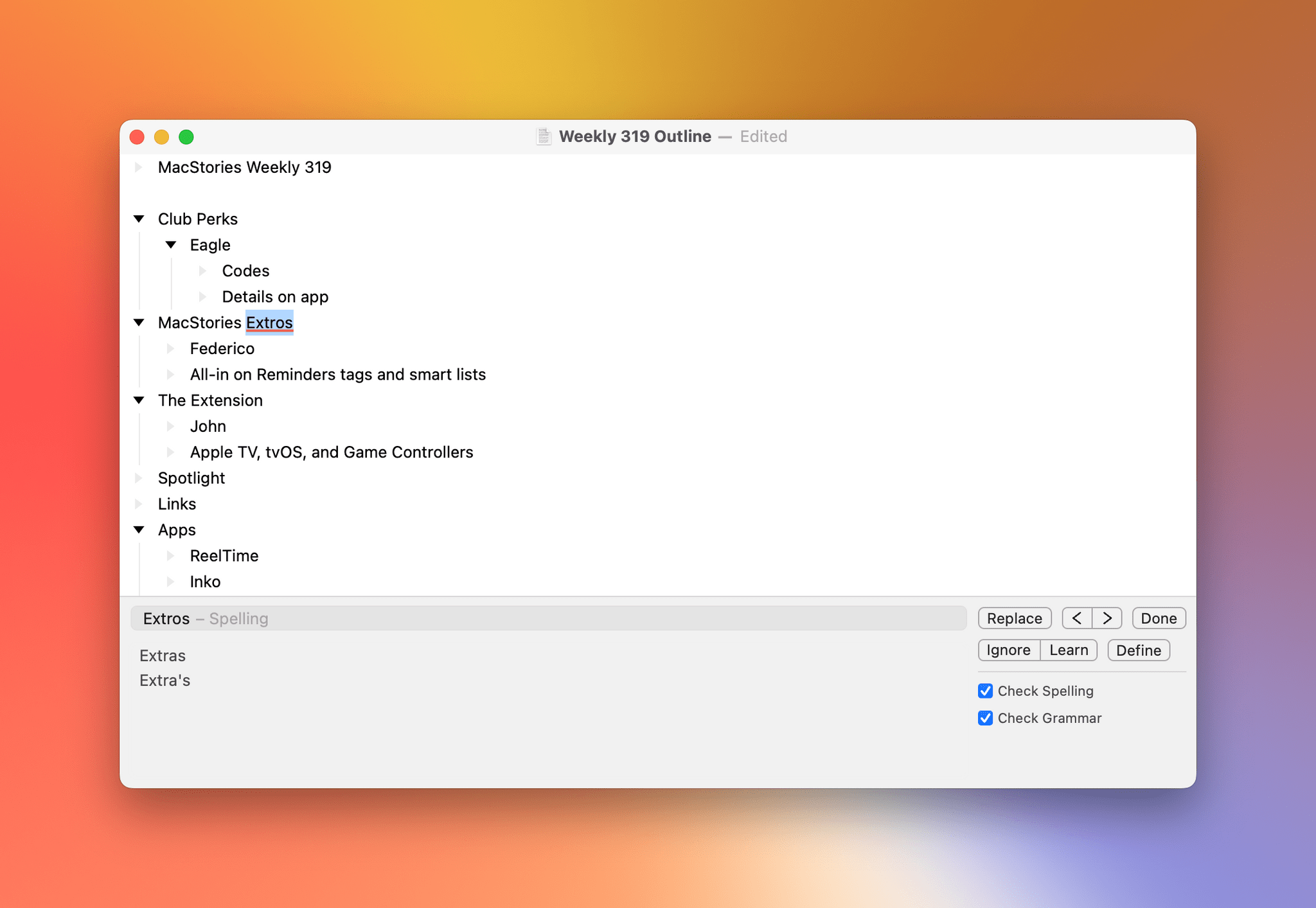 Bike can also check your spelling and grammar.

Other notable Bike features include find and replace and spelling and grammar panels that can be activated from the Edit menu or with a keyboard shortcut. Bike also supports floating windows above all others and an extensive AppleScript dictionary of commands for accessing the components of an outline down to the level of individual rows. Apart from the couple of items mentioned above, there are a few big-ticket items that I’d like to see added to Bike in the future. The first is an iOS and iPadOS app. The multiple file formats offered by Bike mean you can save to a format that can be opened on an iPhone or iPad for editing in a different app. However, that means abandoning Bike’s excellent editing and navigation features on those devices, which is a shame because outlines are the sort of content that is useful on any device. However, if you work primarily on a Mac, the fact that Bike is Mac-only likely won’t be an issue for you. 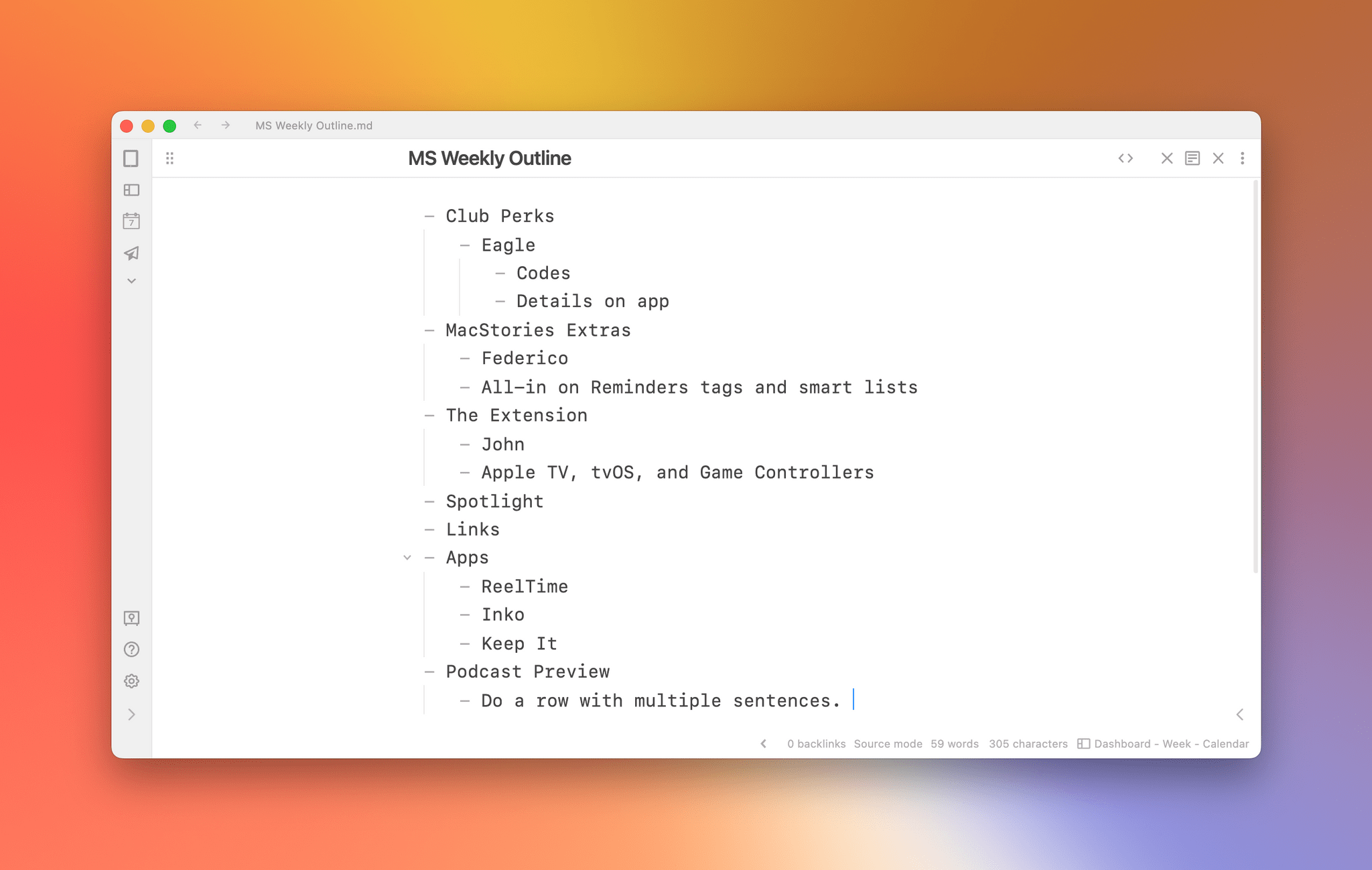 Second, I’m not a fan of the decision to not offer bulleted and numbered outline options. That would undoubtedly increase Bike’s complexity, but both options are so common in Markdown and Rich Text environments that their absence makes Bike outlines less useful in other apps.

Finally, I’d like to see Bike’s powerful AppleScript actions adapted for use in Shortcuts. The lack of bulleted and numbered lists in Bike immediately made me wonder if I could automate adding them. That should be possible with AppleScript, but the lack of Shortcuts support unnecessarily limits Bike’s automation capabilities to AppleScript users.

Bike is the most elegantly designed outlining app I’ve tried on the Mac in a long time. Working with outlines is fast and effortless regardless of their size. As a result, if you like organizing your ideas in a structured outline format and work primarily on a Mac, you can’t go wrong with Bike. Its focused approach to outlining is excellent.

However, the choice is less clear for Mac users who want to outline on an iPhone or iPad too. On the one hand, Bike supports OPML and plain text file formats, which are both highly portable. There are plenty of iOS and iPadOS apps that you could use to fill the gap. On the other hand, though, if you’d prefer a unified approach across devices, you can’t get that with Bike.

Personally, I’ll continue to experiment with Bike when I’m on my Mac. The app’s limitations mean that I’ll stick with Obsidian for most of my outlining needs. However, Bike’s exceptional keyboard-driven approach is one I’ll be keeping an eye on and looking for ways to fit into my workflows.

Bike is available directly from Hog Bay Software for $29.99.