Speaking of App.net, the developer community has been busy building iOS, Mac, and web clients for the service, which promises it’ll never try to purposefully harm or limit the third-party ecosystem. Of all the iOS and Mac clients currently in development (I’m testing a bunch of them, and good things are coming soon), two are currently available on the App Store: Rhino and Adian.

As John Gruber wrote in 2009, Twitter clients used to be a UI design playground for developers attracted to the service that was just about to become mainstream. The App.net clients available today sit in the middle ground of leveraging the conventions established by Tweetie, Twitterrific, and Tweetbot while working with a service that’s not nearly as popular as the Twitter of 2009, when third-party clients exploded in terms of popularity and usage.

Most of the App.net clients currently in development look and perform exactly like Twitter clients, but they are working with a platform with a much smaller scale, even by 2009 Twitter standards. This is perhaps indicative of the current status of App.net – a service that uses the foundation of Twitter while quickly adding its own unique features – and is undoubtedly helping with creating these clients (a smaller community means easier scaling and lots of feedback), but it also leaves a strange feeling of “seen that, done that”.

App.net clients will have to find their own identity just like App.net will have to grow into a different yet solid alternative to Twitter. Developers need time to figure this out.

What we have today is two clients that, for the most part, work like Twitter clients. Rhino features a clean interface design to switch between your main timeline, mentions, the global stream (which, thanks to the small community, is still usable), and your profile. The tabbed interface is reminiscent of just about every Twitter app for iPhone. There’s pull to refresh, a compose screen accessible with a button in the upper right corner, clickable usernames, hashtags, and links. If you ever used a modern Twitter client, you’ll know how to use this. The language is the same. 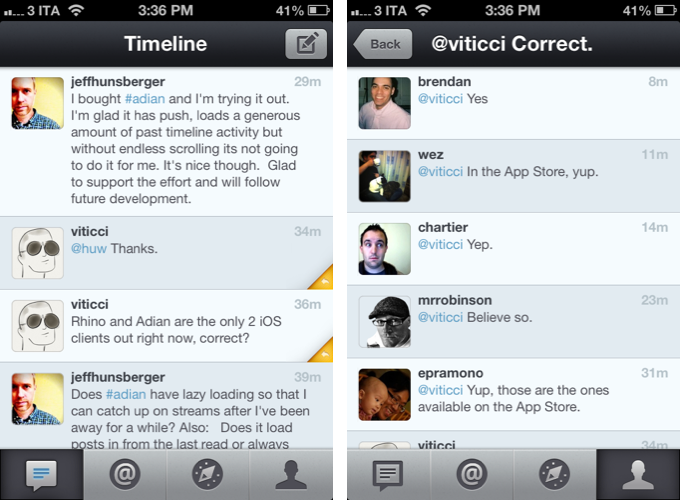 Obviously, there’s an early glance at the differences that will distance App.net from well-established Twitter conventions. You can double-tap on a post to start a reply; posts can be up to 256 characters long; and conversations – called Threads – are already properly supported and visualized with a yellow ribbon next to a post. Profile views show both the profile picture and cover photo, albeit the latter isn’t always displayed correctly. You can follow or unfollow people from within the app, and quickly reply to a post by swiping on one in the timeline and tapping on the Reply button.

App.net’s early nature is also the cause of Rhino’s limitations. There’s no search; no support for starred posts yet; no repost option, and no support for annotations. I don’t think if this is related to the client side or the API, but, right now, there’s no support for timeline gap detection either, making it hard to remember your initial position in the timeline and come back to it after a few hours. For sure, Rhino the app isn’t making a great use of tap or swipe actions in this first version, relying solely on the aforementioned swipe-to-reply but lacking any other form of tap & hold or gesture to speed up navigation.

Still, Rhino is free, and worth checking out for its elegant design and easy flow.

On the other hand, Adian is different. It is a paid app – made by the same developer behind TweetFire, which I believe is the going the way of the dodo thanks to Twitter’s API changes – and it justifies its price with extra features you won’t find in Rhino (the UI design is, obviously, the one of a Twitter client). You can swipe on a post to bring up a Tweetie-like action bar to reply, repost (with the user-made » @username syntax), open profile, and view thread. Double-tapping in Adian doesn’t start a reply, but a single tap on a post opens another view to view metadata (timestamp, client used), and send links to Instapaper or Pocket. 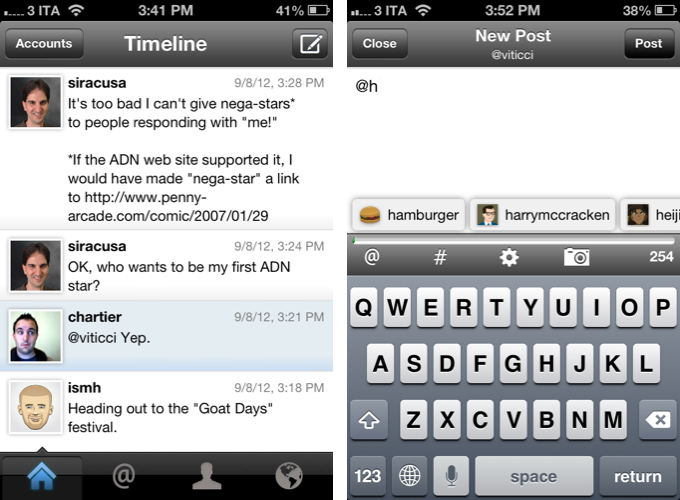 You can view profiles (without cover photos), “mute” users, but you can’s star yet. Links aren’t clickable in the timeline (same with usernames), but you can tap & hold in the single post view to copy or open a link. I’m not sure if this is exclusive to iOS 6, but you can also send a link to Safari’s Reading List without leaving the app. More sharing actions are supported through the in-app web browser.

Adian isn’t nearly as polished as Rhino, but it is more functional. Push notifications are supported for mentions, and they have been working reliably for me (they also use the same sound notification of TweetFire). You can add multiple accounts, save posts as drafts, and the compose screen is fully-featured when compared to Rhino’s. For instance, it does @username auto-completion as you type, it can shorten links through bit.ly, and it can upload photos to FireFoto or Flickr. The app also comes with some basic photo-editing features done with (what I believe) is the Aviary SDK.

Today, my recommendation goes to Adian if you’re looking for more functionalities (such as repost) and push notifications (and: ambient notifications if replies arrive when you’re using Adian). The app isn’t perfect, there are some bugs to fix, and the design could use some clean-up in several areas (pinstripes?). You can find Adian at $4.99 on the App Store.

Rhino and Adian look like Twitter clients and share the same limitations and compromises made to ensure a decent experience today. This is indicative of the current state of App.net overall, but like I said: this is an exciting time to watch this platform grow.