In spite of Phil Schiller’s semi-official confirmation that the white iPhone is real and coming this Spring (and it’s a beauty), people keep finding references to the mythical white unit that was announced last year and never shipped.

Interestingly enough, a MacRumors reader found an icon in the iTunes 10.2 resources that suggests a CDMA version of the white iPhone 4 will be released as well, as iTunes contains two different graphic files for the GSM model and CDMA. Speculation in the past months simply pointed to the white iPhone as a GSM unit, but since the release of the Verizon iPhone many wondered whether the white iPhone could be also released in CDMA flavor. An icon found in iTunes is no proof of Apple’s plans for the white iPhone, and could be the result of a designer thinking ahead and preparing graphic files “just in case”.

One MacRumors reader did some poking around in iTunes 10.2 resource files and discovered an icon for the white CDMA iPhone 4 that would be displayed in the Summary window within iTunes when the device is connected. The image is distinct from the original white iPhone 4 icon and clearly shows the antenna break on the top right side of the CDMA version that is not present in the GSM version.

The white iPhone has also been spotted in the developer preview of Lion, as reported by RazorianFly. The file is located in /System/Library/CoreServices/CoreTypes.bundle/Contents/Resources/ and you can check it out in all its Quick Look glory below. 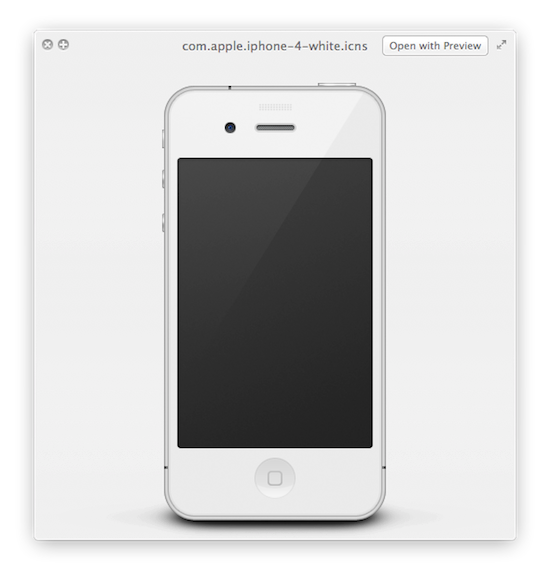 At this point, it sounds like the white iPhone will be released between April and May, likely before the WWDC where Apple is set to announce the next generation iPhone.