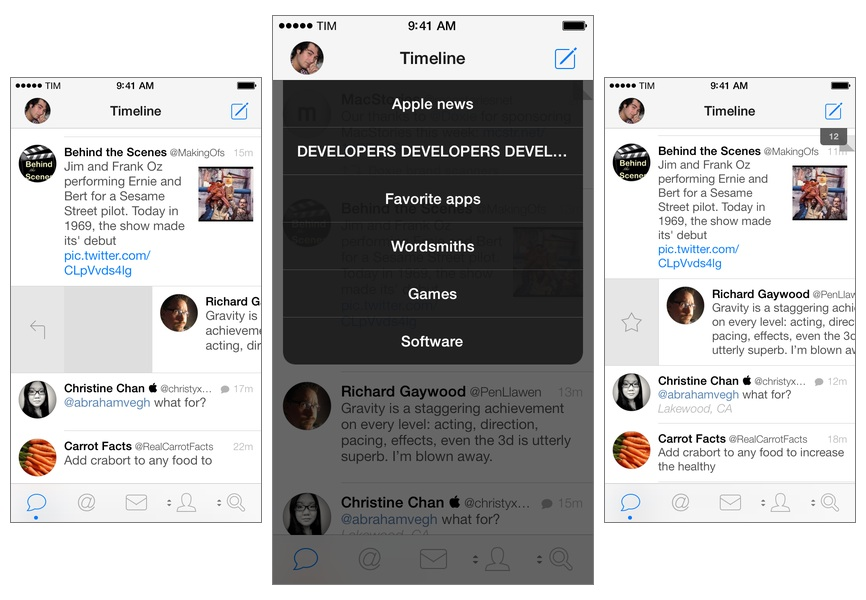 Tweetbot for iPhone may have grown up, but it hasn’t forgotten about the features and design decisions that made it a powerful and popular Twitter client among iOS users for the past two years. Tweetbot 3.1, available today on the App Store, improves upon last month’s major release by bringing back some old features of Tweetbot 2.x and introducing new ones, always taking advantage of iOS 7’s design and structure in interesting ways.

The possibility to turn the main timeline tab into a Twitter list has always been one of Tweetbot’s unique features. Here’s how I described it in my review of Tweetbot 1.0 two years ago:

Let’s say I want to temporarily switch to a timeline based on a list collecting people that tweet about RIM: I tap on the timeline button, select the list, and there my main timeline is replaced by the RIM folks. I can go back at any time, choose lists — even create new ones and add users to them thanks to Tweetbot’s full list management. Other Twitter clients in the past tried to play around with this concept of turning lists into timelines, but none of them got close to today’s implementation in Tweetbot. It’s simple, fun, and adds value to my productivity.

(I can’t remember why I used RIM as an example. I’m going to retroactively state it was a joke.) 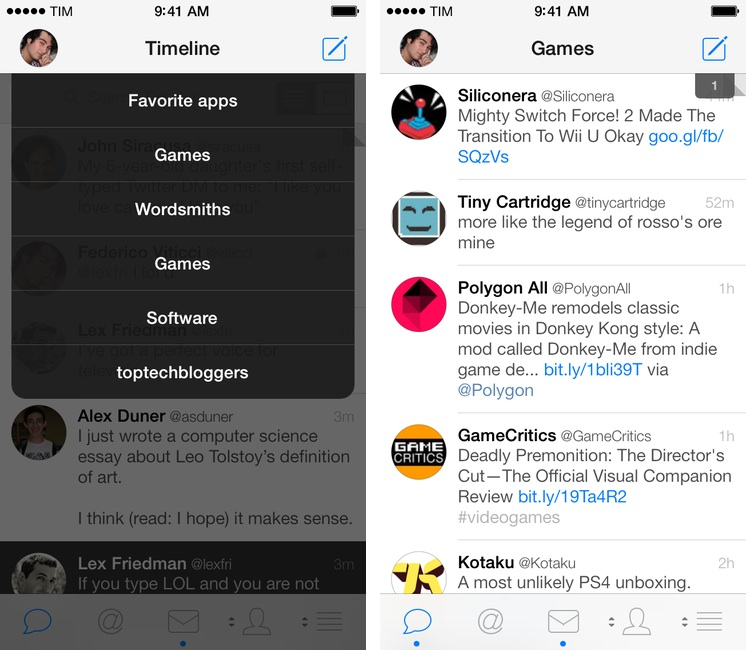 The timeline switcher had to be cut to ship Tweetbot 3.0, but it’s back in version 3.1 with a new design that matches Tweetbot’s lighter new style. To activate the switcher, tap & hold the “Timeline” text in the title bar of the Timeline tab: a translucent popup will fall off the top of screen, quickly springing back to show you lists you can view in the timeline tab (either because you’ve created those lists or subscribed to them). Once you’re in a list, you can tap & hold again at any time to bring up the switcher and go back to the timeline. Like the old app, Tweetbot 3.1 keeps separate scrolling positions for your timeline and lists; if you’re not seeing all your lists in the popup, it’s because you have to scroll it.

I don’t use lists much, but I’m glad the switcher is back. I am subscribed to a bunch of lists and created some for myself – I tend to open an “Apple News” list every couple of days, and my “Games” one every morning. The timeline switcher makes it easier to open lists and it fits with Tweetbot 3’s design.

For the release of version 3.0, Tapbots decided to eschew in-app text size controls to embrace Dynamic Type, an iOS 7 feature that controls the size of text at a system-wide level in every app on your device that supports it. While I liked the convenience of Dynamic Type (I can set font size once and forget about it), several users didn’t like the fact that there were no options to make Tweetbot’s text look different than other iOS 7 apps. That’s the trade-off with Dynamic Type: unless a developer implements a fallback option for users who don’t like it, you’ll be stuck with having the same font size in all your apps. 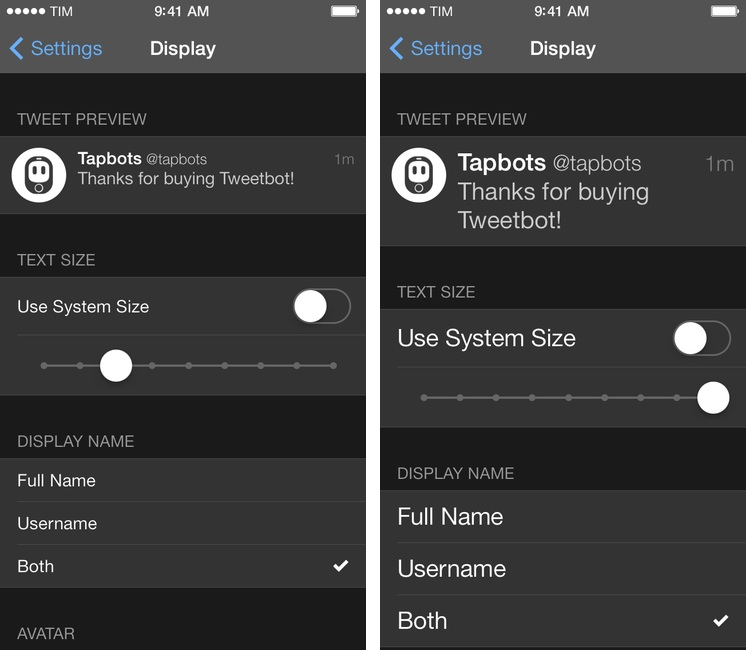 With Tweetbot 3.1, you can turn off Dynamic Type and choose your favorite text size for the app. Available in the app’s Settings under Display, the new text size controls mostly mimic Apple’s default sizes but they don’t depend on it.

There’s also a handy Tweet Preview box at the top of the screen to show you what a tweet would look like with the current text size settings. There are nine size points to choose from, which should be enough for most users who don’t want Dynamic Type.

I wasn’t the biggest fan of Tweetbot 3’s gesture to open a tweet’s detail view:

I’m still not sure on how I feel about the dark detail view and the gesture to open it. In Tweetbot 2, swiping to the left would quickly switch from the timeline to the Detail view with a seameless transition accompanied by a sound effect. In Tweetbot 3, as you swipe left an icon with three dots is progressively revealed next to a tweet and, if you keep swiping, the entire cell is pushed to the side by a color block, which then disappers to show the Detail view. I was a fan of the old Tweetbot’s transition, and I think that the new one feels unfinished, unnecessary, and slow.

Tapbots’ choice makes more sense now that Tweetbot comes with configurable quick actions through a right swipe that is designed after the left swipe of Tweetbot 3.0.

In the new version, you can quickly swipe a tweet to the right to reply to it. As you swipe quickly, a reply button appears on the left and the tweet cell is pushed to the right – just like the three dots and the detail view in Tweetbot 3.0. If you reply to tweets often, this is a nice time-saving addition.

A quick visit to the Settings reveals, however, an option for “short right swipe” that can be configured to quickly faving or retweeting a tweet (with inline feedback as you do so). Essentially, Tapbots has built two quick actions into a single swipe gesture: the first one, quick reply, is the default “fast” one, whereas the custom action is a deliberate option in that you have to intentionally perform a short swipe to activate it. 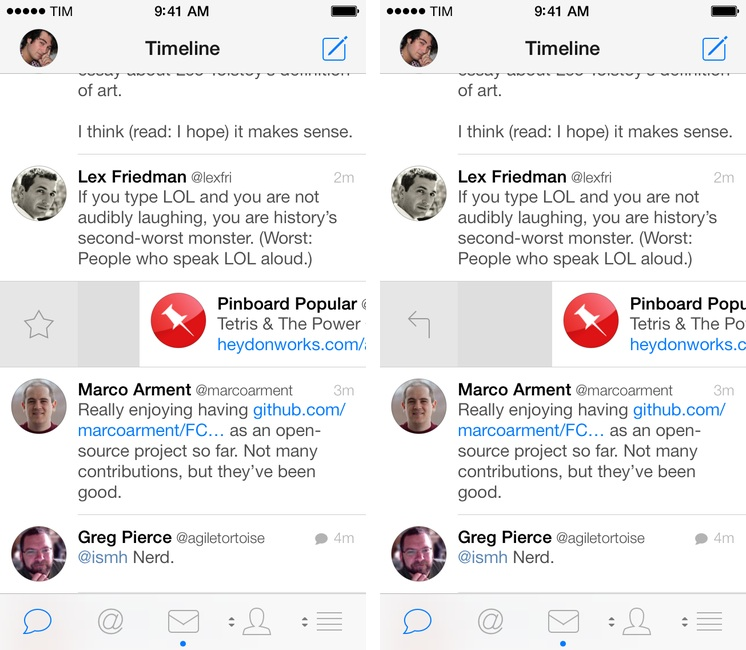 It’s a clever implementation: in apps like Mailbox and Dispatch, there is a certain level of awkwardness when you have to perform a swipe long enough to trigger an action that’s bound to the length of the swipe. In Tweetbot 3.1, the long swipe doesn’t need to be looked after – it’s the one you quickly perform on a tweet you want to reply to. If you want to fave or RT, there is enough distance between the activation zone for quick swipe and normal swipe to ensure a smooth experience. I didn’t like this gesture initially, so I’d suggest giving it some time.

I feel like there’s an untapped potential for quick swipes. Besides the obvious quick reply, fave, and RT shortcuts, it’d be nice to have sharing options available as quick actions – I’m thinking of stuff like Mail and Messages sharing, and perhaps integration with bookmarking services too. Tweetbot has always been about being more productive and efficient in the timeline, so more quick actions would make sense.

There are other minor changes in Tweetbot 3.1 worth a mention as well.

If you don’t like round avatars and want to go back to the old days, you can activate square avatars in the Settings. I don’t like them, but I guess some people will always be nostalgic. 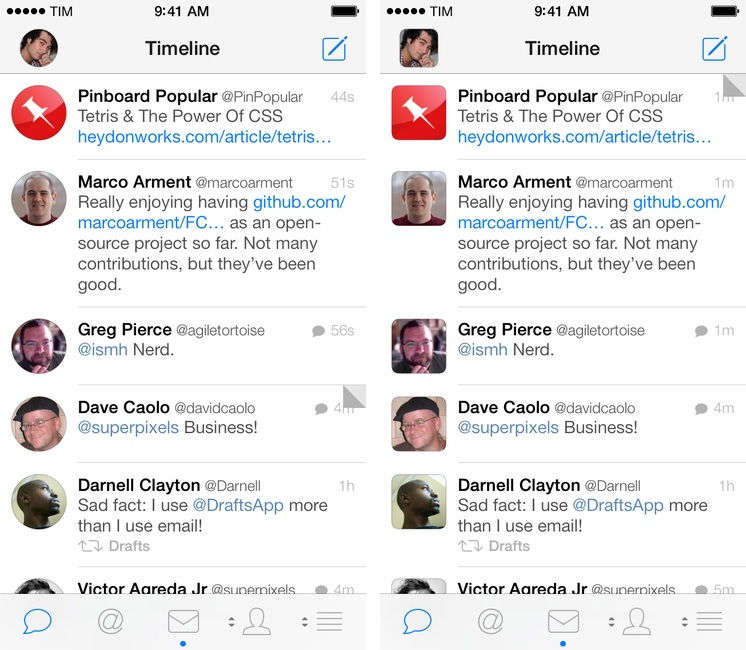 Alongside bug fixes, conversations can now be emailed or shared through Storify again, and a “Last tweet x minutes ago” status is back under a user’s profile. In timelines, the “Retweeted by” text string has been removed, leaving room for just the icon and username in retweets.

Tweetbot 3.1 is an iterative udpate that re-introduces old features and quick actions that are useful and show potential for futher development in the future. You can get the update on the App Store.