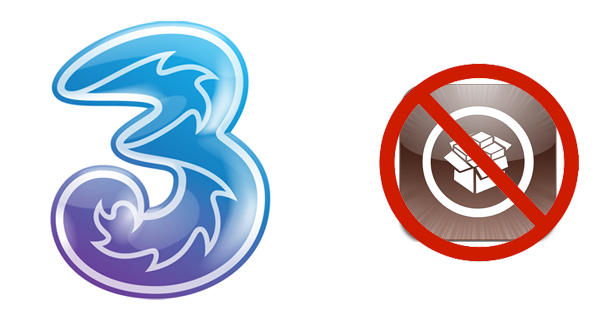 Customers of Three in Ireland and the UK might wake up today with a little bit of a shock when they hear that Cydia has seemingly been blocked by the carrier, leading those who jailbreak their iOS devices unable to access certain content from Cydia when on the Three network. The block seems to be for Cydia’s servers so whilst the main page is inaccessible, Three users in the UK and Ireland should still be able to access other repositories and download from them.

Three is of course unable to block what you access when you are on WiFi networks so Cydia remains fully functional when using such networks, it is only when on Three’s 3G network that Cydia’s servers are inaccessible. It is unknown why Three has blocked Cydia’s servers from their network or if it was entirely intentional. Some have suggested Apple could be behind this, but it seems an unlikely move by Apple because this ban is very ineffective and limited, leaving Cydia completely accessible from a WiFi network and on other carriers in the UK and around the world.

Three UK have been contacted for comment, but as of the time of writing, no response has been received. This post will be updated when such a response is received.