The white iPhone 4 has become some sort of unicorn amongstApple devices: where is it? It should have been available by launch, then it was delayed, and delayed again, and delayed again. We heard rumors about Apple facing issues with Chinese manufacturers (light leaking out of the metal band) and we also heard that, anyway, Apple should have the white model ready “later this year”.

Basing on a recent Steve Jobs email iPhoneDownloadBlog has received, it seems like Steve is indeed confirming the availability for Christmas.

Hello Steve, My name is Nathan, I’m a high school student from San Bernardino. I also happen to be one of your biggest fan and a total Apple fanboy and proud to be.
I’ve been saving up money to buy the new iphone 4. I want the white one but Apple said it won’t be available until later this year. I know you must be asked this question hundreds of times a day but do you think we can expect to get the white iphone for xmas?
I hope you can answer. Thank you Steve.

And allegedly got this reply:

Christmas is later this year. 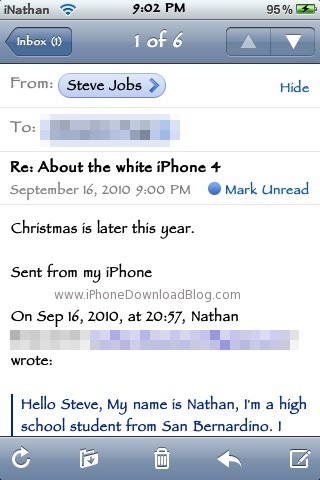 As usual with these unverified emails, we can’t completely trust the source. But it sounds very likely to me: a highly demanded model released by Christmas in the States? Cash.

And more cash. We’ll see. In the meantime, you can always consider Engadget’s mod.