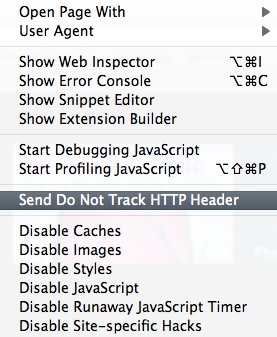 As noted by The Wall Street Journal, Apple has enabled an option in the latest developer build of OS X Lion (Developer Preview 2 was released two weeks ago) to activate “Do Not Track”, an open project by Mozilla to prevent advertisers and other web companies from tracking you online.

Apple Inc. has added a do-not-track privacy tool to a test version of its latest Web browser for keeping peoples’ online activities from being monitored by marketers.

The tool is included within the latest test release of Lion, a new version of Apple’s Mac OS X operating system that’s currently available only to developers. The final version of the operating system is scheduled to be released to the public this summer. Mentions of the do-not-track feature in Apple’s Safari browser began to appear recently in online discussion forums and on Twitter.

Already offered by Internet Explorer 9 and Firefox 4, “Do Not Track” can be enabled or disabled by a user at any time; the service will then tell advertisers, web app or companies to stop tracking your movements online and, in a typical scenario, won’t serve “targeted ads” anymore to the browser. The new option hasn’t been given a standalone preference panel in Safari 5.1 yet, but it’s very likely that there will be one come the final release of Lion this summer. Right now, developers can activate the option from the Develop -> Send Do Not Track HTTP Header.