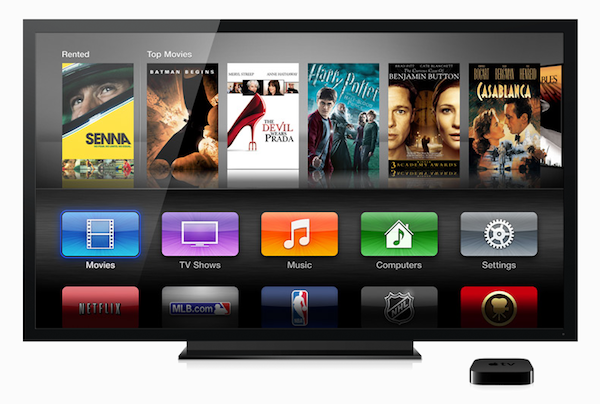 Alongside a hardware update that supports 1080p playback, the new Apple TV introduced a brand new grid-like interface that draws upon influences from iOS. Where previous Apple TV interfaces were more or less clickwheel-iPod inspired, the new interface replaces sleek and jewel-like menus for a series of colorful icons that provide quick menu access to Netflix, TV Shows, and MLB.TV just to name a few. However, the interface is now at the center of brief controversy around Apple’s design decisions and the absence of Steve Jobs.

@aral Fun fact - those new designs were tossed out 5 years ago because SJ didn’t like them. Now there is nobody to say “no” to bad design.

Schnell then asks the question that any worried Apple fan would ask,

The question now is, who’s calling the UI shots at Apple these days? Are things slipping a little bit?

I’ll save my comments regarding if this is the case below. As of this morning, Margolis’ statements have of course picked up steam on the Internet and make for juicy headlines relating to Apple’s change of course since Steve Job’s departure as CEO. After Matt Brian picked up on the story at The Next Web, Margolis left a comment providing the story’s context.

Correction: I was telling @aral that AppleTV was not designed by Ive, it was designed by one (very talented) designer in the consumer apps team. I was not implying the consumer apps team only had one designer. Most of the AppleTV UI remains unchanged since AppleTV “Take 2” and I think that’s a testament to how good it was. Great design is timeless.

The new UI shouldn’t come as a surprise to anyone. There is a clear effort at Apple to make everything match the look and feel of their popular iOS products - starting with Lion and increasing momentum with Mountain Lion.

To be clear - [Steve Jobs] didn’t like the original grid. This was before the iPhone was popular and before the iPad even existed.

Given that the iPad is far more successful than the AppleTV, migrating the AppleTV to look more like the iPad was probably a very smart move - even if some of the users of the old UI don’t prefer the new one.

The full conversation that has sparked much debate in the Apple community and the followup to Brian’s article have been saved via Storify and embedded below.

The story that’s being presented by much of the tech press is that Steve Jobs wouldn’t have approved of the current interface design. This isn’t necessarily a bad story to tell, but it is misleading, and it becomes easier to get page views when it’s morphed into a story about how Apple is losing their focus without Jobs at the helm. If we take Phil Schiller’s quote into consideration about how, “We’re starting to do some things differently,” it’s not hard to see why the tech media would latch on to a story like this.

The conversation above is interesting because it gives a brief glimpse into the history of the Apple TV, but otherwise it’s simply a conversation regarding a designer’s distaste for an interface not optimized for the television. Aral Balkan writes on Twitter:

Even though I understand the unification efforts, the new Apple TV UI is a case study in how not to do it… — Aral Balkan (@aral) March 24, 2012

There’s always going to be criticism, good or bad, about the decisions Apple makes concerning their products. They are a closely watched company who appeal to and draw lots of attention from interface designers and usability experts.

The current line of thinking is that Apple’s recent successes will only be because of some path or plan Steve Jobs left the company before his departure. I maintain that the current team of executives running Apple will make decisions that directly benefit their products and the people who buy them (just as Apple always has). Steve Jobs might not be around to say “no,” but I’m positive that Apple is careful to hire people imbued with Apple’s design principles. The recent interface update to the Apple is a sign of the times, mainly a sign of the company’s success with iOS. It’s way too soon to tell whether Apple is losing their focus when it comes to good design, and I don’t think an Apple TV update will show that. In the Apple of today, current interests in iOS are simply permeating through all of their products and design.

[via Macgasm and The Next Web]