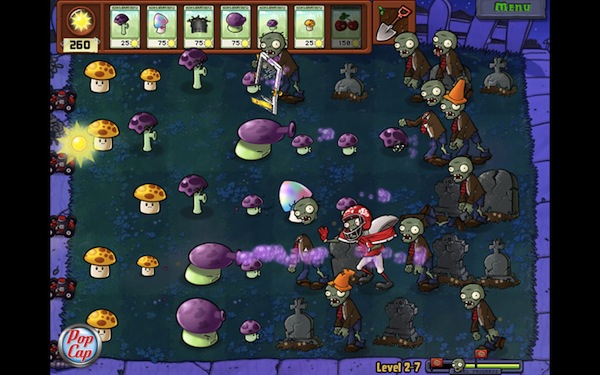 While we’re still waiting for Bejeweled 3 to become available on the iPhone and iPad, PopCap Games has released its hugely popular “Plants vs. Zombies” in the Mac App Store. You can find it here at $9.99.

The game, successful on the iOS App Store and firmly positioned in the first spots of the paid software charts, looks like a straight port of the iPad version, made bigger to run on every Mac’s screen. That means you’ll find the 49 zombie-killing plants you know and love, 26 different types of zombies to block from accessing your house and all the strategies and skills you’ve already implemented on the iOS platform. The game, for those unaware of its addictiveness, revolves around the concept of killing a horde of zombies marching towards your property using only seeds, powders and bombs released by…plants. Colorful graphics and funny sound effects, together with a great gameplay, made this game an absolute must-have for iPhone and iPad owners.

Perhaps Plants vs. Zombies for Mac won’t generate the same sales numbers of the iOS counterpart, but if Angry Birds is of any indication – it really looks like users are willing to pay again to play their favorite iPhone games on OS X. Go download the game here, and don’t forget to play The Cranberries’ “Zombie” every once in a while. Just to get in the right mood.