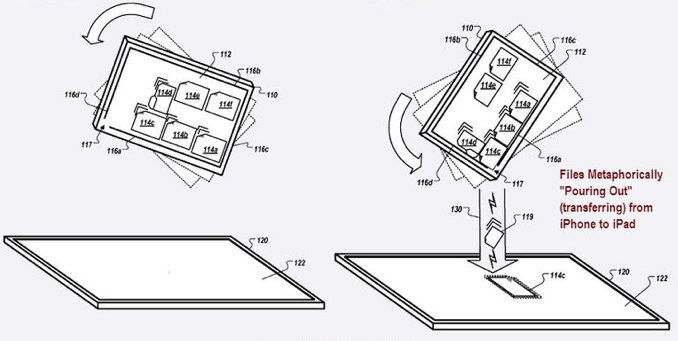 A new patent detailed by Patently Apple today illustrates how Apple may implement file sharing between iOS devices in future versions of the iPhone and iPad. Whilst patent filings are no indication of features and hardware design choices coming in the next versions of operating systems and devices, they provide some sort of insight into what Apple engineers and designers have been researching to improve the technology or user experience. This latest patent offers a (possible) interesting solution to a common problem that have always affected owners of multiple iOS devices: it’s not easy to share files between them wirelessly, without a cable, without a computer. Whereas iCloud and the PC-Free initiative will focus on fixing this by cutting the cable requirement and constantly syncing documents between apps both on iOS and OS X, there are still some use cases in which a user might want to share a file quickly without uploading to iCloud first. Or, then again, owners of different devices with different iCloud accounts might find difficult to share files in seconds without having to rely on classic email or social sharing.

The patent details a technology that is capable of beaming files back and forth between devices thanks to “file sharing gestures” such as the “pouring motion” or regular flicks and swipes that will give users the illusion of throwing files off a screen, and onto a second device. With sound effects (Patently Apple reports the “vacuum cleaner” one) and animations, this new system sounds like an evolution of webOS’ existing “Touch to Share” feature that allows smartphones and the TouchPad to share, for example, webpages by simply touching each other’s screen. Apple’s proposed solution takes this idea a step further with the concept of animations, user gestures and file selection in-app to give users more control and “personality” over what’s being shared, and how.

Apple’s solution begins by stating that a user could make an intuitive, physical gesture with a first device, which could then be detected by one or more onboard motion sensors. The detected motion triggers an animation having a “physics metaphor,” where the object appears to react to forces in a real world, physical environment.

Apple’s patent spends a lot of time describing various animated physics metaphors that would have the iOS device’s interface react differently depending on the metaphor. Apple describes that the appearance of the interface could react to gravity, friction or drag, momentum, torque, acceleration, centripetal forces or any other force found in the real-world physical environment. The rate at which each object moves on an interface could be based on the size or “mass” of the file represented by the object. Larger files that have more “mass” could have their object animated to move slower in the interface while smaller files that have less “mass” could have their object animated to move faster in the interface.

The patent also details scenarios such as having iOS devices at work or school, and having to share files with colleagues or friends. The proposed system could scan for available iOS devices, and let users to exchange files with simple gestures. The concept reminds us of AirDrop, a new feature of OS X Lion that enables Mac owners to share files with computers nearby, provided they’ve granted authorization for incoming documents.

Last, the filings detail how these new file sharing features and commands could also be used to send files to a network, rather than a device. It is unclear from the report whether this patent is based off Apple’s rumored interest in NFC technology (admittedly, this sounds a lot like it), so make sure to hit Patently Apple to check out all the details and illustrations.