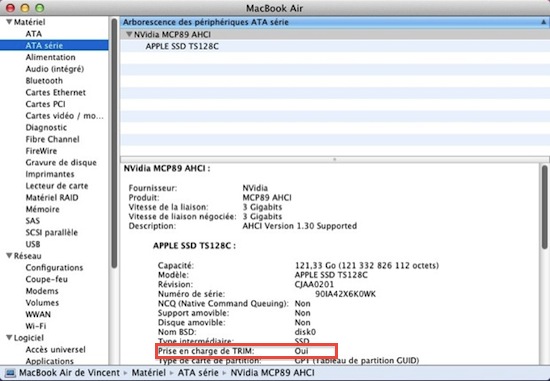 Here’s some great news for SSD owners like me (on a 2008 unibody MacBook Pro) or people that bought a new shiny MacBook Air with integrated Flash storage earlier this year: the developer beta of Mac OS X Lion adds support for the TRIM command on SSD. As you can see in the screenshot above captured by MacGeneration, there’s a “Oui” (yes) next to TRIM command info.

What’s the big deal with TRIM support? To put it simply, operating systems like Snow Leopard that don’t have TRIM support will treat solid state drives as regular, spinning drives when writing and deleting blocks of data. Snow Leopard doesn’t exactly know it’s dealing with an SSD, and while you’ll notice incredible performance improvements in daily usage, the same performances will slowly degrade over time without TRIM support. TRIM correctly tells the operating system which blocks of data are no longer in use in the solid state unit, and the OS passes the information along to the SSD controller so it can wipe blocks internally.

Basically: this is great news for SSD aficionados and, looking forward, a smart move from Apple as the move to solid state drives in all Mac computers seems inevitable.