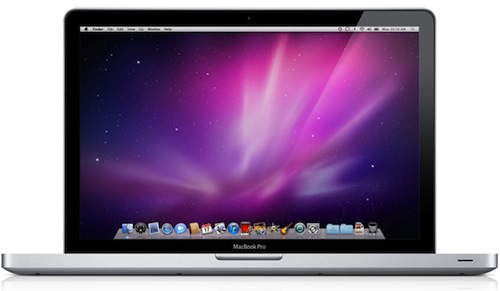 The new MacBook Pros are approaching the rumored February 24th release date, with several retailers sold out  and various Apple online stores reporting shipments within 3-5 business days – a timeframe that plays very well with the Thursday, Feb. 24th rumors. BGR has posted some interesting details on the new models, which will come in five different SKUs as previously reported and will be lighter at around a half-pound less than the current generation. BGR also claims the new MBPs will have bigger glass trackpads.

The curious tidbit, however, is about a hard drive / SSD combo that would allow the new MacBook Pros to store the OS on the faster solid state disks and load everything else straight off the regular (and perhaps very large in capacity) drive:

The next bit of information doesn’t quite make sense to us, but we have been told the OS on the laptops will be loaded to a separate (internal) 8-16GB SSD while everything else will remain on the regular hard drive. There will be options for just SSD drives but the base models will feature regular hard disks with the SSD combo for the OS.

The rumor is interesting because it replicates what many users have been doing over the years to achieve a faster OS and still manage to store hundreds of GBs of media on their computers: install the OS on a small internal SSD, offload media and apps on a second internal (spinning) hard drive. It’s not a full SSD setup, but it has worked well for thousands of Mac users in the past years.

Does this make sense to you? Personally, I think I will go with the single (and more expensive) SSD option, but this could be a good move to introduce SSD in the MacBook Pros without increasing costs for the base models and yet provide a full-featured SSD option for those who want the speed and efficiency of solid state.