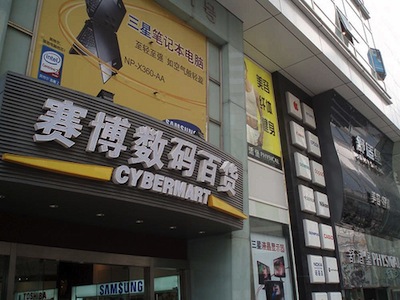 As if Apple wasn’t having enough of a success in Greater China (the area that includes China, Hong Kong and Taiwan), Digitimes is now reporting that Cybermart International, a major Chinese retail chain which is part of Foxconn, has gained the status of “first-grade distributor” for Apple’s products. The plan? Open 500 new licensed stores.

Cybermart plans to set up 500 Apple licensed retail shops in China, Hong Kong and Taiwan, according to company chairman Steve Chang. The first store will be opened in Tianjin on April 1, 2011.

This is an impressive number that will sure help increasing the popularity and visibility of Apple’s computers and mobile devices in the area. At the Q1 earnings call on January 18, Apple announced revenue in Greater China was $2.6 billion, up 4 times from the year-ago quarter. Four stores in China reported the highest traffic and highest revenue.

While authorized resellers don’t offer the same experience of an Apple Store, they sure help bringing products to the attention of consumers that live in areas where Apple Store are nowhere to be seen. And for Greater China, 500 new licensed stores sound like a good move.