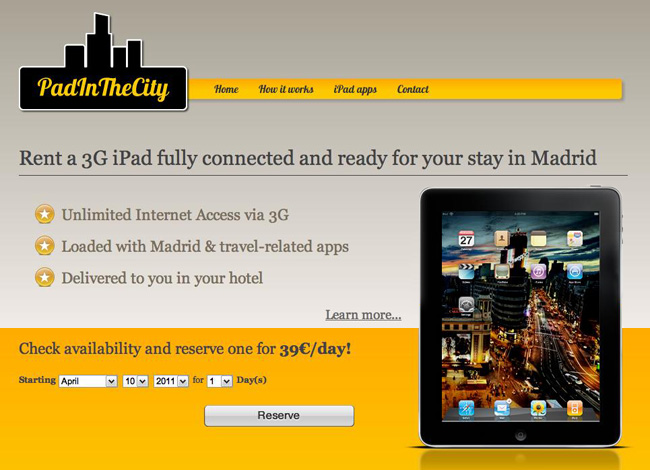 If you’re on a vacation in Madrid, Spain and don’t have your 3G iPad, why not rent one? This sounds like a great idea and PadInTheCity has developed a new service that lets you rent a 3G iPad pre-installed with tourism and business apps. For $55 (€39 in Madrid) per day, a tourist (or anyone that doesn’t have an iPad) can rent a 3G iPad with unlimited data.

PadInTheCity arranges the rentals through their site. Enter the dates that you will be in Madrid to check for availability, enter your credentials then you’re ready. The payment system is through PayPal, so people will already feel comfortable making a transaction this way as opposed to using a credit card in a foreign country. PadInTheCity does put a $708 (€500) hold in case the iPad is not returned though.

They will deliver the iPad to your hotel, the airport or train station - wherever you like - and also bring a case and charger for use. You now have a fully equipped 3G iPad with apps to help you get around the city like news, maps, radio, tourism apps, wikipedia and even Angry Birds. Once you return the device, they unblock the €500 credit card hold.

PadInTheCity is a great idea, it’s like a tourist guide that fits in your travel bag and without the difficult accent! More cities around the world should encompass this idea, what a great idea.

[via Cult of Mac]