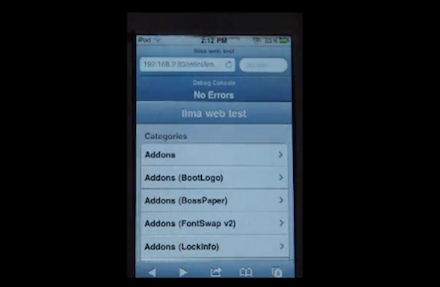 With 1.5 million users logging into the app every day and an estimated user base of 10 - 15 million iPhone, iPad and iPod touch users, Cydia has become the undiscussed leader of the jailbreak community thanks to the thousands of tweaks and utilities available for download and purchase. Developed as an alternative to the App Store to find a place for those apps that Apple would never approve, Cydia turned into a full-featured marketplace where users can go to find the latest modification to the iPhone’s graphic files, or hacks to enable functionalities that Apple left out in the last software update. Cydia is the single reason to jailbreak an iOS device, but some developers think there’s still room for healthy competition and fresh new concepts in the jailbreak scene.

Lima, created by the same folks behind the Icy package installer, is a new browser-based Cydia alternative that’s still in the early stages of development but will be focused on speed, reliability and ease of use. Instead of building an app package, the devs of Lima opted for the browser option: Lima will likely gets its own homepage, and let users log in with their online accounts to download and install tweaks. It’s unclear whether Lima will allow users to add custom sources and how many developers will support the platform once it’s available, but devs weighing in iPhoneDownloadBlog’s original coverage seem to confirm that Lima will offer an option to manage repositories, as well as a backup system for installed packages.

You can follow the development of Lima on the Infini Dev Team’s blog, and check out the first demo video below.