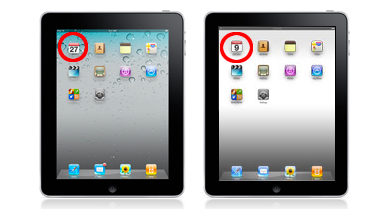 In case you didn’t know, Apple’s icons are full of secrets. From the Maps icon to the Mail one, they come with references to internal Cupertino jokes the average consumer may or may not understand by looking at a simple graphic file. But sometimes, the reference is obvious.

Take the alleged “iPad 2 Springboard” preview image found in the iOS 4.3 beta: it shows the Camera, FaceTime and Photo Booth icons, but it also comes with an updated calendar icon. Which, unlike the calendar icon used in promo material for the iPad 1, doesn’t have a 27. But why does the calendar app on the original iPad have a 27 on it? Because the device was announced on January 27th, 2010. See the reference?

On this new preview image, the number is 9. The updated icon may or may not suggest that the iPad 2 will be announced on, say, February 9? That’s a Wednesday, and it would be two months before the rumored April 9 release date. This would give Apple a 60-day timeframe to announce the device and get developers ready with their apps.

If Apple doesn’t change the icon again in the next weeks, there’s a good chance we’ll have an iPad 2 announcement on February 9. At least, we hope so. What do you think? [via Shimanke]

Update: Too bad the same “Calendar 9” icon can be found in the current iPad under Settings, Brightness & Wallpaper. We wanted to believe.