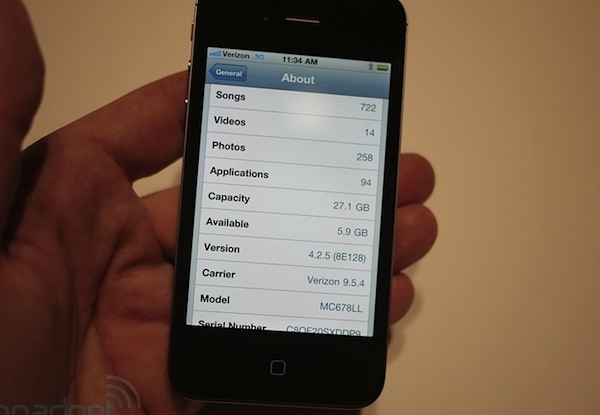 Here’s another interesting tidbit coming from the first hands-on with the just announced Verizon iPhone, which, as you may know, happens to be a regular iPhone 4 running on CDMA.

The Personal Hotspot functionality is located in the Settings app, as noted by Engadget. That lead the Engadget folks to wonder if the unit was running a new firmware and, indeed, the Verizon iPhone they’re testing now is running iOS 4.2.5. Probably, it’s a simple update to iOS 4.2 to make it compatible with Verizon’s chip and enable the hotspot functionality.

A major iOS update that includes the “iTunes app subscriptions” system is expected to be released soon together with Murdoch’s iPad app “The Daily”, but we really don’t know about this iOS 4.2.5. Guess it’ll just ship by default on every Verizon iPhone on February 10?