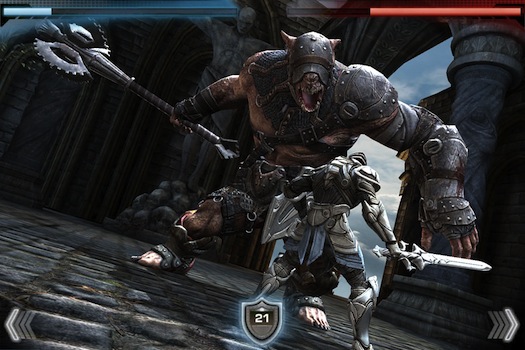 Ever since Epic Games introduced Infinity Blade as Project Sword at Apple’s Worldwide Developer’s Conference in 2010, ChAIR Entertainment (subsidiary of Epic Games) has received remarkable attention for promising then delivering a gaming experience that pushes Apple’s latest hardware to its limits. After Infinity Blade was officially titled in November, 2010, and released for the masses a month later, the game sold 274,000 copies in the first five days — $1.6 Million in net revenue is impressive even for a highly anticipated gaming title. A year later, Infinity Blade II has hit the market after another impressive tech demo, earning $5 million in revenue since its December 1st launch. The original Infinity Blade took three months to reach the $5 million marker and has earned Epic Games $23 million to date.

You can find the Press Release past the break.

CARY, N.C. and SALT LAKE CITY (January 5, 2012) – Epic Games, Inc. and its award-winning Salt Lake City-based development studio, ChAIR Entertainment, today announced that earnings from ChAIR’s blockbuster Infinity Blade video game franchise have eclipsed $30 million in just one year since the introduction of the original game. One of the most popular gaming franchises to be launched on the App Store, the award-winning series has also created significant licensing interest in the underlying Unreal Engine 3 technology from developers worldwide.

“The success of the Infinity Blade franchise is testament to our talented team who is devoted to making games we want to play, all while using Unreal Engine technology to redefine what is expected from games on iOS devices,” Epic Games President Dr. Michael Capps said. “We have so much more in store for players, and will continue to make great content for Apple’s evolving platforms.”

Infinity Blade II is available for download from the App Store (www.itunes.com/appstore) for $6.99 and is a universal app. The game is compatible with iPhone 3GS, iPhone 4, iPhone 4S, iPad, iPad 2, iPod touch 3 (16GB+) and iPod touch 4.

In December 2010, Epic Games’ award-winning studio ChAIR Entertainment forever changed the landscape of mobile gaming with the introduction of “Infinity Blade” for iOS. Powered by Unreal Engine 3, “Infinity Blade” brought handheld gaming to new heights with gorgeous visuals, adrenaline-fueled battles and advanced character progression in a fully 3D castle realm. With millions of players worldwide, “Infinity Blade” is one of the most popular games ever launched on the App Store, receiving numerous Editor’s Choice and Game of the Year accolades, as well as the “Excellence in Design” Award at the 2011 International Mobile Game Awards and the prestigious 2011 Apple Design Award. The award-winning sequel, Infinity Blade II, was successfully launched in Dec. 2011 and remains one of the most-popular, best-reviewed games on the App Store.

Founded in 2005, Salt Lake City-based ChAIR Entertainment is a subsidiary of Epic Games, Inc. Most recently, ChAIR introduced the award-winning sword fighting adventure, “Infinity Blade II” for iOS, in December 2011. Following in the footsteps of the original Infinity Blade, the critically acclaimed sequel continued on to win numerous Game of the Year and Editor’s Choice accolades and became one of the most popular games of 2011. In 2009, ChAIR released the modern and masterful, side-scrolling shooter “Shadow Complex,” published by Microsoft Game Studios exclusively for Xbox LIVE Arcade. The critically acclaimed “Shadow Complex” received numerous E3 and Editor’s Choice Awards and was named Game of the Year by more than 40 media outlets. Before that, ChAIR released the award-winning underwater action-shooter, “Undertow” for Xbox LIVE Arcade. In 2011, ChAIR was named #4 among Pocket Gamer’s list of the Top 50 Developers and ranked #29 among Develop’s Top 100 Game Development Studios in the World. Follow @ChAIRGAMES on Twitter and “Like” ChAIR Entertainment Group on Facebook.

Epic Games, Inc., based in Cary, NC and established in 1991, develops cutting-edge games and cross-platform game engine technology. The company has created multiple million-selling, award-winning titles in its “Unreal” series, including “Unreal Tournament 3” for PC, PlayStation®3 and Xbox 360®. The first two games in Epic’s “Gears of War” franchise have sold more than 13 million copies and won more than 50 game of the year awards. The third installment, “Gears of War 3,” sold more than 3 million copies within its first week of release, catapulting the franchise beyond $1 billion in lifetime sales. Epic’s Unreal Engine 3 holds more than 20 industry technology awards and powers many bestselling games. Additional information about Epic can be obtained at www.epicgames.com.