iBooks was one of the most obvious examples of an app that made sense in Apple’s pre-iOS 7 world, when metaphors for describing real world objects were king. You had a shelf full of books, highlighting that looked like it was drawn by hand, and page curl animations that mimicked the feeling of flipping through a real book. The app was warm and inviting, providing a sense that you were browsing the modern equivalent of an actual book.

Apple has been staggering a lot of updates post-iOS 7, focusing on core product suites like iWork and iLife, coming back to apps like Remote at later time. I figured an app like iBooks would need some preferential treatment, given its importance to Apple’s ecosystem, their focus on education, and the relevance of the iBooks Store in the digital age. It would have been perfect to have on hand during this September’s Keynote, but maybe it would have been too much to announce on stage at once.

iBooks 3.2 features a brand new design that follows in the footsteps of Newsstand, with gradient rows replacing wooden shelves, leaving covers to stand out on their own. While some might have deemed all of the previous textures distracting, it’s almost a shame to see all of the rich design in the app stripped away. It’s still largely the same app as before, but it’s just been reduced to generic iOS 7-isms we’re all familiar with by now: textual buttons, straightened lines, and outline icons. 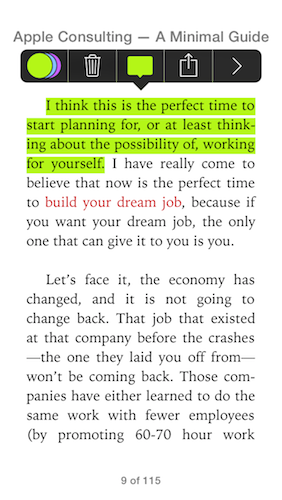 What’s gone is the charm — the new iBooks is strictly all business. Highlighting no longer has that ink-on-paper look to it, nor does inserting a note resemble a sticky or Post-it note. The app has received an iOS 7 inspired reskin, but what’s Apple doing to really show off this design’s potential? Developers such as Tapbots are taking iOS 7 design much further with apps like Tweetbot 3.

There’s also an update for iTunes U which is similar in design, using the same design language to describe courses and content.

iBooks and iTunes U are free updates from the App Store. Download them directly via the links below: