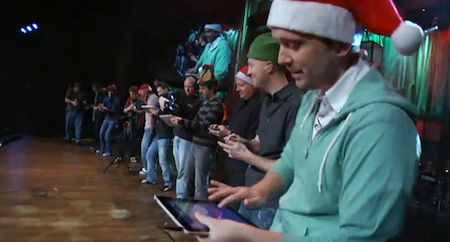 Here we are again, featuring a band that doesn’t make music with actual instruments, but decided to go the iOS way instead. The “iBand” from the North Point Community Church (website), indeed, played 3 Christmas songs (Carol of the Bells, Rockin’ Around the Christmas Tree and Feliz Navidad) using only iPhone and iPad apps.

The result, as you can see in the video embedded below, is fantastic. The songs turned out great when played through the apps, and the members of the iBand actually had fun when performing on stage all together. Crowd was cheering, the video is going viral on Youtube – all thanks to the power of quality music making apps released in the App Store these past two years.

Reid Greven from North Point writes on his personal blog:

Jared arranged “Rockin’ Around the Christmas Tree” and “Feliz Navidad” using the apps, and creating a demo by multitracking them in Apple’s Logic software (though any Digital Audio Workstation would do the trick).

Jared, Eddie Kirkland and I arranged the first song, “Carol of the Bells“. It’s amazing what you come up with when you sit in a room, hook 3 iPhones up to some speakers, and get adventurous!

The apps used in the performance include SoundGrid, Guitarist, iGog, Pianist and Percussions. Back in October we featured New York-based band Atomic Tom, performing a song using only iPhone apps.

Once again, I’m amazed by the results some people can accomplish by solely relying on modern Apple devices and applications. Check out the video below, then tweet it. It has to go viral.