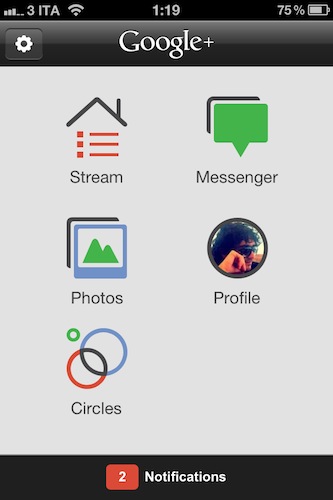 A major update to the official Google+ app for iOS has been released on the App Store, and it adds the features mentioned by Google earlier this week when the service hit official “beta” status (open to everyone) after a limited field-trial period. As previously announced by Google, the mobile app for iOS now comes with Hangouts support – meaning that you’ll be able to join a Hangout directly from your iPhone or iPod touch. I haven’t been able to test this yet as none of my friends is currently streaming a Hangout session, so I can’t comment on the app’s performances with video yet. When covering the functionality for the Android app, however, Google wrote:

In life we connect with others in all sorts of places, at all different times. And the connections you make unexpectedly are often the ones you remember the most. We think Hangouts should keep pace with how you socialize in the real-world, so today we’re launching it on the one device that’s always by your side: your mobile phone. To get started, simply find an active hangout in the Stream, and tap “Join”.

The most notable change as you fire up the updated app is Huddle, which has been renamed to Messenger and now supports photos. You can easily attach photos from your Library or snap new ones within a Messenger thread, and Google claims there have been some reliability improvements as well. 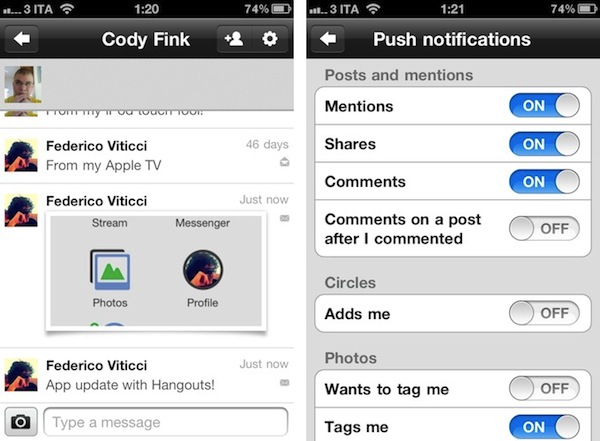 Throughout the app, I’ve spotted several optimizations that should make the mobile Google+ experience more enjoyable. For one, granular controls on notification settings now allow you to selectively receive push notifications for mentions, shares, comments, or comments on a post after you commented. You can also be notified about new people circling you, and new tags or comments on photos. Considering iOS 5’s upcoming Notification Center functionality, these changes should make for an optimal experience when dealing with the incoming stream of notifications from Google+. 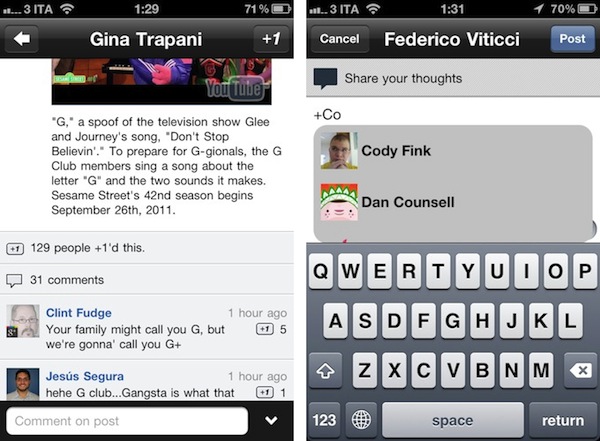 Other improvements in Google+ for iOS include the possibility to +1 comments, a map view in the profile for places you’ve lived, and a new feature to share posts with individuals only, instead of circles. Furthermore, Google mentions improvements to search in the changelog, and better support for +mentions (in the compose view, you’ll get a popup dialog to pick users, similar to Twitter).

The new Google+ update for iPhone feels like an important step forward in bringing the app up to parity with the website, as well as the mobile Android client. You can get it here on the App Store.

Update: I’ve run some first mobile Hangout tests, and performances seemed pretty reliably on my home network. Video quality was slightly worse than Apple’s FaceTime on the same connection, but it was a very slightly difference. What matters is that you’re able to join a Hangout directly from your stream as one of your friend starts it, and as you click “Join” you’ll be brought to a new dark screen that will load your camera view (front-facing by default), as well as your friend’s. There are notifications for new people joining a Hangout, and as multiple members join you can open a new screen to instantly add them to a circle.  There are buttons in a bottom toolbar to mute audio, freeze the camera, switch between front and rear-facing cameras, and leave the Hangout.

Overall, the process of joining a Hangout from my iPhone was pretty smooth, though on my friend’s end, she told me she was logged out at some time, and had to re-enter the Hangout. During those few seconds, I was left alone with a black screen as you can see in an image below. Hangouts on desktop web browsers have been recently enhanced with new features as you can read in Google’s blog post. 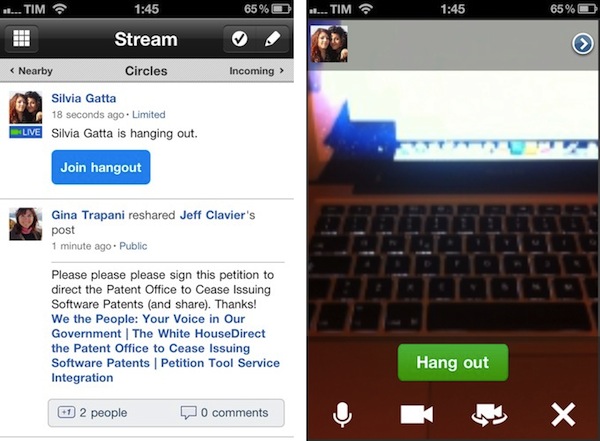 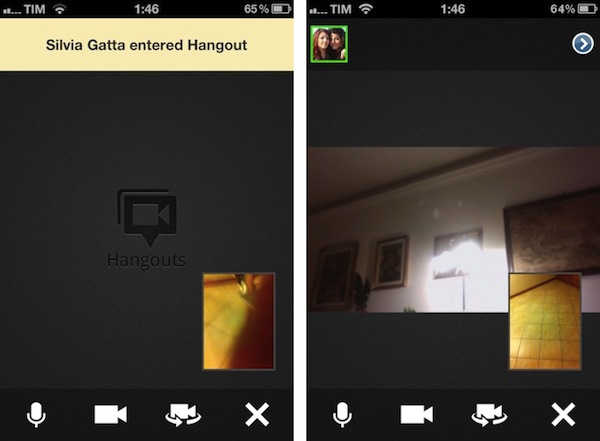