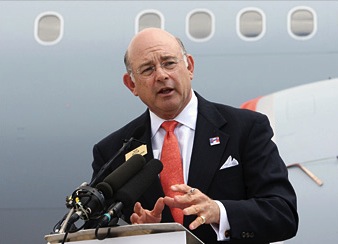 Today Apple appointed a new member of the Board of Directors: Ron Sugar, former CEO of Northrop Grumman Corp. “Dr. Sugar will serve as the Chair of the Audit and Finance Committee”, the press release reports. He takes the spot left by Jerry York, who passed away in March.

Steve Jobs is very happy about the decisions, as “Ron is an engineer at heart, who then became a very successful business leader” that has been involved in the development “of some very sophisticated technology.” Being Apple an engineering-driven company, it’s no surprise Ron Sugar is a new member of the Board of Directors. Press release follows below.

CUPERTINO, California—November 17, 2010—Apple® today announced that Dr. Ronald D. Sugar, former Chairman of the Board and CEO of Northrop Grumman Corporation, was appointed to Apple’s Board of Directors. Dr. Sugar will serve as the Chair of the Audit and Finance Committee.

“Ron is an engineer at heart, who then became a very successful business leader. We are very excited to welcome him to Apple’s Board,” said Steve Jobs, Apple’s CEO. “In addition to having been the CEO of a high-tech Fortune 100 company, Ron has a Ph.D. in engineering and has been involved in the development of some very sophisticated technology.”

“I have always had enormous admiration for the people of Apple,” said Sugar. “It is a special privilege to serve on the board of such an amazing company.”

Dr. Sugar served as Chairman and Chief Executive Officer at Northrop Grumman Corporation from 2003 until his retirement in 2010. Previous to Northrop, he held executive positions at Litton Industries and TRW Inc., where he served as chief financial officer.

He is a member of the National Academy of Engineering and a fellow of both the American Institute of Aeronautics and Astronautics and the Royal Aeronautical Society. He is a director of Chevron Corporation, Amgen Inc. and Air Lease Corporation, and serves as a senior advisor to the private investment firm Ares Management LLC.

He is a trustee of the University of Southern California, where he also holds the Judge Widney Chair as Professor of Management and Technology. He is a member of the boards of UCLA Anderson School of Management, the Los Angeles Philharmonic Orchestra and several other philanthropic organizations focused on children and education.