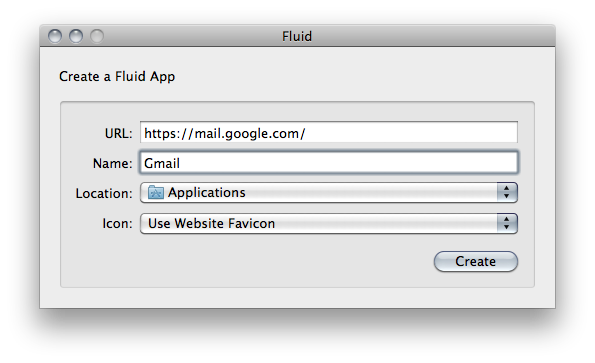 Fluid, the popular tool that allows you to turn websites into “native” Mac apps, was finally updated to version 1.0 yesterday after 3.5 years of development, bringing the app to “stable” status and introducing a new $4.99 price point that unlocks “extra features” – some of them previously available for free in the beta versions. For those who are not familiar with Fluid, it basically enables you to turn any website into a standalone desktop application that – technically speaking – is nothing but a Cocoa wrapper. By wrapping a website into its own desktop package, Fluid gives you the “illusion” of having a native Gmail or Facebook app while, in fact, you’re simply running a webpage into a separate window. Fluid, however, has got its very own perks, like the possibility to choose a custom Dock icon for a website, or displaying unread badges for new items and notifications – something that a browser normally doesn’t through tabs. In this way, Fluid becomes a pretty handy solution to put your Campfire chats in the Dock, or get Gmail out of the browser and into its own desktop window.

The new version 1.0, improvements and bug fixes aside, comes with an optional $4.99 purchase that will unlock three features: userscripts & userstyles, separate cookie storage, and possibility to “pin” apps to the OS X menubar. Whilst the first two features are self-explanatory (separate cookie storage is new to Fluid 1.0 though), “pin to status bar” is the big addition to this Fluid release. Much like Twitterrific and Twitter for Mac can be toggled by a menubar item to hide / show the main window, Fluid apps can now live in the menubar and get out of the way when you don’t need them. If you combine this with some clever mobile user agent tweaking, you end up with a sweet way to create useful iPhone-like desktop apps that don’t clutter your Mac’s screen, but they’re still there.

Fluid is not available in the Mac App Store, but you can download the free version here. A $4.99 license can also be purchased here with a Paypal payment.