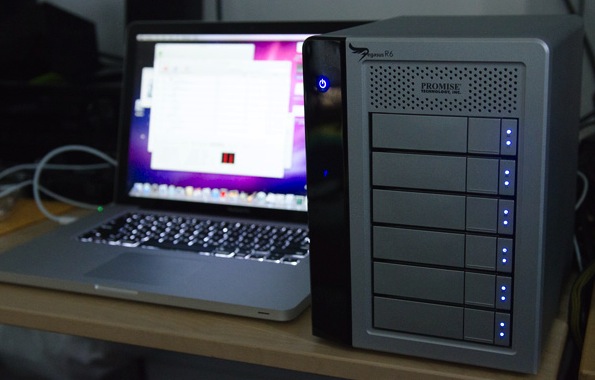 With the release of the official Thunderbolt cable from Apple earlier this week, the first Thunderbolt-enabled products also started appearing on the Apple online Store. As announced back in February soon after the introduction of the new MacBook Pros with Thunderbolt, Promise made available a set of four different RAID systems called Promise Pegasus R4 (4x1TB and 4x2TB configurations) and Promise Pegasus R6 (6x1TB and 6x2TB capacities). A few publications managed to get their hands on the newly released models and the first results are coming in, detailing how, indeed, the Thunderbolt technology is incredibly faster than regular USB 2.0, but also FireWire 400 and FireWire 800.

First off, AnandTech received a 6-bay 12 TB model of the Promise Pegasus and, whilst a full review will be available later this week, they have confirmed that booting OS X from an external Thunderbolt disk properly partitioned will be possible, unlike some reports in the past months suggested. Thanks to Thunderbolt’s high speed and possibility of daisy-chaining devices, it’ll be interesting to see how fast will Lion run when configured on an external (perhaps even SSD) drive with other peripherals connected.

All of the available Pegasus systems ship with 7200RPM 3.5” hard drives, although Promise mentioned that we will may see SSD enabled configurations in the future. The 12TB R6 we received uses six Hitachi Deskstar 7K3000 2TB drives (HDS723020BLA642) in a 9.7TB RAID-5 configuration. The 7K3000 spins its four platters at 7200RPM and buffers data with a 64MB on-board cache. The drive has a 6Gbps SATA interface although the Pegasus R4/R6 supports SAS drives as well. All of the Pegasus devices ship in RAID 5 however they do support RAID-0/1/5/50/6/10. 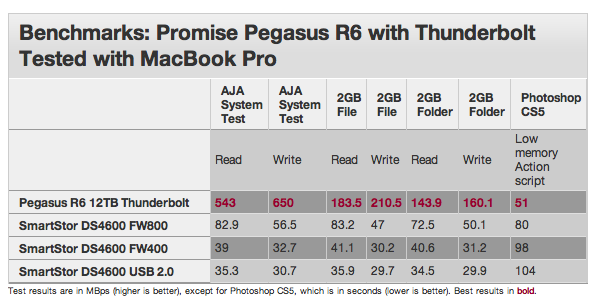 Similarly, Macworld received a Thunderbolt 6-bay 12TB Promise Pegasus RAID system and put it through a first round of tests to measure its speed against common standards like USB and FireWire. Unsurprisingly, Thunderbolt scored better reading times – between 6.8 and 11.5 times faster than a FireWire drive from Promise itself, while a copying process of a 2 GB file was 30 percent faster on the Thunderbolt-equipped R6.

When connected to the MacBook Pro (which has a slower processor than the iMac, but a faster internal SSD), we see that the R6’s AJA System Test results are very similar to the results when the R6 is attached to an iMac. In our tests involving the 2GB file and 2GB folder of files, the R6 benefited from the solid-state drive in the MacBook Pro. Across the board in these tests, the R6-MacBook Pro/SSD combination outperformed the R6 attached to an iMac with an internal hard drive.

More benchmarks will be available this week as people get their hands on new Thunderbolt products.