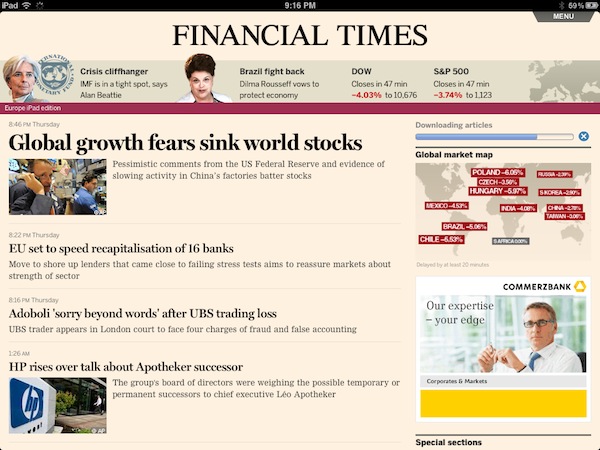 Reuters reports on the Financial Times’ web app’s performances, noting that the HTML5-optimized version of FT.com has now 700,000 users, proving it to be “more popular” than the newspaper’s iOS app. Financial Times made headlines when it couldn’t agree with Apple on iTunes’ subscription rules for publishers – which require companies to give a 30% revenue cut to Apple, and make sharing of subscriber data opt-in. It was previously reported that 50% of iTunes subscribers opted to share their personal information; however, the Financial Times wanted more control over its mobile application, and decided to develop an HTML5 version instead. The iOS app was then pulled from the App Store.

People who are using the app are spending much more time with the content,” he said. “They are consuming about three times as many pages through the app as they are through the desktop in an average visit.”

After launching the new web app on June 7, the Financial Times reported after three weeks they achieved 200,000 downloads, with 100,000 in the first week alone. In spite of its web app nature, the iOS-optimized FT app recommends users to “add it to their home screens”, requesting access to increased database size for local cache.

Apple has been doing a number of things to address the issues with subscriptions and delivery of content on iOS devices. They first launched iTunes app subscriptions in February, making it easier for users to subscribe to newspapers and magazine with their existing iTunes accounts. Then at WWDC the company announced Newsstand, a new unified virtual shelf on iOS devices for content a user is subscribed to. Adobe has already announced its publishing tools will be updated to take advantage of iOS 5’s Newsstand. The Financial Times is not the only publisher to find an alternative route out of Apple’s App Store, as Amazon released a web-based version of its Kindle reader with direct integration with the Kindle Store.

Both the Financial Times and Amazon couldn’t comply with Apple’s subscription rules, even after Apple slightly modified them to open up to more publishers in June.