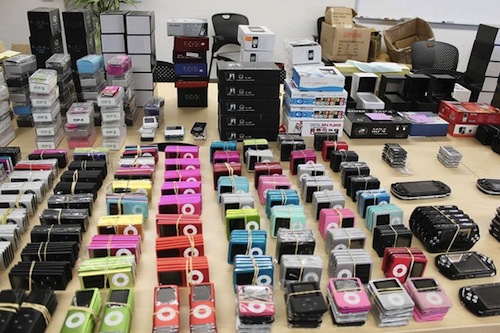 The Los Angeles Port police has seized thousands of fake iPhones and iPods coming from China in an operation that prevented these counterfeit models from ending up on the U.S. market and generate $10 million in revenue. The models, shipped from China as “replacement parts” and re-assembled to look like old Apple devices, were so similar to the original ones buyers could recognize the scam only when trying to sync them with iTunes.

Two brothers were charged for the sale of counterfeit goods and bank account records also revealed the operation had already generated $7 million in revenue. That’s quite a business for fake Chinese iPods. Apparently, the guys behind these devices thought it might be a good idea to replicate older iPods and iPhones rather than the most recent iterations.

We have seen lots of fake Apple products in the past, and it’s good to know police is always working to prevent them from ending up on customers’ hands. With the iPad 2 coming soon, I guess we’ll see several fake “used iPad 1” in 2012. [via Cult of Mac]